Following the sudden passing of Kikka Cavenati last October, her partner and co-designer is paying tribute with Swarovski tears 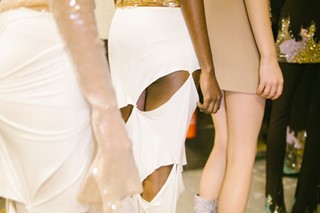 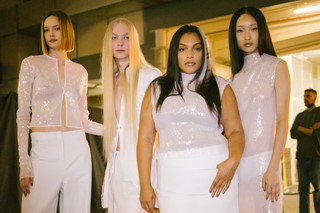 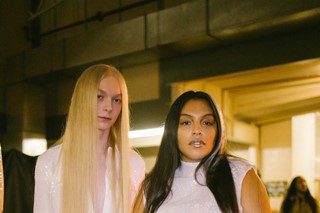 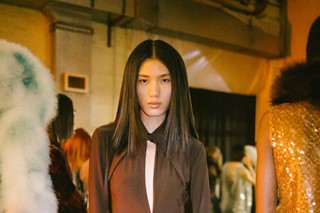 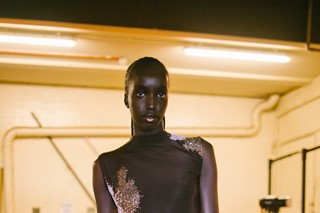 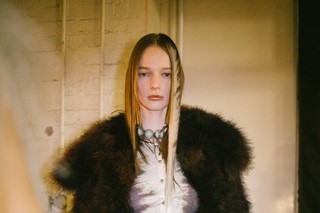 Marco Capaldo is sitting alone in a vast, white studio in North West London. Behind him is a rack of clothes, some bristling with feathers, others weighed down by hefty crystal embellishments, while a couple of skimpier pieces seem to have twisted in on themselves like popped balloons. “It’s been an emotional season,” he says, “but the most beautiful things have happened.” Last year, on the third Monday of October, the designer lost his partner and 16Arlington co-founder, Federica Cavenati, to a short and sudden illness. In the months that followed, Capaldo found himself wading through a series of uneasy firsts, which culminated last night as he debuted a new collection without, but in tribute to, “Kikka”.

Since the duo launched the brand in 2017, 16Arlington has become a byword for gorgeous VIP party girls, bringing a Bob Mackie meets Euphoria flounce to the red carpet in marabou plumes, sparkles, and risqué cut-outs. And despite approaching this season from a heavier place, Capaldo has still managed to buoy himself on frivolity. “I think everyone expected this to be a really dark and painful collection but Kikka was always the opposite. I wanted it to feel like there was a light shining across all these pieces.” As such, chocolatey leather coats and wide-legged pants were scratched at the seams as if they were sun-bleached and swollen fur jackets were dyed to imitate watery reflections before the show reached a celestial finale of second skin slips, forged from iridescent, liquid sequins.

The silhouettes of AW22 seemed to graze the body more than cling, with the brand’s sphincter-like LBDs and corseted pieces left on the cutting room floor. “Anything that felt restrictive was instantly phased out. I always knew this had to be uplifting and fresh”. For Capaldo, the act of making clothes and the act of mourning became one and the same. “I spent so many afternoons just sitting at my desk in tears that at one point little puddles began to accumulate on some fabric swatches I had laid out. I thought that was quite poetic,” he says, providing a backstory for all the Swarovski crystals that were splashed across lilac grey blazers, slit-legged gowns, and that jangly mini dress made from glass, tear-shaped beads. “All those painful moments opened parts of my creative soul that I’ve never accessed before.”

This season also debuted the brand’s first foray into shoes and bags, which had long been an ambition of Kikka’s. “I've bitten off way more than I can chew, probably as a survival mechanism, but she had such a passion to expand into other categories.” Though it felt like Capaldo and Cavenati could have been conferred the same mind at birth, often designing the exact same pieces by accident, this time he found himself tuning into her own tastes more than ever. “I overheard a member of our team asking what the collection might look like if Kikka was still here and another said: ‘It would be exactly the same, I can see her wearing every single look’. From that moment it all became very simple. Even when we were casting models I’d zone out and see Kikka standing there”.

“Not only have I designed this for her but, in a way, I’ve designed it with her,” he says, explaining how he developed Cavenati’s sketches and used feathers that had previously been treated by the late designer herself. “I know what Kikka would think. I can hear her voice through everything, but we used to challenge each other and it’s so difficult being on my own.” As anyone who has experienced loss will know, the impulses he is describing – to share good news, to ask for direction, to have a moan – do not end with death, but the impossibility of any response comes like a sucker punch. His words begin to fragment. “There were always two voices, it’s just, not having her affirmation has been really hard.”

From Shygirl and Amal Clooney, to Billie Eilish and Lena Dunham, Capaldo and Cavenati owe much of their success to the way in which 16Arlington has aligned itself with celebrity culture – even if clothing is perhaps the only thing these people have in common. “Why can’t they all sit at our table? Why can’t they all exist in the same world?,” Capaldo says. Of their patrons, however, Dunham has taken on a talismanic role in the label’s coming to be. “We were all doing a last minute fitting in our studio when we got an email from the British Fashion Council accepting us onto the London Fashion Week schedule for the first time. Kikka said Lena was a good omen and asked her to walk our first show. That was such a meaningful moment in our journey.” It’s appropriate, then, that the actor should pen the accompanying show notes for this past weekend.

“Marco loved and appreciated every fibre of Kikka as an artist and a woman, and that is one of the central ways she lives on,” she wrote. Of course, we are hard-wired to treat mortality as if it were negotiable but when death does arrive, its permanency can feel obliterating, like the thrum of a gong. So, we desperately try to keep those who have passed alive, to somehow keep them with us and drown out the sound. “The fact that I can continue something that we started together and talk about it and showcase it to the world… it makes me feel like the luckiest and unluckiest boy in the world,” Capaldo says. And though he’s now embarking on a new chapter without Kikka, he has packed her dreams with his own, in feathered trims, sequins, and Swarovski crystals. “I know I said this one’s for Kikka, but they all are now. Kikka lives on through this.”