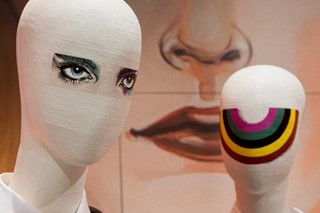 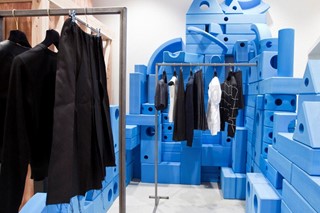 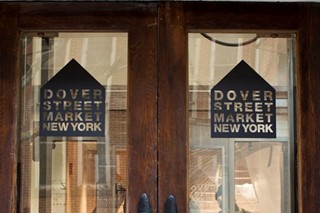 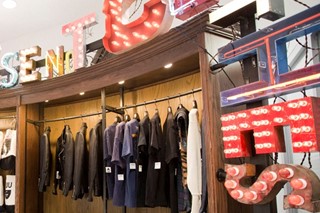 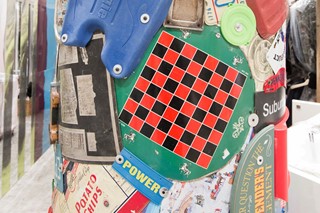 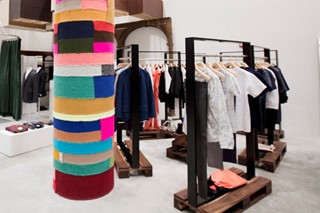 Rei Kawakubo has never shied away from imagination, which – more often than not – has birthed designs that shift boundaries and redefine fashion in a way that it has never been seen before. Almost a decade ago, she channelled her visions into bricks and mortar, pioneering a new conceptual approach to retail that created a global fashion landmark in the process – the multi-story fashion department store Dover Street Market in London.

Tomorrow the founder of Comme des Garçons will open the doors to her third store, this time in New York, following the 2006 opening in Ginza, Tokyo. Adrian Joffe, CEO of DSM, spoke with us ahead of the opening in regards to the now-trio of stores, "Each one has its distinct design and feeling yet all share the same spirit".

While Kawakubo has taken on most design elements herself, some labels have been given free visual reign. Prada's retail space, which sits on the 7th floor, has taken on the brand's SS14 aesthetic, comissioning artist Gabriel Specter, who helped design murals for their Milan show space, to paint a set of one-off mannequins which will adorn the polygon-shaped room. While other spaces will see limited edition designs, from brands such as Simone Rocha, Greg Lauren and Louis Vuitton, being sold in honour of the opening.

Other notable spaces include the DSM Showroom on the 4th floor, which offers young designers like Lou Dalton, Phoebe English and Craig Green a platform in which to share their unique visions. It's courtesy of concepts like these and DSM's unfaltering support for young talent which has seen the store set the benchmark for fashion retail, cementing DSM as an institution that allows an influx of new designers to share the stage with more established names such as Rick Owens, Christopher Kane and J.W. Anderson.

Ahead of the opening we asked a handful of young designers to tell us what DSM means to them.

“Dover Street Market have been very supportive, giving me a room to grow through special projects. Comme Des Garçons are inspiring for their individuality and independence and for Rei Kawakubo's unique vision.”

“When I was at uni DSM opened and it was such a revolutionary concept in shopping.  I remember seeing Hedi Slimane's furniture taking over one whole floor. I love the volition that Comme des Garçons has, with no limits attached and I think that is what the industry needs:  The idea that as much as the clothing is important, all other emotion's effects in shopping and clothing are important. When I was asked to do a 'pop up' I was very, very, very excited because being stocked in the store since the beginning of starting my label, being able to do an environment around my product is extremely rewarding and exciting and gives me another challenge.”

“As a kid seeing the wares of Comme des Garçons grace the catwalk was forever inspiring, A force to be reckoned with in the shape of design is Rei Kawakubo. I dreamed to work for someone like her and then when DSM came along to be stocked by such a store. One of the two is no longer just a dream but a reality. It makes all the blood sweat and tears all worth the while when DSM comes a knocking and wants to place an order. I feel like a very lucky girl to have the Lou Dalton collection in London, NYC and Ginza – not bad for a lass from Shropshire..  I got to meet Rei earlier this year, it was a surreal moment, very unexpected and yes, to date the highlight of my time in fashion.”

“Dover Street Market has a very important place in the heart of our company, as they were our first ever stockist. Their vote of confidence was the catalyst to launching the label – they were our beginning. Their single minded dedication to creative output gave me faith in the creative process and its value in the world at large. Rei's prolific work-making is a great inspiration, every aspect she approaches comes from a very pure creative strain, and her productivity continually has conviction and contemporary relevance; she is a designer who can transend time and cultural barriers.”

“Comme are a huge influence on most designer's work whether they realise it or not. They are an incredible brand and I feel very excited and fortunate to be able to work with their Dover Street Market stores.”