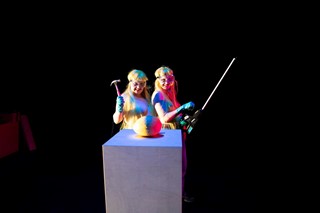 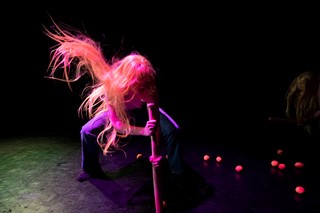 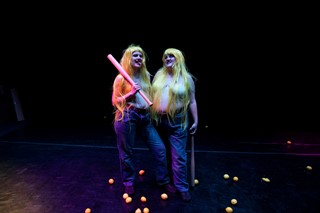 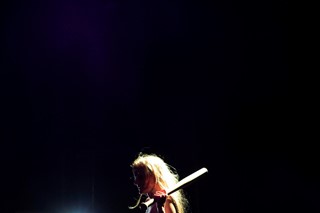 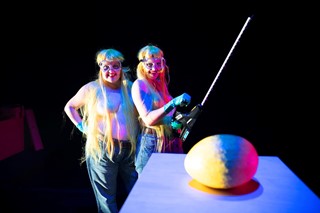 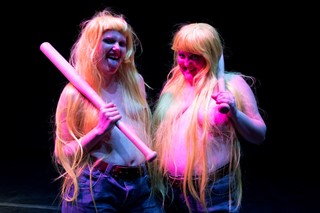 A bacon-scented candle, a Nicolas Cage sequin cushion, roast beef flavour bath salts. All manner of real-life Amazon pages flash up on screen at the beginning of Prime_Time, a play ruthlessly addressing the tech company’s worldwide dominance with a murderous fantasy centred on its bald-headed founder.

The show’s creators, In Bed With My Brother, are Nora Alexander, Kat Cory, and Dora Lynn, an experimental theatre company. When Dazed speaks to them on Zoom a week before Prime_Time is set to premiere at the Barbican, it’s still not finished. “Usually when we make shows, we have ideas then have to pare them straight back,” Cory explains. “But this time we’ve got some money behind us so it’s like, oh, we can really have chainsaws on stage and go up on scissor lifts and do strange things. It’s going to be interesting but it might be a bit of a panic.”

The idea for the show came after Alexander, the company’s off-stage producer, was browsing Christmas temp jobs and came across a load of Amazon operative positions. “You realise that, not only do they sell us everything, they employ loads of people, they run the internet, they own the internet,” she says. “We started looking into Jeff Bezos’ wealth and moon expeditions and were like, this guy is literally on a one-man mission to monopolise the world.”

The trio began researching ancient Amazonian women: long believed to be a figment of Greek mythology, but archaeological evidence has more recently appeared to confirm the presence of horseback-riding, bow-wielding female tribes who fought along their male counterparts. “We’ve come so far in our history of the world, and we’ve still got this bald white man running everything and creating our future, like what the fuck?” laughs Alexander. In line with depictions of the warriors throughout history, Prime_Time’s heroines are naked from the waist up throughout the play.

Throughout the show, Cory and Lynn improvise in real time with Alexa. “Alexa, why is Jeff Bezos so bald?”, “Alexa, how do you dispose of a body?”, they ask their blinking robot co-star. They also ask her to fart. A recurring topic is Bezos’ phallus-shaped rocket, and the infamous leaked 2019 dick pic which mysteriously disappeared from the web. “The only thing we can do is empower ourselves and our audiences by emasculating him. It's a bit tragic that the only thing we can do is, like, neg you for being bald,” Alexander says of the base, childish humour of the show, that nonetheless has us laughing at lines like: “All that fucking money in the world and you still wear those shit jeans”.

“That’s something that cyberfeminists do really like sickly, just take the piss out of the size of someone’s knob – going back to the basics of, like, you’re nothing. That really speaks to our generation of memes and trolling, it’s like: what is the end of this internet generation, how is our civilisation going to pull this back together? Because we’re just running round in circles blaming each other.”

“(SOPHIE’s music is) hyper-femme but also brutal, which I think is the main feeling we have behind the show” – Dora Lynn

Earplugs are offered at the beginning of the show, as Prime_Time is soundtracked by the synthesised bubblegum beats – and sometimes screechy tech – of SOPHIE, with tracks like “L.O.V.E.” and “Immaterial” scoring acts of violence to pieces of fruit (representing both Bezos’s bald head and our impending climate disaster). “It’s hyper-femme but also brutal, which I think is the main feeling we have behind the show,” Lynn says of their choice to use the producer’s music – a decision that was made before SOPHIE’s tragic death. “It’s us dancing around with our tits out in big wigs, but we’re still gonna kill you.”

As someone who playfully poked at capitalism, advertising, and gender binaries through her music, Dazed suggests that SOPHIE would likely have embraced the concept of the show. “Maybe... Hopefully we don’t just undermine the brilliance of the music with our stupid farty show,” laughs Lynn.

Prime_Time is showing at the Barbican until Nov 6