We speak to the internet it-boy and Virgil Abloh collaborator, who, alongside photographer Noah Dillon, is making his art world debut with a take over at Milk in New York 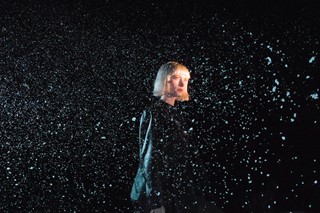 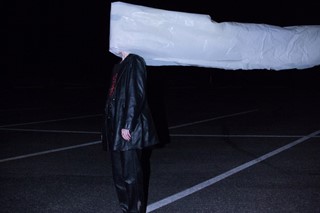 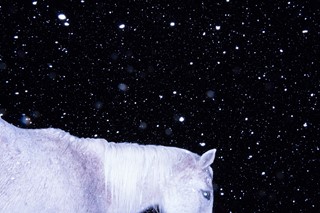 Any teenager with an inclination towards cultural zeitgeists knows about model and internet it-boy Luka Sabbat. He burst onto fashion’s radar when Virgil Abloh cast him in the Yeezy Season 1 presentation and he has since graced the pages of Dazed’s “States of Independence” issue in 2014, been shot by Ryan McGinley for Calvin Klein, Harley Weir for Hugo Boss, and Franco Pagetti for Dolce & Gabbana’s “millennial campaign”, amongst many others. His Twitter boasts over 100k followers – one of them being Colorado-raised artist Noah Dillon who forged a friendship with Sabbat through the platform two years ago. Now, their friendship is manifesting in the real world with a photo exhibition entitled Hot Mess – which the teens will open this Wednesday in the midst of New York Fashion Week. Hot Mess will see the duo take over the legendary Milk, which is giving them free reign to create any content they want, by utilising its VR department, photo studios and inviting their community of notable collaborators to take part in a futuristic “residency”, of sorts.

With creative direction by Sabbat and photography by Dillon, Hot Mess is the two-year culmination of trips to cities such as New York, Los Angeles, and Paris – captured in-between fashion weeks, parties and other moments of debauchery. With subjects found via Instagram or cast from the streets, Hot Mess acts as the jumping off point for the two's ambitions to start a creative agency where they aim to produce creative and photo projects for brands – such as Virgil Abloh’s OFF WHITE – and people that are looking to collaborate with them.

Below, we caught up with Sabbat at Milk, while Dillon dialled in, to find out more.

How did Hot Mess come to be?

Noah Dillon: Luka first hit me up on Twitter and we flew to LA and started shooting. Initially, it was going to be a small gallery, but then one thing turned into another and we shot in more cities, getting better photos and we realised that Hot Mess was way more than the name of a gallery. It’s branding us as a creative team – Virgil (Abloh) hired us in Paris to do a project that is coming out soon (OFF WHITE’s latest look book). We’re still not even sure what we are, we just know we’re a creative team and the possibilities are endless. It can go from photography to film to music, to creative direction. It’s just the beginning of something that can flower out.

Definitely, and it seems like a crossover between fashion and art makes sense for you. What motivated you to do a project like this?

Luka Sabbat: My whole thing is gearing away from that. I felt like it needed to be done because I had all these ideas and it was like, how can I get them out? People were looking at me as just a model and not seeing that I could actually make stuff. Art and fashion are basically hand-in-hand, it’s hybrid. It all falls under “fashion.” It’s like fashion clothing, fashion magazines posting about it. It’s basically fashion, it’s just artistic.

“People were looking at me as just a model and not seeing that I could actually make stuff. Art and fashion are basically hand-in-hand, it’s hybrid” – Luka Sabbat

Is there an overarching theme or message to the work and that you want to convey to the world?

Noah Dillon: For me, I’m from the middle of nowhere – my town has 5,000 people. There are so many kids out there who don’t believe in themselves and then look on the internet and see maybe there’s a chance they can do something. There’s so much talent out there but it just gets wasted. Kids are just wasting their potential because they don’t believe in themselves, they don’t think it can actually happen. Luka and I worked our asses off for two years and it’s actually happening now. I just want to inspire those kids that they can actually do something. I also just want to put out good work. Most of the work I see out there, including half of the stuff I do, is trash, low-key, and I just want to elevate the game.

Luka Sabbat: If you want to do something, you just have to actually do it. So many kids tweet about things like, “I got this idea,” or “I got this brand,” but where they at though? Where are they?

Noah Dillon: Kids think that if something doesn’t work out for them in a week or a couple months, it’s like “I’m onto the next thing.” All of the artists that people look up to most of the time have spent two decades of their life taking photos for one exhibition.

Luka Sabbat: Those kids want to be that 50-year-old guy by tomorrow, but it’s like bro, you’re 16.

Does one of you lend yourselves more to the artistic side or is it more of a symbiotic relationship creatively?

Luka Sabbat: I can’t take photos, Noah takes photos. This project would be impossible without him. I find all the clothes and put that together, etc. We both have good ideas on how stuff should be shot. He knows all the technical stuff and how to actually do it.

Noah Dillon: People underestimate Luka because he’s a model. People don’t like to see people who are solidified in the industry branch out. Luka has probably just as good of a photographic eye as I do – he’s a natural. I always tell him that if he picked up a camera and worked at it for a year, he would be really talented. It’s really natural with our creative process and it took us a few years to hone that in. When we first met in LA, it was us running around and me shooting. When we went to Paris, we had a really smooth creative process.

Luka Sabbat: He would shoot, hand me a camera for like T-minus five seconds, finish off a roll and then hand it back to him.

Can you talk about your time shooting together in Paris?

Luka Sabbat: Anything that’s not on the internet, will never be on the internet. It was pretty crazy. It was fashion week, so we went to shows, showrooms, hung out with people, went out but also woke up mad early and stayed up mad late to go shoot and skip parties and shows.

Although social media has a fleeting lifespan, it has the advent of reaching a much larger audience than the permanence of a gallery. Why choose to do something physical?

Noah Dillon: People always say that an exhibit, or something in person, like a gallery is more “real,” but I don’t know these days. Things on the internet, even though they are fleeting, are just as permanent. Not that many people will see the gallery as opposed to how many people are going to see the work online. At the same time, there’s a time and a place for everything – for the physical interaction. I wouldn’t be here if it wasn’t for me scrolling through pages of photos online.

Noah Dillon: The first time we met, he didn’t know me at all. I could have been some weirdo. We met for the first time and immediately, the vibe was there. Luka was like, “we’re going to be good friends.” We started making stuff and became good friends. Everything always works seamlessly.

Luka Sabbat: In terms of arguments, we have cognitive discourses.

The power of having a collaborative working relationship is immensely important for developing not only your art, but also your technique. Have you grown artistically since you started the project?

Noah Dillon: 100 per cent. It’s like night and day. At first, we were working off of Helmut Newton inspiration, but now we have our own aesthetic, hands-down. And people are going to see that.

Luka Sabbat: We figured out our own vibe. When you see it, it makes sense. There’s stuff we’re going to shoot for other people under Hot Mess, but you’ll always be able to tell it’s us.

Noah Dillon: The creative process is so important, people don’t realise. The way we go about it is so different. People say they cast off Instagram but they pick kids who have 90,000 followers. We literally found weirdos who we can’t even find on the internet anymore.

Luka Sabbat: Some of them deleted Instagram. Some of them had 400 followers. We didn’t shoot one “clout” person or influencer.

“People say they cast off Instagram but they pick kids who have 90,000 followers. We literally found weirdos who we can’t even find on the internet anymore” – Noah Dillon

What’s next on the horizon for you both?

Luka Sabbat: We want to do a Hot Mess tour where we do this show in four other cities around the world. And then we want to turn Hot Mess into a creative agency/platform once we have all the connections to be able to sign kids who are photographers to help them.

Noah Dillon: Hot Mess is about incorporating all the kids that don’t have a voice and everybody. Rather than exclusivity and influencers and the people that the media cares about, it’s about giving everybody a shot. I just want to reiterate huge thank you to (Milk’s co-founder and creative director, Mazdack) Rassi and Clark (Sabbat, Luka’s father). All these corporations didn’t really believe in us, all these people in power didn’t believe in us, and (Rassi’s) giving us a crazy opportunity. This is the future of how stuff is actually going to go. It’s always a team effort.

Do you have any advice for younger generations starting out?

Noah Dillon: We’re not even successful yet. But just to work hard if you think you have a good idea – we’ll give you some advice maybe in a decade.

Luka Sabbat: I feel like there’s no actual advice we can give kids. I can tell them to “just grind, just do what you gotta do, pursue your dreams,” but it’s like, I don’t even know where they’re taking me yet. How am I in the position to give kids valuable advice? I can give them pointers and guidance to where I am now, but where I am now is barely where I want to be.

Noah Dillon: Everybody has a different path.