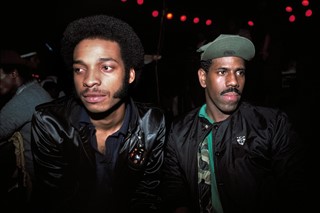 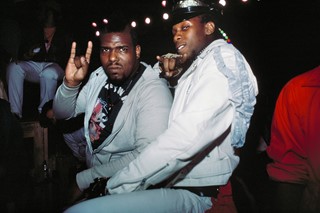 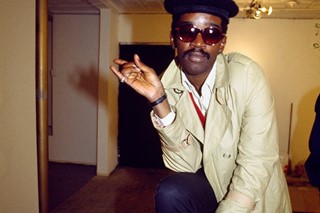 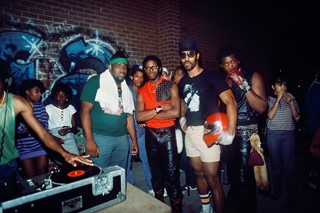 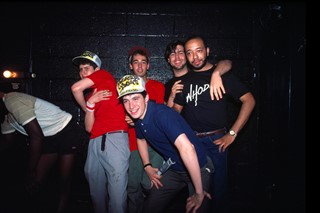 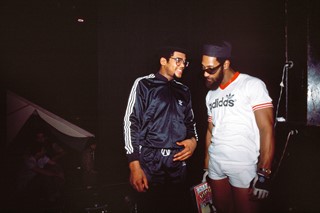 Sophie Bramly is a self-confessed “woman with a million lives”. After hip hop sparked a move from her native home in France to New York in the early 80s, she found herself flung head first into a burgeoning music scene and quickly befriended the now-legendary Afrika Bambaataa, Futura and Fab 5 Freddy. Capturing them at club nights, MC battles, but also, forgoing the glitz typically associated with American photography, Bramly was on the hunt for something raw. Being invited into their homes and backstage, her images trascend typical entertainment photography and instead feel like something you’d find on your friend’s camera. “I was flabbergasted when I first saw the NYC breakers at a party downtown, then a friend introduced me to some rappers and after that I felt like Joan of Arc on a mission,” says Bramly. “I dropped everything else I was doing and I followed them everywhere they went for four years.”

What was that scene like back then – at its peak?

Sophie Bramly: Back then it was probably no more than one or two hundred people in the whole scene, and everyone knew everyone. I had my homies that I photographed more than anyone else, artists such as Fab 5 Freddy, D.St, Afrika Bambaataa, Zephyr and Futura. The scene now really has little to do with it, because now they are worshiped,while back then no one cared them, not even the black community. No one thought it was a business either. I remember record company people telling me, "All rappers can do are singles and there is no way to build a career on that." So it was just small independent labels for kids still living with their parents. There were a few clubs uptown and downtown where we all met over the weekends, and – as in any situation where people are perceived as outcasts – within the scene they were all helping each other. So much so, that one of the words that you would hear most when saying hi to someone was 'respect'.

It was also incredibly joyful, and we were all getting high on adrenaline; the effect of things slowly picking up, the vague signs of success on the horizon. Anytime one was signing a record deal, getting a show to perform, was hired to dance in a movie or anything else, got everybody else was thrilled. It meant that the hip hop scene was getting slowly recognised and the benefit was for all. You have to remember it was just a bunch of kids who had to be home in time for dinner!

How did you go about getting these now-historic shots of these people? Who, I guess, were relatively unknown back then…

Sophie Bramly: Well, you know how the first people to identify talent are the artists themselves. So anytime someone was about to emerge, somebody else was suggesting that I do something about it. I was always aware of who to film. And then, so many of them were my friends, just following them and taking pictures was enough. We were probably four or five photographers around the scene, but, not being American, what I did was different. I wasn’t looking for glitter, but for intimacy; people in the privacy of their homes, with their parents, backstage before or after the show, any moment when they are just being themselves.

Could you share any great anecdotes of, say, RUN DMC, the Beastie Boys or Afrika Bambaataa?

Sophie Bramly: Bambaataa was a quiet person but often cracking jokes and laughing with a very sweet laugh. Any time he came to France, he was crazy for crêpes! The Beastie Boys were so young (around 16, I think) and had so much energy. I remember filming them once on a rooftop, and the PR from the record company was so worried on how to keep them still while all was being set up so someone went looking for porn movies. We would probably go to jail for that today! It’s hard for me to speak about Run DMC because anytime I saw them, Russell Simmons [Def Jam’s founder and Joseph’s brother] was around, and he was way more talkative, laughing all the time, and having such a gigantic amount of energy there was no room for anybody else.

When you left NY to move back to France, would you say you brought brought back hip hop with you? In the sense of that New York essence of it…

Sophie Bramly: I was sharing a loft in Noho and one day D.St spat outside a window and the landlord – a German painter – decided that it was enough, she wanted me out of the building. At the same time my flat in Paris had a problem, so I came to fix it and it was exactly when European magazines like The Face or Wiener, wanted to talk about the burgeoning scene. I was suddenly asked to sell my pictures, for the first time in three or four years. Sometimes the press thought it easier if I write the article to go along with the photos.

And French DJ Sidney started a TV show on hip–hop, and wanted me around. So after all these years of not making any money, my work was starting to pay off, and it was nonsense not to grab the opportunity and move back to France. But that only lasted three years. After that, MTV called me to be part of the team building MTV Europe, and they also asked me to do a rap show. I didn’t bring Hip Hop to France, it was there already, but I was part of the few people going back and forth between Paris and NYC, and bringing back vinyls, ideas, contacts.

You once said, “I’m not a pioneer, I’m an intuitive". What did you mean by that?

Sophie Bramly: That’s more what I am. Sometimes I am grabbed by something – rap in the early 80s, the Internet in the early 90s, women’s sexuality for the past eight years – and I just have to give it all my energy, without even understanding why. For a short while, as a kid, I wanted to be a lawyer before I switched to art. But I guess defending those who need it is still in my veins. I’ve embraced people or subjects that people don’t care about yet, and have been part of groups pushing things forward until they get everybody’s attention. I see myself as a hyphen, using images, rather the words to link people.

You were one of the first photographers interested in the burgeoning hip hop scene – why do you think others weren’t paying attention when you were? And what drew you to it?

Sophie Bramly: I would have a tendency to ask the question the other way around; how come people didn’t see what I saw and didn’t feel what I felt? How come they didn’t see the magic of what was going on? That’s the part I don’t get! But I remember August Darnell from Kid Creole and the Coconuts asking me what was it that I loved so much about rap. I answered that it was its energy and he looked puzzled for a second and then said, "Oh, just what rock 'n’ roll used to be about."

It told me a lot about marketing. It is never enough to be a great artist or part of a new culture if you can’t breathe the desire into the public, if you don’t help them understand they want it, they need it. Well, maybe social networks can help now, but you still need to wrap your story in a most desirable skin.

“I’ve embraced people or subjects that people don’t care about yet, and have been part of groups pushing things forward until they get everybody’s attention. I see myself as a hyphen, using images, rather the words to link people” – Sophie Bramly

Could you tell us how your work with the hip hop scene evolved into your next move with founding Secondsexe?

Sophie Bramly: I have asked myself the same! How come female artists (at least in France) were not expressing themselves in that scene? Once again, I had to go on the battlefield and help. The hyphen again!

This year for French-German broadcaster Arte I did a series of four documentaries on sex and music, and realised how much growing up on black music – where the main subject is always sex – has helped me tremendously be much more free about it then a lot of people. Music is sex, and I think I can almost tell how people have sex according to what they listen to. And sex is sweet music. I don’t see my different moves as irrational.

Sophie Bramly: I had seen porn movies and didn’t feel very concerned. I can’t say there was no excitement but it wasn’t something I wanted to watch, something disgusted me and it wasn’t sex. It took me some years to realise that what was disgusting to me was that women’s pleasure was so phoney, or only made to make men happy. So when I started thinking about doing SecondSexe I also had in mind producing movies where women would express what ever fantasies they had and show how they felt their pleasure or their orgasms. So I asked all my artist friends, and more, to come and experience this with me.

I’m happy that more and more women are now looking into it, there is no way – for me, and for Simone de Beauvoir, who’s book name I payed tribute to – that a woman can consider herself emancipated if she can’t express her sexual desires. And I hope a market grows and shows that women have other things on their mind than seducing when it comes to sex.

Finally, if you could name one track or album that influenced you the most or could sum up your life so far with all these experiences, what would it be?

Sophie Bramly: Any James Brown or Al Green track does the trick. I have been listening to them since I was five or six. Al Green is the sweet sirup that get you horny, then comes James. Prince too. And then as far as rap records are concerned, it is more a morning thing for me, something that gives me energy to start the day. Run –DMC’s Walk this way has been hitting me again recently, which is why the current show in Paris is called Walk This Way. Songs summing up my life could be "Get On The Good Foot” or “I Feel Good”.

Walk This Way will be on show in at 12 Mail gallery in Paris until 29 November when the French capital will welcome the Red Bull BC One World Final, for more information on the exhibition click here