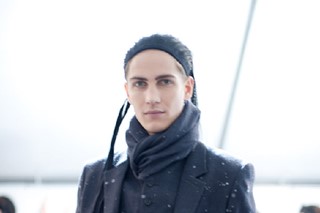 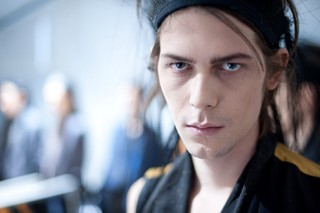 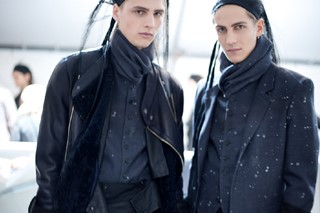 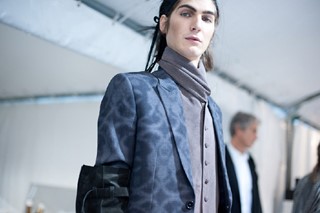 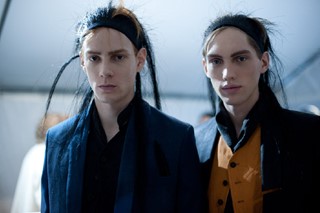 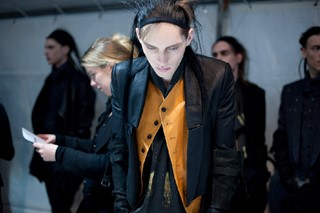 Adding a strong dose of colour to her otherwise monochrome collections, Ann Demeulemeester yesterday showed red, blue, gold and orange as part of her Autumn Winter collection. Silk trousers underneath a transparent net layer added a flowing element to the show at her frequently used south Paris venue. Leather featured heavily as usual, both as jackets and as bottoms. Said jackets were often cropped, even when they came out as evening jackets with two parted lapels. Also prints were on the Demeulemeester menu; an abstract paint print, pinstripes and splattered dots were all added to the collection, which - except for the mentioned strong colours - featured black, white, grey and beige. It was an interesting and energy injected show from Ann Demeulemeester, who was cheered on from the front row by Patti Smith.

DD: And what was the conclusion, what is his look of today would you say?
Ann Demeulemeester: Eccentric, elegant, colurful and full of texture. He had a rich spirit so the collection is full fire, which was the gold in the show. The sky was there as snow prints and the water is there as aquarelle prints. He's eccentric so he's wearing double layers, two coats for example. Movement is important so the jackets have horizontal cuts which improves the movement.

DD: What was that in the hair of the models?
Ann Demeulemeester: It was horse hair because mythology is very important in the Blake story, so the hair represents the horse in the sky from Blake's stories.

DD: What kind of fabrics did you use?
Ann Demeulemeester: Leather is always crucial in my collections, and they contrast with the silk transparency of the collection, it expresses the free spirit. I find it masculine and intriguing.