Current 93’s shamanic genius on life in the Apocalyptic World

Taken from the July issue of Dazed & Confused:

STRANGE BOOKS BEFORE HIS BALLS DROPPED

“I was born in Malaysia in 1960. Paradise gained. In 1970, I left for England, where I attended an all-boys boarding school. Paradise not only lost but then packed with the sex of ghosts and kicked into the bonefire. Welcome to NeverLand.

What drove me on then: I loved CS Lewis, Tolkien, Taoist temples, the New Testament, MR James1, Christian apocalyptic, the apocryphal gospels, Aleister Crowley and Qabalah. All this before my balls dropped. I discovered the apocryphal gospels through MR James. I discovered Crowley through buying his Diary of a Drug Fiend at Kuala Lumpur airport when I was 11. The other boys at the school were frightened by my reading matter. Crowley wasn’t big with corduroy boys. My post was opened by the headmaster there; he was later sacked for playing a little too freely with his wards. Hop and skip into the Bad PicNic, made worse by the school being extensively haunted. Welcome to Old England.

After leaving university, I had a brief dalliance with the often dysfunctional family (sic) of Psychic TV2, which was briefly fun and then not. I was impelled to create a music that would channel all my obsessions. So HeyHo, Current 933. What drove me on then as now was my sense that time was running out, that the apocalypse was also personal and that playing hide and seek behind all the cartoon messiahs was the Messiah with both peace and a sword. I felt I was creating a new planet, built out of Noddys and Kierkegaard and the legends of AntiChrist and plainchant and Blue Öyster Cult and the Holy Bible and amphetamine easy. I was running on BeastFoolFuel and I loved it. My first album as Current 93, Nature Unveiled (1984), was made up of two long, apocalyptic tracks about the Second Coming and AntiChrist – hence the lack of a hit single. Others with me on that first album were Steven Stapleton of the legendary Nurse with Wound, Youth of Killing Joke and Annie Anxiety4, with whom I was sharing a squat in south London, along with scores of liberated chickens. Also about to join Current 93 was the late Jhonn Balance5 of Coil and blessèd memory.

Your guide to a safe acid trip
Your History: David Tibet6 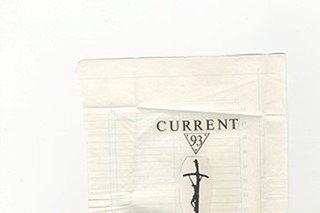 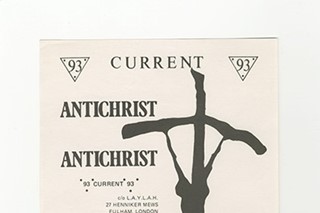 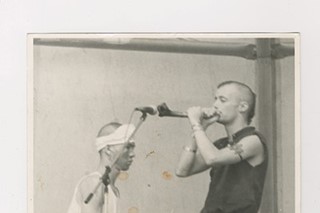 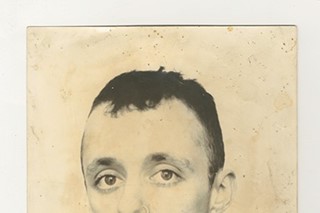 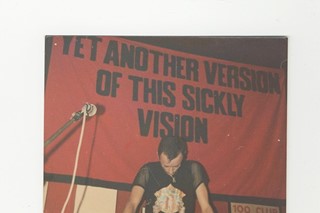 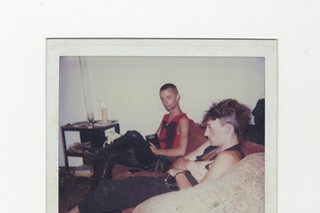 FALLING ILL AND FLEEING TO ICELAND

More albums skipped out – Dogs Blood Rising (1984), In Menstrual Night (1986), Swastikas For Noddy (1988), the last written after I had dropped some acid and seen a vision of Noddy crucified in the sky surrounded by mocking elves. And then I fell ill with a never-diagnosed complaint. I think it was The Sickness Unto Death but every Kierkegaard obsessive probably thinks the same. I was SickSickSick, and fled to Iceland to wait for the Black Diamond Express. Thank Aleph, it never came. I returned to England and started working on a new way of expressing old obsessions and new ones. I met Michael Cashmore, a superlative guitarist and songwriter, and together we birthed a new Current. And I also fell in love with the work of Shirley Collins6, Tiny Tim7, Louis Wain, Thomas Ligotti and Count Stenbock. Shirley was working in a Jobcentre, and cried on the phone when I told her how much I loved her music. She told me she was completely forgotten. She was so wrong. I released two albums by her and she credits me with bringing her name back from the dead and the dust. Career High, oh my!

I also became besotted with Tiny Tim, and meeting him was another ecstatic jump. I was beginning to meet some of the people who had most inspired me, and my joy soared. Then, almost simultaneously, I discovered the work of two individuals that were to have a life-changing effect on me: Edwardian schizophrenic cat-artist Louis Wain and Victorian arch-decadent Count Stenbock. Wain’s magical portraits of ecstatic landscapes and kaleidoscopic cats started appearing on my album covers and references to him – or words by him – in my songs. Count Stenbock’s morbid short stories and poems, shot through with his obsessions for young men, vampires and suicide, also haunted me. When I read that he spent his last months wandering around Europe with a life-sized wooden doll which he claimed to be his son and referred to as ‘le petit Comte’, I was OverMoon. That’s my kind of holiday! I was given, through the grace of G+D, signed copies of his books – printed at his own expense and of fabulous rarity – and decided to start republishing them as well as those many stories that had not been published during his life. Having printed some seven or eight titles so far, including a volume of his collected poems, I am now editing his complete works.

AN ALBUM FOR HIS LATE FATHER

Meanwhile, back in the Apocalyptic World, we were still recording and releasing. Thunder Perfect Mind (1992), Of Ruine Or Some Blazing Starre (1994), Lucifer Over London (1994), Soft Black Stars (1998) – some of the albums that still mean the most to me. Then three things happened which devastated me – the death of my father, my near death and the death of Jhonn Balance. For my father I wrote an album which I titled Sleep Has His House (2000), after a line in John Gower’s Confessio Amantis. My own slip away from the Reaper I sang about in the album Bright Yellow Moon, recorded as a joint album by Current 93 and Nurse with Wound. The threnody for Jhonn would take much longer, only being released in 2012 as “Jhonn,” Uttered Babylon. My father’s death affected me greatly, but Jhonn’s death – from alcoholism – almost destroyed me, as it did many of his friends. Waiting to hear, year after year, that someone you love has died, knowing there is no way anyone could help him, is a dismal experience.

What drove me on was my sense that time was running out, that the apocalypse was personal. I was creating a new planet

My next album was Black Ships Ate The Sky (2006), which dealt with the commercial and radio-friendly invasion of our skies by Black Ships Fleet of AntiChrist and the return of Christ. My albums on the Second Coming keep on coming, rather like the way Chicago named their albums. I met Antony Hegarty and we became great friends – Antony and the Johnsons were often our special guests, I released their first two records and they covered our song “Soft Black Stars”. I love Antony. Ant also introduced me to Baby Dee and Marina Abramovic. And I became friends with the ineffable Bill Fay, two of whose albums I released and who appeared with Current 93 on stage, as well as Rickie Lee Jones, QueenStar, who appeared on my Aleph At Hallucinatory Mountain.

I started painting Hallucinatory Prayers, which consisted of biblical verses written thousands of times in white ink on black paper. Revisiting my pubescence, I did an MA in Coptic8 and started translating mainly Sahidic texts. Then I began to learn Akkadian after dreaming of metal doors covered with cuneiform, which meant I had also to paint Pazuzu. Anaku pazuzu9, as the Akkadians wrote. A divorce occurred, thank G+D, and I painted a series of self-portraits of myself titled I Arose As Aleph, The Speller, The Killer to celebrate and publish as a book and record, featuring my hero Tony McPhee of the Groundhogs. In that same couple of years, three of my oldest friends died, including dandy Sebastian Horsley and Peter Christopherson10. Three cats died. These were bad times. My album Baalstorm, Sing Omega (2010) dealt with divorce and deceit, and HoneySuckle Æons (2011) with Sebastian and Peter’s deaths.

Signs in the stars now: I started a group with the astonishing James Blackshaw called Myrninerest, after Madge Gill’s spirit guide. I was OverMoon to exhibit my paintings at White Columns in New York City, and to learn that my archive is to be bought by a prominent US university. An exhibition of my paintings and archive is being arranged by Johan Kugelberg of Boo-Hooray in NYC, and my book of collected lyrics is published soon. I have met most of my still-living heroes, though Rob Halford and Cyndi Lauper still elude me. I have two cats. I am a bachelor boy who loves Akkadian and Sumerian. I look out on my garden, with a summer house full of unread books and a collection of original paintings by Aleister Crowley and Norbert Kox on my walls. I have lots of bibles to protect me from them. I collect glass animals filled with coloured sand and wooden Taoist gods. I think we may be living in the End Days, but since G+D has a quirky conception of time, I may not see him imminently.

My favourite quotations are Matthew XVI:26 and, ‘The greatest hazard of all, losing one’s self, can occur very quietly in the world, as if it were nothing at all. No other loss can occur so quietly; any other loss – an arm, a leg, five dollars, a wife, etc – is sure to be noticed.’ (Kierkegaard.) My favourite lyrics by myself are, ‘I drank HoneySuckle Æons / And toasted toys goodnight / But around the back / Of the bars of the City of God / The Night squeals and prays entrance / Attendance for the march.’

I am very serious about what I do, but I do not take myself at all seriously. Those without a sense of humour about themselves are already dead. If I sound like your kind of guy, write me while we’re still not raptured.”