From Fendi and Magliano to 1017 ALYX 9SM, here is everything you might have missed from the AW23 shows 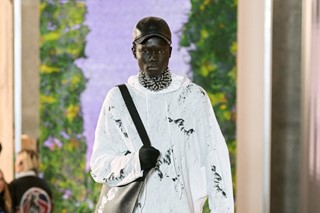 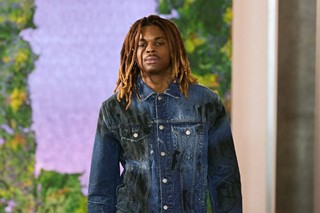 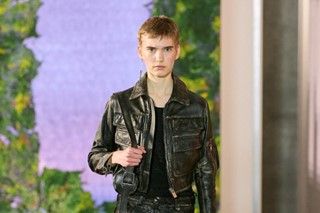 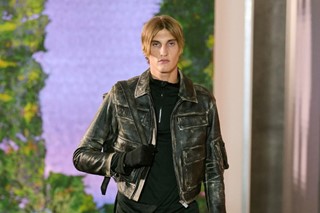 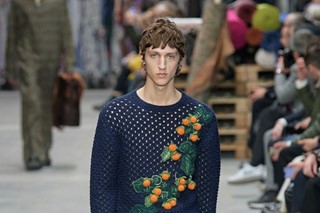 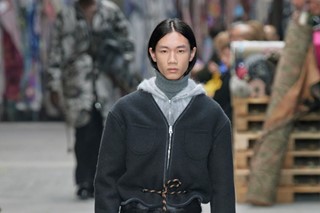 The AW23 edition of menswear shows in Milan have just come to a close, and, as the first fashion week of 2023, it christened a new mood for the year ahead. On one end of the spectrum was DSquared2’s high-octane ode to the 00s where models *stomped* and Charles Jeffrey’s theatrical engine room full of coal-smeared faces and monster-toed shoes. Then there was a distinctly stripped-back atmosphere, with Prada and JW Anderson cushioning models in plumped-up pillows and stark, cut-away clothing. As the fashion set trundles off to Paris, below, we round-up a couple more of the best in show from this season’s menswear shows.

With the ceiling illuminated like a giant pinball machine, the AW23 edition of Fendi was soundtracked by the father of Euro Disco (Giorgio Moroder) as Silvia Venturini Fendi sought to glamourise the word “cosy”. She flung huge swags of cashmere into poncho-jacket hybrids, sensible trousers were cut with a draped skirt, and sinuous knitwear slid off the shoulder. Leather jackets and jeans became gilded antiques with burnished and overdyed accents, there was a load of louche sequined tailoring, and sheer mohair knits offset by hulking puffer jackets. Perhaps the most playful touch, however, came when one model walked with a giant baguette bag – as in, not the It bag but an actual shearling baguette – slung over his shoulder.

Lots of designers were thinking about the restorative power of dreams this season, with pillows at Prada, JW Anderson, and a hinterland of fairies emblazoned across JordanLuca’s collection. Massimo Giorgetti did the same, naming his collection University of Dreamers in homage to Peter Weir’s Dead Poet Society. The whole thing mined the kind of clothing associated with campus novels and coming of age films: emo hoodies, Argyle vests, rugby sweaters, pin badge berets, and skew-whiff ties. Fitting, then, that Giorgetti should also stage his runway in Milan’s Politecnico University, and score it CCCP – an 80s punk band from Bologna (which is itself a historic student town).

Lots of suits! Lots of tailored trousers! Lots of monochrome! For AW23, Zegna did what Zegna has always done – that is, an impeccably cut, wide-legged and nip-waisted silhouette beloved of Milanese men with an appreciation of vicuna wool. Slate greys, buttery yellows, and merlot reds spoke to his well-read, well-paid attitude. But the collection was really about material innovation, about pushing cashmere into new fabrications: approximately 70 per cent of the offering was cut from the material, including bouclé jackets, boxy flannel shirts, and rain-resistant trench coats. It meant the usually imposing silhouettes associated with menswear were given a bit of levity. The collection also teased an upcoming collaboration with the LA-based label Elder Statesman – a slack lined, bobbled shirt in coral-red which will get its second outing in Paris next month.

Luca Magliano asked showgoers to get a backbone this season, with the word “no” writ large across the back of a grey, tailored blazer. Life is too full of yes men, and so the designer gave ample reason not to bend to the whims of others. Sombre and gloomy, AW23 was staged in the underbelly of a Milanese school with the walls lined in stacks of chairs. The models look as though they had been holed up for a while under there – tweed suits tattered at the hem, jeans soiled at the knee, cashmere sweaters deconstructed and then reconstructed. In a particular moment of desperation, there was even a lock of hair that had been fashioned into a belt. Unsettling and handspun, as if the borrowers had taken a pattern-cutting course.

To mark his first ever menswear collection under Etro, creative director Marco de Vincenzo looked backwards to propel himself forwards. He transported the label’s behemoth textile warehouse to Milan to stage a collection amid floor-to-ceiling rolls of vintage fabrics. Homespun and eccentric with chunky farm-to-table intarsia sweaters, slack-lined kimonos, low-slung denim, and clogs, the collection had an air of nonchalance – all fluid, unstructured shapes in fuzzy textures. But the clothes harboured a certain 70s charm, too, with high-waisted flares, tartan pantsuits, and long-lined tunics worn with a wardrobe-diver’s attitude. The 21st century boho mish-mash was perhaps best embodied by a men’s tartan maxi-skirt with a slit to the groin, which is fast becoming a thing on the AW23 runways.

For AW23, Matthew Williams hired American artist Mark Flood – famed for his “EAT HUMAN FLESH”, “MASTURBATE OFTEN”, “DRINK BLOOD”, and “FUCK THE ECONOMY” imperatives – to codesign his latest collection for 1017 ALYX 9SM. Models ribboned through the Spazio Maiocchi gallery where Flood is showcasing his most recent works. The collection itself played canvas for some of Flood’s most notorious pieces, emblazoning them across grubby hoodies, drop-shoulder t-shirts, Canadian tuxedos, and aqueous slips. Everything hand-distressed and charred, there was a doomsday mood to Williams’ AW23 offering – plenty of pieces have been purposely damaged in randomised areas so that they change over time, revealing new layers of fabric below. A massive painting may have projected “YES YES BLAH BLAH BLAH YAWN” over the runway – but AW23 was hardly tedious.

“Domenico Dolce reminded everyone that his father was a tailor,” one HFT member tweeted after the AW23 Dolce and Gabbana show – which featured hourglass blazers, flared matador pants, and flesh-toned menswear corsets. 81 looks keyed into a newfound simplicity this season, as the designer duo stripped away all the gaudy embellishments and brash prints to reveal the essenza – AKA essence, the collection’s title – of their work. Everything was black (save for a morsel of slate grey and two white suits) and they said the collection was almost “violent in its intensity” because of this. All the capes, boned girdles, and riding boots certainly cut an imposing figure when storming through the optic-white showspace.