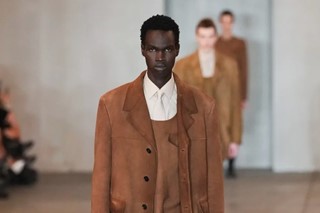 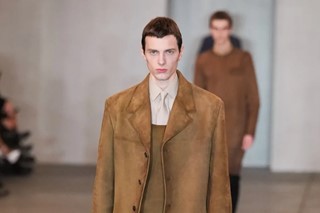 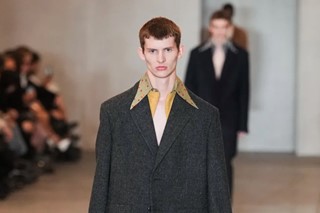 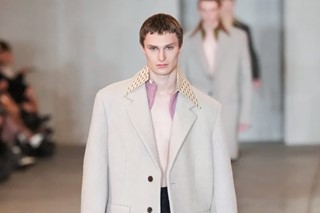 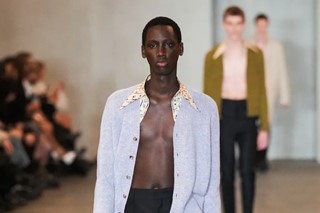 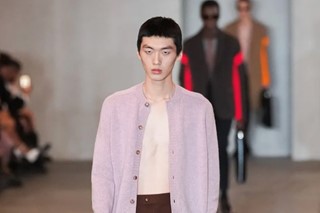 Prada’s AW23 show was staged in the brand’s headquarters (rendered a dimly-lit, concrete space) with its roof sinking to claustrophobic effect. This show was about “reality” and its crushing impact – AKA having a job, the phrase “cost of living” – was made known from the outset. But as a series of slim-line suits began to emerge, the venue illuminated with massive Art Deco chandeliers and tangerine scaffolding. If Prada’s last outing was nocturnal and sleazy with crumpled and sweat-creased fabrics, then this collection felt like the following Monday morning. “We always talk about reality, and we, as designers are very aware of what is happening, the problems, the difficulties. It is a complicated moment in the world – and we react to it. The most honest thing we can do is create something useful for people today – to face reality in, and frame the idea of our reality through clothes,“ Miuccia Prada said.

As classical music fragmented into an accretion of Jeff Mills’ head-splitting techno, the pendulum swung between the mundane and the menacing. There were pillow vests and duvet jackets with Prada tags left on, and the kind of metal-lidded flasks beloved of early-morning commuters, but there were also overstuffed bomber jackets, abattoir aprons, and bulwark-shouldered trench coats that cut an imposing figure against the models’ boyish frames. Perhaps the most enduring motif of the season was its detachable lapels – sometimes fuzzy, sometimes candy-coloured – which were often worn over bare chests, creating the outline of a tie on the flesh. It was as if the spectre of everydayness had been carved onto the body. When menswear (particularly on the red carpet) has become increasingly flamboyant, Prada and Raf Simons went spare and severe. Office suits jarred with fatigued parkas, corrugated metal tote bags, and weathered overalls, as the duo layered and reimagined humdrum workwear references.

“This collection is about archetypal clothing, about taking the recognisable but changing it through silhouette and cut – their form language is transformed,“ Simons added. The collection also marked three years since Prada and Simons started their collaboration, and at times, it felt as though there was a eulogy to Simons’ namesake label. All those hulking parkas, bomber jackets, and American Western shirts (worn with skinny-fit pants and clodhoppers) seemed to pay homage to the designer’s 27 year-old imprint, which he shuttered last year. But Prada and Simons have always been aligned in their thinking and so it would be remiss not to acreddit these particular styles to the decades of design that Prada itself has established. Their last womenswear offering was presented in a paper-made doll’s house, but the asceticism of AW23 was like a crash back to the tiring reality of human existence: its roof sinking again as the show came to a climax. Click through the gallery above to see the rest of Prada’s latest menswear collection.