The musician has swapped out the blow-up hot dogs and Blondie cosplay for Tom Ford-era Gucci, Gianni Versace, and rare Galliano

When Miley Cyrus announced the release of her *eighth* studio album – she had a Disney contract to fulfil – she bore her backside like a big old baboon. “New year, new Miley” was plastered across billboards in Milwaukee and electrical boxes in Buenos Aires with photos of the singer dressed in a pair of scarlet-red briefs from Tom Ford’s SS97 collection at Gucci. She did this because she made a Faustian pact with High Fashion Twitter, pledging never to wear anything made after the year 2005 in exchange for some then-and-now runway pics on the timeline… presumably. 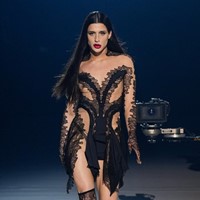 Here is some evidence: a lamé two-piece from Saint Laurent’s AW91 collection, a leopard-print slip from John Galliano’s AW00 outing at Dior, a couple of Versace dresses pilfered from the 90s, and this twenty-year-old Bob Mackie number. In fact, the vast majority of Miley’s current wardrobe seems to predate even Twitter itself – bar a couple of pieces designed by Alessandro Michele, because she still has contracts to fulfil. The musician’s latest incarnation as a bronzed-up LA babe is about more than just Y2K cosplay and Paris Hilton cameos, though. Since the late 2010s, celebrity stylists have approached archival fashion as a device to flaunt their fashion knowledge and align their clients with the pop cultural cachet of Britney and Beyoncé. Star power will always secure new season fashion, but it takes a different kind of capital to pluck from a designer’s back catalogue.

It’s what transformed Addison Rae into Addison Slae, and keeps Kim K in currency (see the AW97 Atelier Versace gown she wore on Christmas Eve). Beyond culture’s continued fascination with the 00s, the sheer number of trend revivals today means Y2K fashion has become completely normalised as an aesthetic standard for celebrities. Like a colour wheel spinning into brown, the whole thing is part of a mad, postmodern megamix where disparate styles from different eras are levelled against each other. Clock Miley’s underdyed 80s perm, for example. It’s this which makes her reinvention feels so contemporary: it might not be thrusting a completely new, never-before-seen look unto audiences but it’s reflective of fashion’s flat circle – one where BOY London caps are revived on Instagram alongside frazzled English women on TikTok.

New Miley is the handiwork of Bradley Kenneth, who’s been styling the singer since she was twerking on inflatable hot dogs. She’s since abandoned the performative tongue-wagging of Bangerz but Miley’s just as mischievous as she’s always been – even despite the mournful, Nashville-adjacent melodies on Plastic Hearts. If she once wore questionable dreadlocks and metallic harnesses to telegraph her untameable youth, then Miley’s lean into archival fashion rides on the realisation that she is no longer a teen tearaway but an extremely rich, bisexual divorcée and it’s high time she started dressing like one. Of course she’s going to wear little black dresses with g-string cut outs designed by Tom Ford in the 00s. Her fashion should scream “I own a sprawling condo in Malibu and my godmother is Dolly Parton.” Still fun, still frivolous, but with a little more savoir faire.

Or perhaps Miley’s just realised that the only thing more crazzzzy than slipping into a rhinestoned, 4:20 blaze-up bodysuit is slipping into a look that nobody else can even get their hands on.