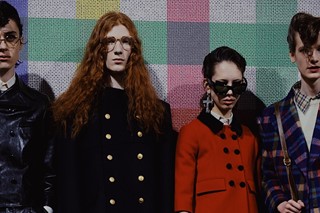 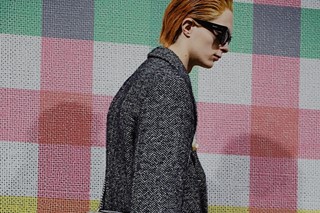 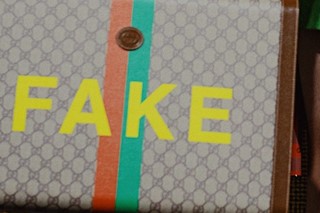 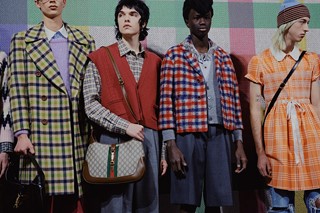 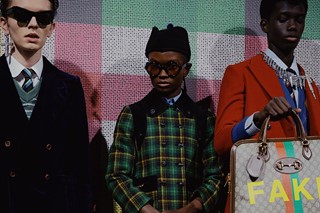 2020 marks five years since Alessandro Michele took the helm at Gucci – and what a five years it’s been, with models carrying baby dragons and effigies of their own heads for AW18, straitjacketed models making their way around the runway for SS20, and even Jane Birkin making an appearance at its SS19 show.

Today, we’re in Milan to find out what the iconoclastic creative has dreamt up for AW20, as part of his first standalone menswear show since 2016. Here’s everything you need to know live from the throw (third row, duh!)

THE INVITE WAS PRETTY NOSTALGIC

With those invited receiving a series of vintage greetings cards and postcards. Every single one was different, with decoupaged birds, old-fashioned flowers, and a custom stamp all featuring – Alessandro has clearly had the Pritt-Stick out this season.

THE SET WAS V IMPRESSIVE (OBVS)

The show took place at the Palazzo delle Scintille (where J.Lo took her star turn for Versace last season FYI). Guests walked into a sand-strewn arena where, at the centre, an enormous pendulum swung ominously from side-to-side. Between this and Virgil Abloh’s Louis Vuitton invite, the ticking hands of time are seemingly on fashion’s mind for AW20.

With former Dazed cover star Marilyn Manson’s version of The Eurythmics’ “Sweet Dreams” and André Rieu’s “Second Waltz” on the line-up. Add to this the baby doll dresses and slubby cardigans that featured throughout the collection, this season Gucci eschewed it’s usual whimsy and slipped into something that felt a lot more grunge-y.

THERE WERE TWO NEW COLLABS – WITH RICHARD HELL AND LIBERTY

THE COLLECTION LAUGHED IN THE FACE OF TOXIC MASCULINITY

For AW20, Michele presented an array of babydoll dresses, which were paired with ripped denim jeans and grey tailored trousers, along with schoolboy looks in the form of a bright green short-suit paired with a miniature trunk bag. With fluffy blue and pink jumpers, crop tops, and some pretty flamboyant suits also featuring, Michele explained that he was this season thinking of a kind, caring 'baby-man' who had no time for toxic masculinity this season.

THE FRONT ROW WAS PRETTY MAJOR

A who’s who of who’s cool was the general theme of Gucci’s frow. With some seasoned favourites in the form of Jared Leto, Michele’s first standalone menswear show also drew the likes of Anderson .Paak, Tyler, the Creator and Earl Cave. There was also Little Simz, Kai, Kelvin Harrison, and Mark Ronson, Yves Tumor, Richard Hell, and many, many more. Suffice to say: major.