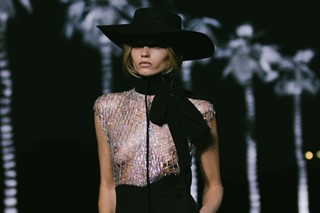 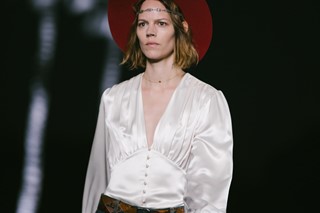 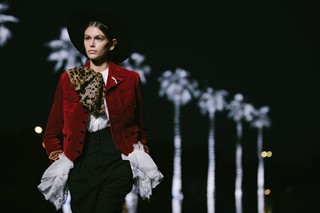 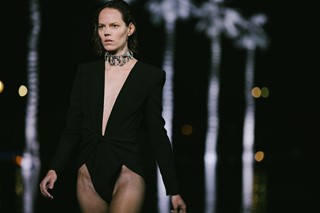 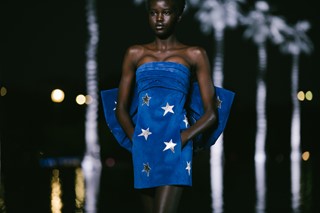 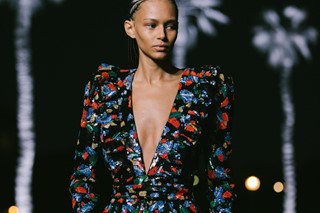 It’s day two of Paris Fashion Week, and on the agenda tonight is Saint Laurent. What does Anthony Vaccarello have in store for us for SS19? Read on to find out everything you need to know...

THE SHOW WAS ON THE TOP OF THE TROCADERO FOUNTAIN

As with previous shows, tonight’s presentation took place under the shadow of the Eiffel Tower. Lining the black, water-filled catwalk was a row of faux, glowing white palm trees. As the show started, the Tower started sparkling in what was one of the most Parisian moments ever.

THE FROW WAS PRETTY MAJOR

THE MODELS WALKED ON WATER

Lo, a fashion miracle! And no one fell over! As the music began, models hit the runway in snakeskin boots and XXL platform shoes, strutting the length of it like it was no big deal (we were triggered though – this is not something we’d be attempting if we had a brand new pair of Saint Laurent heels on TBH).

… and very Saint Laurent. Models including Anja Rubik and Freja Beha took to the runway in tiny snakeskin shorts, tailored velvet military jackets, silk blouses unbuttoned to the waist, and thigh-high leather boots. Also on the line-up were tiny beaded mini dresses, floor-sweeping star-embellished gowns. Looks were finished with wide-brimmed hats and jewelled headbands that wouldn’t have looked out of place at a psych-rock concert.

IF YOU THOUGHT THE ONE-BOOB LOOK WAS RISQUÉ...

This season, Vaccarello sent out a look that included not one nipple pastie (as per Binx Walton’s outfit in his debut show) but two – one beaded dress ended abruptly under the model’s boobs. Casual.

ABBEY LEE KERSHAW MADE A RETURN TO THE RUNWAY

The Aussie model hasn’t sashayed down the catwalk since 2014, but made a special appearance tonight at Vaccarello’s SS19 show. Appearing twice, her first look was a lattice top Swarovski-d to within an inch of its life, paired with black trousers and snakeskin boots. Next came the poolside glamour section of the show, in whcih Kershaw wore a glittering swimsuit accessorised with wet hair. A campaign next, maybe?

JUST WHEN YOU THOUGHT IT WAS OVER

…out struts Anja Rubik in a 80s-esque couture leotard, followed by a stream of models including Fran Summers and Sora Choi in long, black see-through dresses and black swimsuits. Not a poolside goth? Next up, came a line up of leopard print lewks, before some more black sparkly numbers. Finally, Julia Nobis closed the show in a tuxedo-like cape, with a sheer shirt underneath. Yes, it dragged along the water. No, she didn’t give a fuck.