With a little help from mascot Abigail Pickle, the founder’s hairless dog 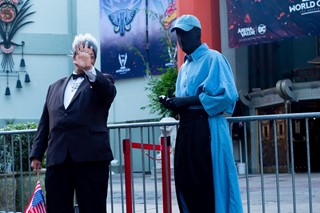 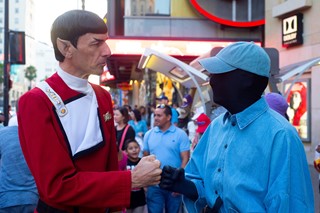 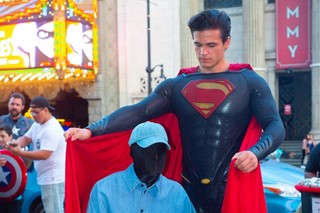 Since founding the LA-based label in 2011, the anonymous mastermind behind 69 has been committed to embodying the changes the fashion industry needs most, with its genderless, locally-produced clothes based on principles of radical inclusion and sustainability. Known for its oversized, hybrid garments made almost entirely from denim – a fabric which lead designer ‘A’ embraced because it’s utilitarian, durable and universally appealing – 69’s contribution to moving fashion forward has now been recognised, as a new exhibition opens at MOCA Los Angeles this weekend.

“I do feel like the underdog in this industry,” explains A. “It’s so validating to know that of all the people appreciating what we’re doing, an actual museum did.” The retrospective show, entitled Déjà Vu, will encompass 69’s utopic vision, thrusting visitors into an alternate universe where the boundaries of identity dissolve, expectations are shattered, and humour reigns supreme. On show will be 30 full looks, taken from the brand’s seven year-long history, which demonstrate its evolution. Also featured is the label’s mascot, hairless dog Abigail Pickle, who, according to A, actually helped select some of the items in the show: “I usually display selections before Abigail when in doubt,” they explain.

Elsewhere, 69’s more radical pieces are on show, too. Its shaggy ‘Fringe Masks’ and draped garments with removable panels like ‘Tit Void’ will be presented in a manner which invites viewers to recognise their sculptural qualities, and appreciate them beyond the realm of garment. Rounding things off are a series of irreverent and inventive videos and photographs that blur the line between campaign, promotional material, and artwork. Placing 69’s output in a museum context highlights the greater meaning behind each and every aesthetic decision, proving fashion’s capacity to provoke thought and promote social critique. “I’ve always wanted more for this brand, the clothing is just a foundation,” says A. I have so many ideas it’s hard for me to even fathom how I’ll even be able to execute them in the future.”

“I think people are intimidated by big clothes and weird ads, but it’s all in good fun. We just want to promote playfulness and imagination, which are things I think a lot of people lose touch with” – A

69’s propensity for pushing boundaries affects every element of the brand’s output, and humour, for A, is key. The unfortunate tendency for the joke to go over some peoples’ heads is perhaps what has helped to earn it a reputation as a cult brand. “That’s the antithesis of what 69 is meant to be, though,” says A, in that it implies exclusivity. “I think people are intimidated by big clothes and weird ads, but it’s all in good fun. We just want to promote playfulness and imagination, which are things I think a lot of people lose touch with.”

The sentiment that 69 is for everyone is echoed in its perpetually diverse casting, which includes a wide array of ages, sizes, colours, and gender identities. And beyond its sexual connotations, the brand name and logo is a reference to A’s astrological sign, Cancer – otherwise known as the ‘mother’ of the Zodiac. Like the home-loving, nurturing, and empathetic Cancer, A and 69’s mission is to dress its wearers in (usually oversized) garments that are as cosy and comforting as they are liberating. “I want everyone to feel modest and naked simultaneously,” says A. The brand’s unisex styles have managed to prove that comfortable and cool are not mutually exclusive, and maintain an aura of the avant-garde despite embracing the practical. “I want 69 to be a catalyst for revolution”, the designer concludes.