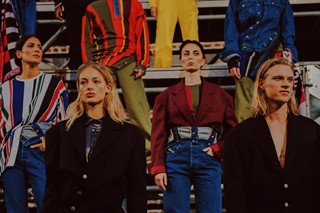 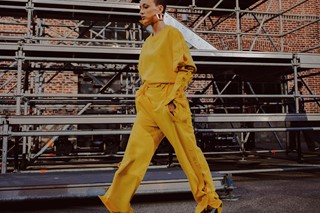 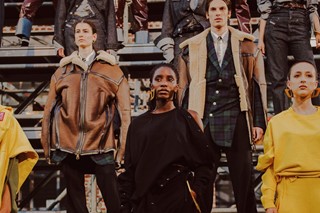 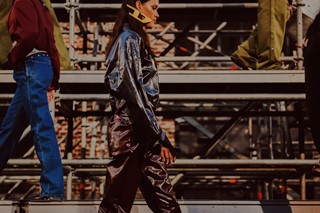 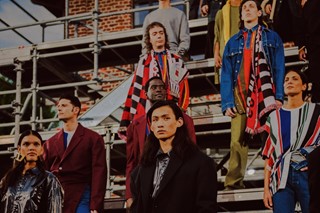 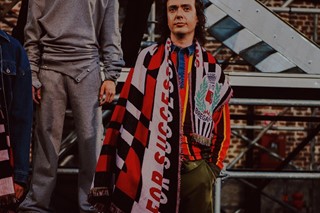 At the end of last year, Nicola Formichetti announced he would be stepping down as Diesel’s artistic director, after four years at the label. Since then, company president Renzo Rosso launched Diesel Red Tag, inviting contemporary designers to collaborate and reinvent the codes of the house.

Following Hood By Air’s Shayne Oliver dropping the debut collaboration in January, today Y/Project’s Glenn Martens presented his take on the Diesel codes at Milan fashion week. Launching in line with the label’s 40th anniversary, Rosso has been a fan of the Belgian designer for a while. Martens counts himself as a longtime fan too: “I’m part of the generation who grew up with Diesel,” he tells us.

Bringing the conceptual thinking that he has become known for at Y/Project, Martens’ Red Tag collection reworks the pieces Diesel is most famous for. “The whole idea was to see Diesel through my eyes. Each piece is based on a classic Diesel item: the basic denims, track suits, colourful t-shirts etc.,” Martens explains. Fans of his designs need not worry though. “The rest is mine,” he says.

Taking inspiration from Diesel’s “go with the flaw” campaign from last year, each of the pieces have something slightly off-kilter about them. Think jackets with buttons that twist around the body, joggers with shrunken waistbands, and extra-long jeans rolled up so they fit. “The waists are basically fit for a newborn while the rest of the fit is oversized,” the designer explains. “The sides, the front and the back are buttoned up so you need to keep your piece opened somehow to fit in the jackets. You need to embrace the mistake and own it. Make it your own.”

For the collection’s lookbook, Martens enlisted Dutch artist and street photographer Hans Eijkelboom to shoot it. Known for his book People of the Twenty-First Century – which sees him shooting groups of similarly dressed people on streets around the world – this is the first time Eijkelboom has collaborated with a fashion brand. “Hans’ work connects many different types of people through one key item,” Martens says. “This is exactly core to Diesel’s brand identity. They have always been that brand that talks to everybody.”

Similarly, for the presentation, Eijkelboom provided more inspiration with the set created as an homage to him. Standing on a tiered grid to represent the layout of the artist’s book, six groups of models (each four-strong) wore one of the key items of the collection. Here, the message of wearability for all was stronger than ever explains Martens. “We’re underlining that these pieces that are in theory “unwearable” are worn by the group of 24 models and therefore totally easy to wear.”