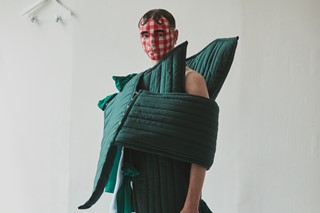 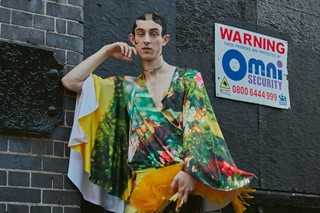 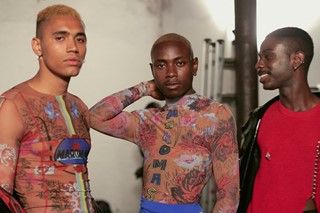 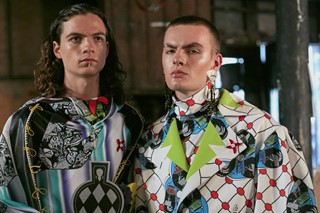 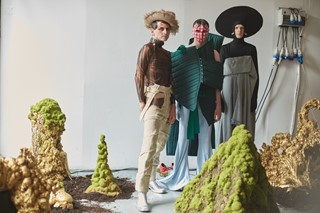 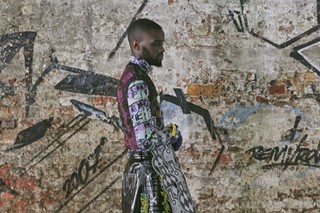 Another season of graduate shows are well underway, with Central Saint Martins, Westminster, and London College of Fashion’s womenswear presentations down, and the Royal College of Art’s still to go. Taking place last Friday was LCF’s menswear show, the organisation of which the students took into their own hands.

Calling themselves Burn The Man and forming a collective of over 30 students, the idea was born of a desire to do things on their own terms and showcase their work their own way. And unlike some final year catwalk shows, where only a handful of graduates are asked to participate, every student was given the chance to get involved. “In making the ‘selection’ process open, we were able to collaboratively use our resources and skills regardless of income, race, or gender. The only other requirement was that those that decided to join knew that there would be a high level of work, effort, and time involved,” explains Thomas Harvey, one of the designers among the collective.

At the end of the first day of London Fashion Week Men’s, the group took over an old ceramics factory in East London, where friends, family, and members of the press assembled to see the young creatives present the results of four years of hard work. By 7pm, still half an hour before the runway show began, a lengthy queue had formed on Shoreditch High Street as the venue hit capacity and guests spilt out onto the pavement. Inside was just as chaotic and full of energy, and a sense of excitement was palpable throughout the building – exactly the way any good grad show should be.

Upstairs, students’ work was displayed across sections of the stark, industrial space. Among them was Connor J O’Brien’s collection, Embryonic Microcosm, which featured a fantastical line-up of looks inspired by Studio 54, The Wizard of Oz, Greer Lankton, and Andy Warhol, with subtle nods to Jean Paul Gaultier and Walter Van Beirendonck. “I wanted to create a genderless collection for a space in which, instead of being a man or a woman, you can be a...flower, or whatever,” O’Brian explained.

Elsewhere, Granny Still Loves a bit of Acid House saw student Jubel contrast bold, acidic prints against soft, smocked shapes and delicate silk scarves, which were tied around the models heads Queen Elizabeth the II style. Elsewhere, The House of JuJu’s collection drew inspiration from the uproar caused by the women’s march that took place in Versailles in 1789 and 1960s garage rock, which manifested itself in sculpted silhouettes, soft tailoring, and some stand-out oversized trench coats crafted from vast swathes of fabric.

And then the catwalk show. First on the runway were Taylor Guerras’ Invisible People, wearing a series of exaggerated, sweeping overcoats and wide, high-waisted trousers, as part of a collection that explored identity. “I looked at how we use clothes as a way to segregate ourselves from society, and blend into the world,” he explained post show. After Guerras came Yang Ming Quian and Yue Zhou’s procession of talisman-esque, sculptural pieces that covered the models’ faces, seemingly made from thick, industrial material not dissimilar to groundsheets in a palette of bold primary colours.

Rosa Avilez worked with a cooperative in Honduras to create the (entirely ethical) fabric for her collection, which featured soft tailoring and sportswear-style silhouettes and nodded in the direction of her father’s cultural background, while Callum Pidgeon’s Young Lads to Young Dads channelled 90s nostalgia into a series of boxy leather motorcycle jackets, sports kits, and wide, stonewashed denim trousers, inspired by the beauty of adolescence and young men entering the realm of parenthood.

Finally, closing the show was Maromas – a joint effort from Thomas Harvey and Mauro Pitteri. Featuring finely woven logo-emblazoned tops paired with provocatively-cut tailored shorts, sheer, oversized shirts, pintucked formal coats, and a stand-out floral two-piece suit made from silk jacquard fabric, the collection tapped into the designers’ Caribbean and Argentinian heritages, and the duality that lies within the Jamaican dancehall scene particularly. “Being homosexual in Jamaica is seen as a negative, which is quite amusing when you look at how flamboyant heterosexual men are in their fashion and dance styles – their take on style is fully formed and beautiful, but to actually be gay is rejected. We wanted to explore that juxtaposition,” Harvey explained post-show.