The London school’s newest crop of graduates presented their collections 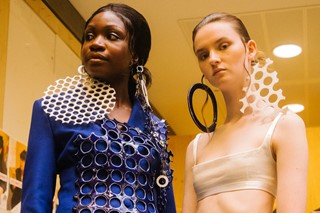 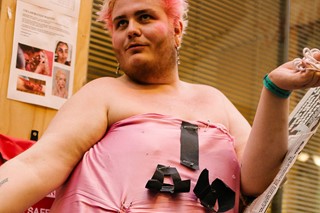 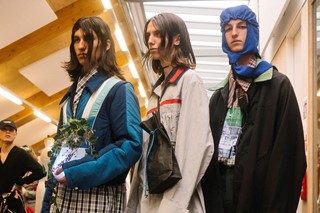 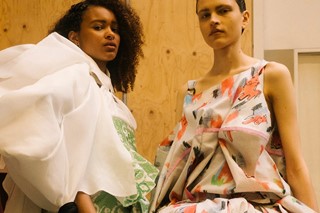 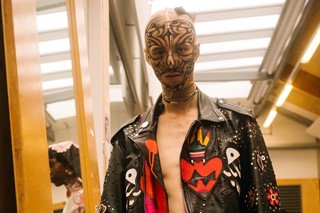 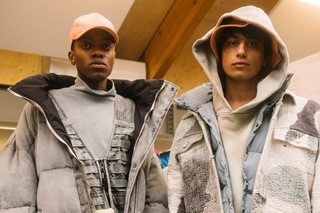 With the end of the school year fast-approaching, so begins this year’s round of fashion graduate shows. Following on from Central Saint Martins’ MA show – held during the menswear shows in January – the college’s BA students presented their efforts last night.

With students coming from far and wide, there was an eclectic mix of inspirations, with everything from 90s grunge boys, elves, fake politicians, and giant walking sculptures taking to the runway. Elsewhere, there were 80s-esque kids who wouldn’t look out of place on Stranger Things courtesy of Robert Bell. Patrick McDowell went down a sustainability route, presenting a gang of sexy mountain hikers, while Kira Massara’s beautiful ceramic creations jangled like wind chimes as the models moved.

Elsewhere, special mentions go out to the runners-up of the L’Oréal Professionnel Young Talent Award: Simon Valer Dacsef, whose collection featured glamorous gowns reimagined in sculptural shapes, René Scheibenbauer for his quiet and minimal nomads, and Matilda Söderberg, whose models looked like a cross between politicians and Teletubbies.

Find out who won and some more of our highlights from the show below.

Canadian-born Paolina Russo found fame before last night’s show, when Solange wore one of her sports-inspired corsets on the cover of the spring/summer 2018 issue of Dazed. The rest of the collection followed the same theme, which she described as “Post-apocalyptic sport-punk, but sexy.” Models took to the runway wielding hockey sticks, dressed in barely-there dresses and skirts created out of deconstructed footballs and sports equipment stitched together. Elsewhere, a holographic jumpsuit revealed a sports team number on the back as the model sashayed down the catwalk. With Russo taking home the L’Oréal Professionnel Young Talent Award – following in the footsteps of last year’s winner and Dazed 100 designer Goom Heo – keep an eye out for what she does next.

It’s possible you’ll already know Harry from his Instagram account @harrie.bradshaw, where he is often found prancing around London in a spaghetti strap silk slip he’s designed. Keeping with tradition, Freegard opened his show in a similar look, wheeling down the catwalk on a scooter with a skeleton dragging behind him. Why? “Harry is dead” his headpiece declared. The designer had decided to plan his own funeral – but fabulously, of course. Aside from his own dress, the rest of the collection was in line with the kind of debauchery we’ve come to expect, with one model skipping down the catwalks wearing a paper garment bag (complete with hanger), and others wearing fake, hand-drawn quilted styles. Elsewhere, a model carried a memorial plate with the his face plastered on it ‘In Loving Memory’. Freegard might be ‘dead’, but the audience were all living for his fun-eral.

Making knitwear fabulous must have been the motive behind Gui Rosa’s collection, because that’s exactly what he delivered. With the starting point his grandmother’s wardrobe, Rosa wanted to reinvent the tweed suits that he found, and as is synonymous with tweed, the glamour of 90s Chanel that comes with it too. “It became a mash-up of the glamour of demi-couture intertwined with a crafty element that is essential to my childhood growing up in Portugal,” the designer explains. Bringing high energy to the middle of the show, some of the models accessorised their looks with giant bananas and aubergines – with others throwing out knitted groceries, inspired by traditional Portuguese kitchen plates. “It’s a celebration of these women that live a glamorous life indoors, whether through magazines or television,” Rosa says.

You might remember Pierre-Louis Auvray for his Instagram aliens, but there weren’t any extraterrestrials in sight for his collection. Instead, it looked like it had come straight from the wrestling ring, with inspiration drawn from images of medieval fighters in tight clothing (“the proportions were so ridiculous and fun,” he says). Auvray’s interpretation consisted of latex bodysuits – stuffed to mimic muscles – layered with bikinis and often covered in fake tattoos. “It’s about feeling angry all the time, that’s why the designs look a bit aggressive,” he explains. Bringing yet more strange, shoes had horns protruding from the front of them and one model carried a severed head. Given the designer claimed Gucci plagiarised his aesthetic only last year, we’re guessing the move was a bold and characteristically provocative nod in the direction of the Italian label.

Glamourous gimps. The two best (and perhaps only) words to describe Vincent Lapp’s graduate offering. With not an inch of skin on show, his gimps weren’t of the typical latex variety, though – instead, they were wrapped in luxurious, ladylike fabrics including velvet, and satin. “My aesthetic is very couture,” Lapp tells us. “It combines femininity, romanticism (in a literary aspect) with a bit of burlesque.” More than just a hark back to the old days of glamour, the collection was a statement against religious radicalism and fanaticism, inspired by Le ciel attendra, a French film about women who become attracted to radical Islam. This manifested in the pièce de résistance of the collection: a royal blue velvet number, completed with a matching frilly hat. Classy and nasty all at the same time.