Inspired by the London riots, RCA grad Charlotte-Maëva Perret pillages from the runways to create work that questions the relationship between branding and identity 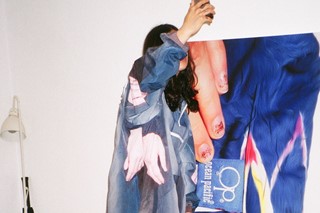 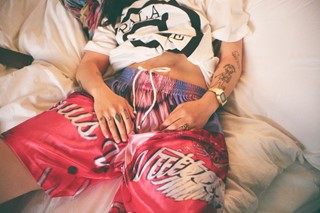 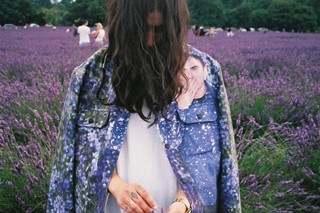 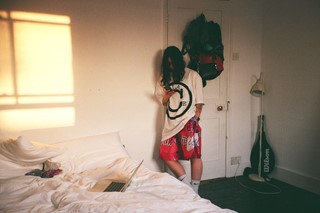 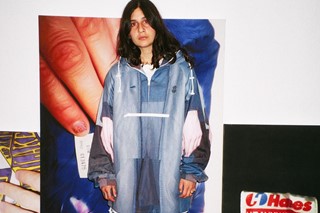 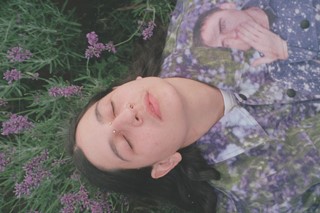 The aesthetics of bootlegging have never been more popular. Gosha Rubchinskiy appropriated the iconic logos of sportswear giants, Gucci showed a branded tee inspired by fashion forgery and even Team Kanye West scooped up a series of Asspizza’s bootleg tees to sell in his NY Pablo pop-up. The lines between real and fake have been irrevocably blurred, and it’s this disruption which fascinates recent RCA graduate Charlotte-Maëva Perret.

More specifically, Perret’s ‘Riot Collection’ mused on the significance of gang members pillaging apparel stores throughout the London riots – she began to question the relationship between logos and identity as well as the use of clothing as an invisible language. Perret mimicked this theft of branded goods by trawling the Internet for iconic fashion imagery and printing it onto her own collection. She describes the results through a series of hashtags: #datalifting, #postindustrialbrandscape and #postlooting are just a few examples. Here, Perret talks about the effects of technology on fashion, the visual language of street gangs and the idea of luxury brands as modern currency.

Can you tell us about your background in fashion?

Charlotte-Maëva Perret: I didn’t go to fashion school. I have a BA in Graphic Design and Printmaking as well as an MA in Visual Communication. Although some of my work could be defined as fine art, I look at the world through the lens of design – that course gave me an invaluable set of tools to read images, objects or language systems which has helped me to write and make my own. The language of fashion particularly inspires me because it appropriates and celebrates everything unapologetically. It rewrites itself and attempts to predict what ‘the future of’ everything might look like; it’s Autumn, Winter, Spring, Summer at 300mph.

What were the most important lessons you learned at RCA?

Charlotte-Maëva Perret: I learned to commit and believe in my ideas and my practice. There isn’t any one rulebook – everyone has their own way. I learned and achieved the most through working with and talking to other students; the people there were super hard-working, passionate and talented in many ways.

How did you come up with the concept of fashion piracy?

Charlotte-Maëva Perret: I’m interested in languages of resistance and how to innovate in the way we express them visually. I read In Defence of the Poor Image by Hito Steyerl, she talks about a world divided into image qualities; it’s a world divided between the Proleteriat (low-definition) and the Elite (high-definition). So one is pixelated, downloaded and shared indefinitely whereas the other is expensive to access, rare and highly crafted. The essay made me question the way we produce and consume images today.

How did the London riots inspire the collection?

Charlotte-Maëva Perret: After the London riots the UK government released a new set of policies which trained police officers to decipher the dress codes, signs and languages of gang makers. Not only did it improve ways to identify and intercept gang culture, it also meant that gang members were forced to up their fashion game to remain hidden. This discovery inspired me to look into invisible languages; I started to think about the riots as part of a brand strategy.

Shops that were looted suddenly increased in popularity amongst their niche market. It occurred to me that not only was there an evident desire to own branded products in their material form, it was also a desire to display and identify what a certain brand meant to them. There seemed to be a war to capture these modern icons just like war flags; it was about trying to appropriate brand values and change their meaning as an act of resistance.

“The language of fashion  inspires me because it appropriates and celebrates everything unapologetically. It rewrites itself and attempts to predict what ‘the future of’ everything might look like; it’s Autumn, Winter, Spring, Summer at 300mph” – Charlotte-Maëva Perret

How did you decide which collections to ‘loot’?

Charlotte-Maëva Perret: There were two things that influenced my decision. The first was a desire to avoid looting catwalk images from small and young fashion houses. It’s not necessarily about being ethical or political, I just like the sound of iconic brands like Gucci, Cerruti, Louis Vuitton, Chanel, Dior; they map our ‘brandscapes’ and appear in rap punchlines. They have become modern currency.

The second thing I considered was the season; the date at which the image was taken will increase the value of the garment. When SS17 catwalks take place the products you see aren’t yet in production, meaning that wearing a reproduction of its image six months beforehand is extremely exclusive.

Do you have a favourite piece?

Charlotte-Maëva Perret: I think the ‘Too Fast For Raf’ jacket is my favourite – it communicates the idea behind the collection quite concisely. I originally produced a collection of tracksuits for my final show in June 2015 which featured notorious collections from Givenchy, Moschino and Raf Simons. Later that year Raf Simons resigned from Dior – I remember reading how he couldn’t cope with the speed at which the fashion industry was delivering. The image of him standing in front of a flower wall dramatically kissing goodbye to Dior and the world of fashion was a poetic moment to materialise into a garment. I am fascinated by objects that allow you to travel in time, like band tees and memorabilia. I hope I can look at this jacket in the future and reflect on a time when the industry was willing to change... Or not.

“I am fascinated by objects that allow you to travel in time, like band tees and memorabilia. I hope I can look at (the Raf Simons) jacket in the future and reflect on a time when the industry was willing to change...” – Charlotte-Maëva Perret

How have people reacted to the collection?

Charlotte-Maëva Perret: The reactions are mainly positive with some negative hints, which is great in terms of helping me to improve and remain critical. Academics often ask whether the collection should exist as an art project in a gallery context or whether it should be worn, produced in large quantities, branded and sold. Those with a fashion background usually ask questions related to copyrights and the longevity of the project, but they often love the originality of the concept and challenge me to work on the silhouettes and the printing quality. I like the idea of the collection bridging these gaps between different audiences, insitutions and corporations; between art and fashion, between amateurs and craftsmen.

Do you think new technologies are beneficial to the fashion industry?

Charlotte-Maëva Perret: The production of the collection is made possible by the democratisation of on-demand printing online services, fast data dissemination and our immediate access to tonnes of images from our devices and the internet.

I feel strongly about technology, it has made it easier for our generation to take control of the means of production. It feels very empowering. Althought I have great interest and respect in what happens to the heritage of craftmanship, I am also fearful of cases where authenticity is confused with a nostalgic filter or becomes an aesthetic. I think that everything is craft, with or without technology, it is only the content that has changed. I am more concerned with trying to communicate something, trying to innovate in ways of making and methodologies that reflect the world I live in.