Featuring the Dazed 100 star alongside other talented young creatives, the campaign marks another chapter in the creative relationship between Miuccia Prada and Steven Meisel 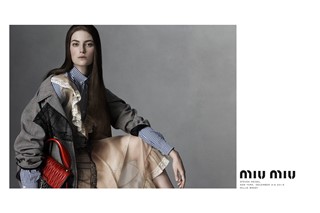 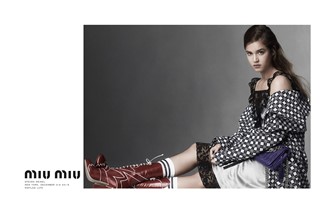 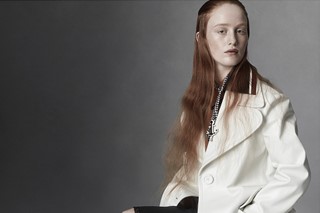 Miuccia Prada is a woman renowned for her intelligent casting choices – it’s commonplace for her seasonal ‘Prada exclusives’ become some of the most-talked about names in fashion. So it’s no surprise that, when casting Miu Miu’s SS16 campaign she turned to Dazed 100 star India Salvör Menuez. A creative polymath in her own right, Menuez founded the ‘Luck You’ collective at age 15 and has since gone on to paint, sculpt, write, costume design and act.

She can now add ‘face of Miu Miu’ to her list of accolades, starring alongside fellow actresses Julia Garner, Milly Brady and Matilda Lutz in a campaign lensed by the iconic Steven Meisel.The tightly-cropped images showcase a collection which juxtapose gauzy lingerie with strict tweed pencil skirts, all of which are accessorised with colourful fur stoles and hanging raccoon tail charms. The campaign also marks another chapter in the relationship between Miu Miu and Meisel, which last season spawned one of the year’s greatest campaigns in the form of ‘Subjective Reality’.