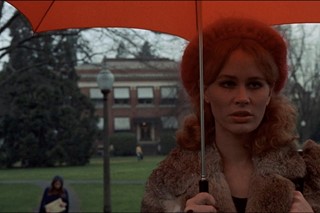 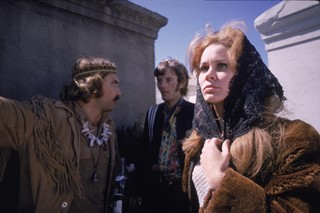 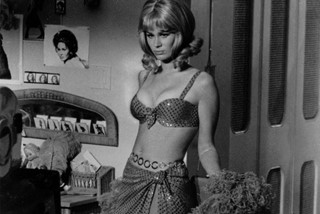 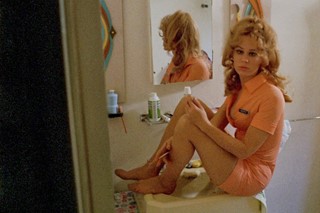 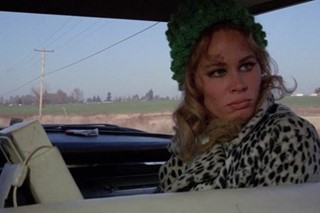 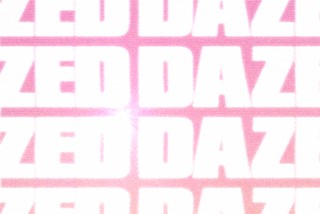 If you don’t know Karen Black’s face, you can’t have seen any of her over a hundred movies. Though she often found herself in supporting roles, her electrifying, off-kilter presence is hard to shake off in the cult films of New Hollywood where she made her name – films like Easy Rider (1970), The Day of the Locust (1975) and Five Easy Pieces  (1970), which is getting a restored re-release by Criterion this week.

Facing off against the lost generation machismo of leading men like Jack Nicholson and Dennis Hopper, Black carved an authentic female presence on screen that drew upon an entire century of outsider women: whether that’s a New Orleans sex worker on a bad acid trip, a doomed social climber in The Great Gatsby (1974), or even her quiet turn as a post-op trans woman in Come Back to the Five and Dime (1982).

Her signature tumbling curls may have been a different colour in every film, but her ski slope nose and crossed eyes made her an icon of 1970s unconventional babedom (see also: Sissy Spacek, Shelley Duvall). We chart the reasons why her on-screen fashion moments, more than a product of their era, represent a powerful statement on femininity that refuses to smooth out its rough edges.

SHE SHOWED THE REALISTIC SIDE OF 70S STYLE

As Jack Nicholson’s ill-treated girlfriend Rayette, Black added her signature wonky charm to Five Easy Pieces, Bob Rafelson’s chronicle of all-American alienation in the early 1970s. Playing Rayette with a pitch-perfect mix of frank sexuality and damaged vulnerability, her portrayal is an authentic insight into blue-collar American life in a sexist world. It’s an authenticity present in the clothes – after all, you can’t dress like a hippy when you’re on shift as a waitress. Her leopard print coat, ruffled blouse, and neat headgear are all indicative of the strength that can be drawn from maintaining glamour with limited resources. Speaking of the character in 1970, Black said, “There are many things she does not know, but that's cool; she doesn't intrude on anybody else's trip. And she's going to survive."

For her breakthrough role, Black played one of two sex workers who join Peter Fonda and Dennis Hopper for a night of psychedelia during the New Orleans Mardi Gras. As the group ride out a bad acid trip among the ramshackle surrounds of St. Louis graveyard, audiences get an early taste for Black’s ability to depict women freaking the hell out. Black wears a silver mini dress and fishnet stockings, grabbing a fur coat when they leave the brothel – a look straight out of the American dream of the 60s, thrown into the increasing anxiety of the American nightmare of the 70s.

“Her portrayal is an authentic insight into blue-collar American life in a sexist world. It’s an authenticity present in the clothes – after all, you can’t dress like a hippy when you’re on shift as a waitress”

HER UNHINGED BOMBSHELLS WERE NOT PERIOD DRAMA FODDER

Black’s beautiful freaks weren’t always stuck in the same decade. Her pin-up appeal lent itself to seductress roles of the 20s and 30s. Pre-Baz, she plays doomed Myrtle Wilson in the 1974 adaptation of F. Scott Fitzgerald’s The Great Gatsby; in 1975, she is trashy wannabe actress Faye Greener in The Day of the Locust, a cynical and gothic depiction of Depression-era Hollywood. Translating the desperate glamour of her 1970s characters into an earlier period, the vulgar, out-of-control aspects of her women are tangible in their style: a more-is-more approach seen in Myrtle’s orange feather-trimmed gown and matching headband – you can see her sweating – or Faye’s undone silk kimonos and pyjamas that aim to seduce.

HER KILLER STYLE CREATED A GENRE ALL ON ITS OWN

While Black would later express dismay that her name came to be associated so much with horror, for many her reign as the ultimate genre queen was her finest moment. It began with her casting in Trilogy of Terror (1975), in which she played three female leads in a one-woman tour-de-force of scheming, screaming and voodoo magic. Lending sexiness and strangeness to every role she played, she inspired legions of good-girls-gone-bad in cult horrors to come. Kembra Pfahler’s cult glam-punk band is even named in homage to Black’s unique brand of kick-ass horror queen – The Voluptuous Horror of Karen Black.

SHE WAS THE LAST EVER HITCHCOCK HEROINE

One of Hitchcock’s most underrated leading ladies, Black played an elegant kidnapper and jewel thief in his 53rd and final film, Family Plot. A post-modern crime movie about the search for a missing heir, Black plays alongside William Devane as a pair of criminal masterminds behind the entire affair. Unrecognisable in the role, we first see her in blonde wig, large black sunglasses, trench coat and panama hat – a cool-as-ice criminal ingénue who demands ransoms without needing to say a word.