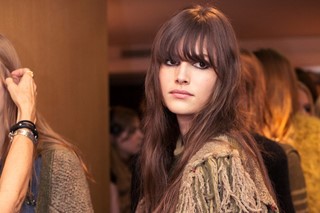 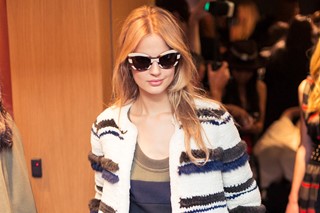 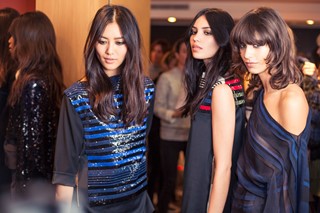 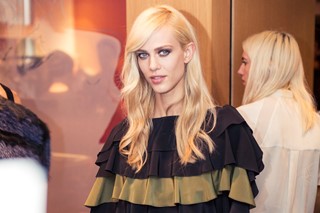 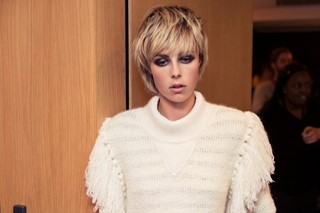 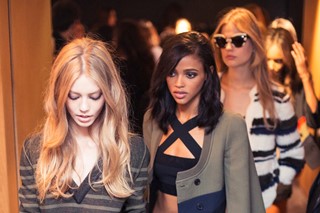 Left bank je-ne-sais-quos hotties inspired by an original Sonia Rykiel quote which literally translates to say "beauty will always be striped." Newly installed creative director Julie de Libran, who comes with a heavy hitting C.V. that includes Prada and Louis Vuitton, elevated the stripe so that it appeared on everything from the sleeves of nubby tweed jacket to the lining of a loden green tasselled cape to a sheer white tunic dress with a matching bikini underneath. Kendall Jenner in a lascivious ensemble of a bralet top and slashed and sheer tiered skirt was the real head turner that told us de Libran's tenure at the house will be an eventful one.

Within the intimate setting of Sonia Rykiel's Boulevard Saint Germain store, with waiters from Café Flore across the road serving drinks and nibbles, it felt more like a soirée than a show. A va-va-voom cast that included Georgia May Jagger, a flame-haired Lizzy Jagger and Gigi Hadid, sashayed around the shop to a Donna Summer medley of “Love to Love You Baby” and “Bad Girls”, in an array of jumpsuits - a key silhouette for de Libran's debut – so that she could "stride purposefully forward, revealing who is really wearing the trousers."

It's that much more personal when the creative director addresses you personally and just as Nicolas Ghesquiere's type written note touched us at his debut at Louis Vuitton last season, so it is that de Libran also also wrote us a note, talking about her memories of her mother wearing Sonia Rykiel and thanking the Rykiel family for inviting her to continue the work of the house. "Like many French women, who were born in the 1970s, I have happy childhood memories of my mother wearing Sonia Rykiel. I've had a life-long connection to the label, and arriving here has felt curiously like a homecoming."

The soundtrack to Sonia Rykiel SS15: