From black grease paint to milky white lenses, we round up the season’s most striking beauty looks 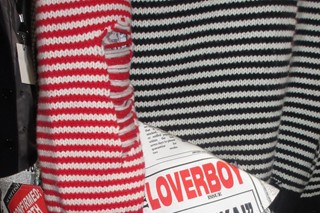 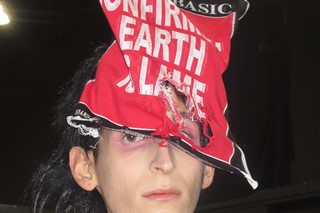 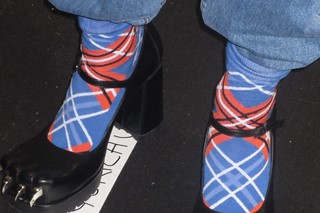 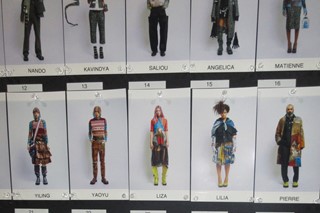 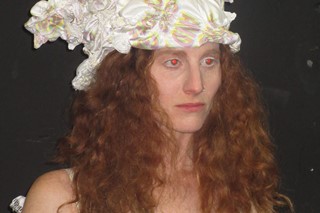 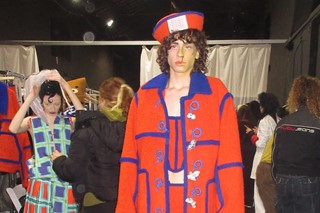 It’s been a while since we’ve seen a really great duck’s arse. The hairstyle, of course. The look once popular with teddy boys, greasers and rock ‘n rollers everywhere fell out of favour around the 70s and now sadly only pops up every now and then, mostly on Alex Turner. But lately, thanks to Baz Luhrmann’s biopic and the upcoming Sofia Coppola’s Priscilla, Elvis has been back in the cultural consciousness, which seems to be sparking a revival of his famous pompadour style – at least on the Charles Jeffrey Loverboy catwalk.

Showing in Milan for the first time after moving on from London, the Charles Jeffrey Loverboy collection this season was set in “Ajuka” an imagined floating city populated by bedraggled labourers (in protective gear and found jewellery), “posers” (in sleek tailoring, outsized ruffles, and claw-footed brogues) and “snakes” (AKA gossip-mongers in tailored tweed and scraps of old newspaper).

Courtesy of Claire Moore and Terry Barber, respectively, the hair and make-up for the show was used to further bring to life these characters. The labourers walked with soot-covered faces, or as Barber called it “coal mine contour”, which he said was inspired by his Welsh roots, while the snakes had ghostly skin and red-lined eyes. But it was the posers who had the best beauty. Make-up was bold and colourful with many of the models sporting yellow Simpson-esque complexions, dark lips and plenty of pale blue eyeshadow. Meanwhile, on hair, the Elvis duck’s arse was a running motif, sometimes more natural, sometimes supersized and exaggerated with a pompadour that looked like it had been dipped into an oil spill.

Undoubtedly a stand-out look for Men’s AW23, here are the best beauty looks rounding out our top five from this season. And keep your eyes peeled for the Haute Couture SS23 beauty which is already causing a splash.

“Tailoring of the avant-garde” was how Rei Kawakubo summed up her collection of voluminous suits this season, which featured wonky protrusions and thick padding across the shoulder blades. When it came to beauty, the looks were just as avant-garde thanks to electric shock fringes by hairstylist Takeo Arai, who made models’ hair stand on end with what one can only imagine was a huge amount of hairspray. Meanwhile, caged headpieces courtesy of Valeriane Venance and Gary Card were made from wired cables, waxed threads and raffia, creating a witchy vibe.

Thick black stripes of black grease paint crossed the faces of the models at Rick Owens this season, like some kind of goth interpretation of the traditional American football look. The make-up, by Daniel Sallstrom, was further intensified by the models wearing large black sclera contact lenses which obscured the eyes altogether. This look, combined with hairstylist Duffy’s severe slicked-back style and the soundtrack of “Brother Wolf, Sister Moon” by The Cult, created the perfect atmosphere for a collection about, as Owens put it, “REDUCED ARCHITECTURAL SHAPES WITH A WHIFF OF SLEAZY 70S PSEUDO-MYSTICISM.” 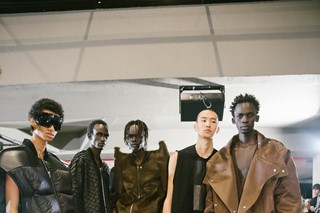 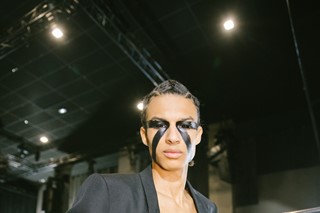 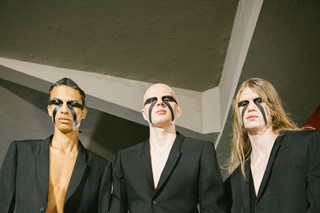 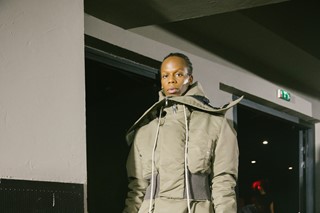 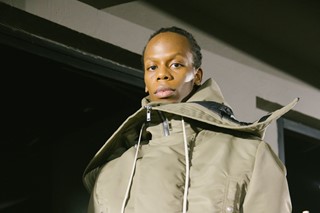 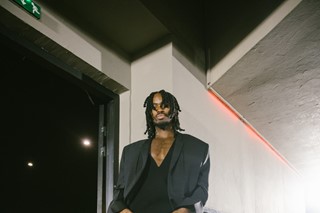 Coloured contacts also made an appearance at Loewe, but this time the result was more angelic than demonic thanks to the milky white lenses and feathered wings that were sported on the runway. Small and bird-like, these wings produced a feeling of fragility which was only emphasised by the bare-legged, boyish models. The make-up artist responsible for this Renaissance-meets-Sci-Fi amalgam was Lynsey Alexander who kept the rest of the face dewy and natural while Anthony Turner’s hair was equally minimal but interesting.

The first fashion week after Euphoria debuted was jam-packed with looks inspired by the hit show, from the colour eyeshadow and rhinestones at Marc Jacobs to the yellow graphic liner at Anna Sui. At Kiko Kostadinov, one couldn’t help but think of the playful Euphoria make-up thanks to models sporting eyeliner in shapes including clouds, fish tails, starbursts and Twiggy lashes. Courtesy of make-up artist Kanako Yoshida, there were also scrawled moustaches on some models – an act of wannabe adulthood that emphasised the Peter Pan youthfulness that infused the collection. Michaël Delmas kept hair natural, ensuring attention remained on the make-up.