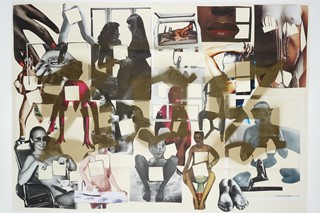 Blondey McCoy has fingers in many pies. He’s a member of the PWBC (Palace Wayward Boys Choir), got his own streetwear brand, Thames London, and “prit-sticked” his way into the London art scene.

To create these works, the artist has used a variety of different methods. He’s also been exploring new technology, including laser printed mirrors – and he’s enjoyed the unpredictability of this experience. “You don’t know how things are going to turn out until they come back,” he says, “some are great, some are shit, which is just the way it is”. As for inspiration, McCoy says that he’s heavily influenced by pop art of the 50s and 60s. “I have always had a soft spot for commercial and ‘in your face’ work,” he explains.

What does the artist want people to come away from his new show with? “I just want it to encourage people to express themselves,” he says. “Be that through creating artwork of their own or simply being open about particular topics of conversation.” He hopes to lead by example, and says that people need to “recognise that the London’s youth are creatively active and that they have no excuse not to get creative, too”.

Blondey McCoy’s Fourth Fancy is on show at the Heni Gallery, 6-10 Lexington Street, London from November 19-27. 50 per cent of the proceeds from the show will be donated to Together for Mental Wellbeing