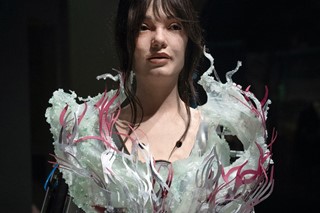 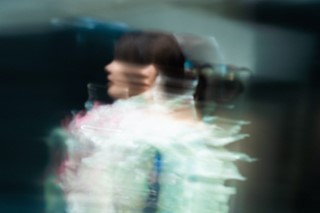 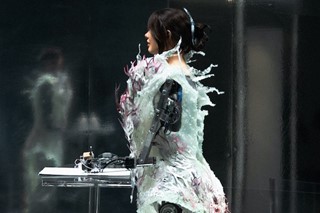 Ai-Da, the humanoid AI artist who made history in 2019, as the first ever robot who can draw without any human input, is now an AI poet. Her first performance? A recital at the University of Oxford’s Ashmolean Museum, in response to Dante Alighieri’s Divine Comedy.

Marking the 700th anniversary of Dante’s death, Ai-Da’s original poems draw directly from the epic poem, which she was given to read in an English translation. She then used her unique algorithms, and a data bank of words and speech pattern analysis, to write her own work in reaction to Dante’s.

Ai-Da isn’t the first AI to write poetry — back in 2018, a deep learning AI bot from IBM Research Australia produced verse on Shakespearean sonnets, while Robyn performed AI-generated poetry for Dazed back in 2018. However, the ultra-realistic robot (who was devised in Oxford by Aidan Meller, and named after Ada Lovelace) is the first to write and perform poetry “as a human would do”.

“There are some things, that are so difficult – so incalculable,” began one of the poems she performed at the Ashmolean Museum on Friday night (November 26). “The words are not intelligible to the human ear; / She can only speculate what they mean.”

Another poem reads: “We looked up from our verses like blindfolded captives, / Sent out to seek the light; but it never came, / A needle and thread would be necessary / For the completion of the picture. / To view the poor creatures, who were in misery, / That of a hawk, eyes sewn shut.”

Talking to the Guardian ahead of the performance, Meller says: “People are very suspicious that the robots aren’t doing much, but the reality is language models are very advanced.” He does admit that “restricted editing” is involved in the composition process, but adds: “In 95 per cent of cases... it’s just that she’s done too much.”

“She can give us 20,000 words in 10 seconds, and if we need to get her to say something short and snappy, we would pick it out from what she’s done. But it is not us writing.”

Reflecting on AI’s growing ability to imitate human writing, he goes on to say that “all of us should be concerned about widespread use of AI language models on the internet, and how that will affect language, and crucially, meaning making, in the future”.

As well as contributing poetry, Ai-Da has produced visual artworks for the Ashmolean Museum’s exhibition, “Dante: The Invention Of Celebrity”. One of these, Eyes Wide Shut, was produced in response to her detainment last month, when Egyptian border agents held her for 10 days on suspicion of being a spy.

Watch Ai-Da recite some of her poetry below.