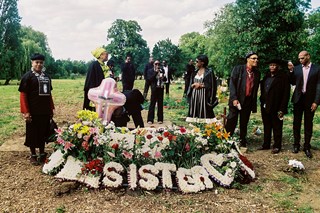 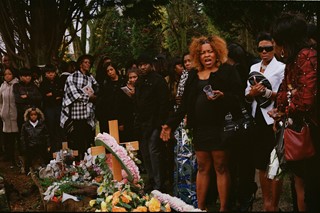 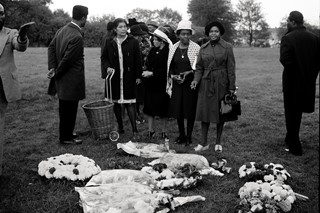 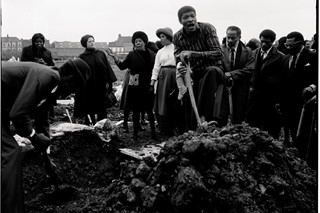 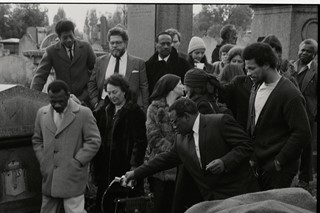 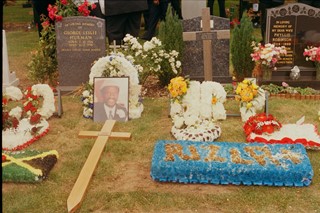 Photographer Charlie Phillips began taking photos at London’s African Caribbean funerals half a century ago. Born in Jamaica and growing up in “The Grove”, West London, what might seem a morbid path to tread was, in fact, completely organic – with Phillips serving as an altar boy for St. Michael church in London’s Notting Hill during his childhood. On finding a Kodak Brownie camera left behind by a black American G.I. at 11-years old, Phillips took to documenting the community around him, including the unique processions that took place. “It was always a family or a friend. I thought I would document the moment and never thought nothing about it,” he says.

Although now residing in South London, the heritage of West London’s African Caribbean community is immortalised in his work – giving it a much-deserved platform, something he believes has never been fully available. Now in his mid-70s, and as lively as ever, Phillips will see his body of work, partially forgotten for decades, unveiled at London’s Photofusion gallery in How Great Thou Art: 50 years of African Caribbean Funerals in London – the exhibition’s name a nod to the popular hymn often sung to celebrate the deceased. Eager to tell his and the story of the community and its traditions, the photographer has provided us with a short film as we speak to him about the early days, the funeral he couldn’t capture and why he’s carrying the torch for the traditions close to his heart.

How did you get into photography?

Charlie Phillips: I was an altar boy at a church called St Michael when Kelso Cochrane was buried – one of the biggest funerals in Notting Hill at the time. It was just after the race riots and because my parents thought there would be trouble that’s the only day I didn’t go to the procession. These were the days where for coloured people, it wasn’t safe to walk on the street, especially when Oswald Mosley was at his peak.

In those days there was a Cold War and there used to be a lot of black American G.I.’s who would come over to the Grove [Ladbroke Grove]. One of them left a Saturday Evening Post and there was an illustration by an artist called Norman Rockwell called “The Runaway”, I was fascinated by it. That picture always appeals to me because I thought as soon as I get old I want to move away from all this and find a place to live. This G.I. also left a camera, a Kodak Brownie, by accident so I just started to photograph my community while I was growing up. This was when I was about 11, 12, 13 and when I was about 18, 19 I’d started to take it more seriously.

You're quite old fashioned in your approach – from washing your early prints in the community bathtub to continuing to work with analogue cameras as opposed to digital ones...

Charlie Phillips: I’m from the die-hard school so that’s why they’ve made me redundant, because everyone has got a camera now and they’ve photographed more or less everything. I’ve got to go out to space now (laughs). When I was about 12, 13 I used to do a paper round and I bought one of those Johnsons “Do It Yourself Photographing Kits”. I’d do my contacts by switching on the lights and count to ten and then turn them off. Very basic. I’d wait for everyone to go to bed and then I’d get the radio and tune into Radio Luxemburg and listen to rock ‘n’ roll; Liz Richards and Elvis.

And when did you start visiting funerals and taking photos?

Charlie Phillips: It was always a family or a friend. I thought I would document the moment and I never thought nothing about it. So, over the years when somebody died in the community I always walked with my camera and documented one or two events. What you notice at the funeral is the fashion, the style, the colours – the deceased usually have their own views on how you should dress. The last one I went to they instructed everyone to wear bright colours.

I took the photographs but I wasn’t commissioned. I just thought over the years I’ve got to, these were for my kids, [to show] how the culture has changed. The kids [now] are not interested to see our past. I forgot everything about it and if it wasn’t for Lizzy [King, co-curator] who came along and ransacked my apartment I would never have found them. She brought them out alive. These days we don’t have the celebration like we used to. It’s part of a cultural history and, whether you like it or not, it hasn’t been properly documented. A lot of people were amazed that such tradition is still in London. I’m documenting the alternative London – I’ve always been part of alternative culture.

How have the traditions been carried over from the Caribbean to London?

Charlie Phillips: A Caribbean funeral is not just about burial, it’s about celebration as well. You celebrate a week before, a week after and a year later when you have the remembrance. You can see some of the etiquette, like the dogs and horse-drawn carts and all that. Some of the traditional songs like “How Great Thou Art” was a typical theme song for African Caribbean funerals, but now we’re coming up to the fifth generation everything has changed. The fourth generation songs now are Frank Sinatra, “My Way” and [Tina Turner] “Simply The Best”. You don’t sing the [“How Great Thou Art”] song anymore unless it’s a very elderly person.

What was the last funeral you photographed?

Charlie Phillips: About six weeks ago, but that’s not in the exhibition. It’s just to keep up the documentary for itself because after 60 years a lot of us still haven’t been accepted as part of the London culture. This is part of the London culture that hasn’t been given a proper platform – a cultural institution, for instance. This is community-led work that’s creating interest.

Can you think of one funeral you were photographing that stands out in your mind?

Charlie Phillips: One of my childhood sweethearts, that was touching. When I was young we used to play dollhouse with this little girl and this other friend of mine, and she always asked me to be daddy while she was mommy. 50 years later her dad said to me, ‘I can’t understand how you didn’t marry my daughter’. It’s one of the only funerals I thought I couldn’t photograph, I didn’t want to or I couldn’t document it properly. But the most touching funeral was my aunt Susie. It was the second biggest black funeral after Kelso Cochrane.

Why was it so big?

Charlie Phillips: Amongst our community (the days where we couldn’t get rooms to rent) sometimes you’d see on newsagents, “No Irish, no Blacks, no Dogs”, and she was a sort of landlady. She came here after the war and she had a couple of houses, and for new arrivals you could be sure you’d get a room or share a room with someone. She was very popular and so at that time all the African Caribbean community turned out and went to her funeral.

Charlie Phillips’ How Great Thou Art: 50 years of African Caribbean Funerals in London will run from 7 November – 5 December, 2014 at Photofusion gallery, London. A book will also be released in conjunction with the project.