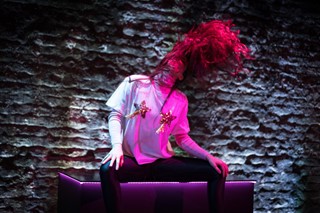 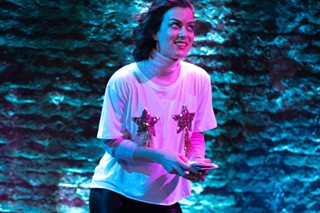 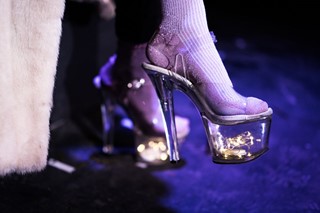 Joana Nastari is set to wreak havoc at The Edinburgh Festival. The British-Brazilian entertainer has tumbling dark hair, a fierce hazel-eyed gaze and flushed cheeks. With a high-kick, her leg flicks out from behind the stage curtain and she runs her foot – clad in towering transparent platforms and pink sparkly socks – along its edge. Her rhinestoned magenta trouser suit would make Elton blush. However, it’s her words, not her garb, that sting.

Nastari, 28, plays Bea, an exotic dancer who’s Catholic mother is repeat-calling her; she’s just found out what her daughter does for a living. As the play opens, she strolls on stage, cradling an old, dusty, sacred text – a nod, Nastari says, to a reappropriation of her former Catholic faith. “This is the stripper church,” she proclaims, before preaching, “thou shall not judge.”

Fuck You Pay Me (FYPM) is a show about strippers, for strippers, by a stripper. Written and performed by Nastari, it had its humble debut last year inside a camping tent at a festival. Fast forward to now, and it has just finished a sell-out, award-winning run at Vault Festival and smashed its Kickstarter target to go to The Edinburgh Festival.

“Sex workers don’t want to be saved. These are whole, intelligent people who are making choices for themselves” – Joana Nastari

It’s a direct, nuanced, genius attack on the crippling stigma that surrounds sex work globally. While strippers appear in the media as voiceless, cheap bodies, Nastari rewrites their narrative with first-hand panache. From start to finish, the audience is kept on its toes as Bea navigates her way through her internalised stigma, flitting from reflections to punchlines and flirtations to anarchic battle cries.

“It celebrates the women I met at the strip club,” says Nastari, the morning after her preview at The Hoxton Square Bar and Kitchen in Shoreditch. “It’s about work, female power, and money, and how my experience working at the strip club was completely different to what I’d been told by society. I was blown away that the narrative was a complete lie, so it was really important to do this play.”

With President Trump’s recent FOSTA and SESTA bills – intended to curb illegal sex trafficking online while realistically pushing the industry further underground – forming the cultural and political backdrop to FYPM, and a similar bill on the cards in the UK, Nastari’s work bubbles with urgency. She laces together themes of stigma, activism, female relationships and sex with class, using humour to offer a fresh and brutal look at how society treats those considered other. Here is everything you need to know.

Society tells us two tales when it comes to sex workers; the happy hooker and the tragic whore. Both always require saving. Case in point, Vivian in Pretty Woman is swept off her feet by the handsome millionaire Edward, and Fontine in Les Miserables slips from hope’s grasp after Jean Valjean fails to rescue her from fate.

Refreshingly, none of this applies to Bea. “She is reconciling her own stuff,” says Nastari. “She doesn’t know how she feels about her job automatically. She’s carrying internalised shame, which she assumes her family will feel about her, which she feels about herself sometimes and is trying to forget through late nights, drinking too much and sitting on her phone. It’s nice to see someone going through an internal struggle and coming to terms with it as opposed to being saved by someone.” This forms the basis of how Nastari is reframing the narrative, linking to the activist slogan Rights Not Rescue. “Sex workers don’t want to be saved,” she says. “These are whole, intelligent people who are making choices for themselves. They just want to be respected and have rights.”

It’s not that Bea is a strictly autobiographical character, more her struggles, joys, and quirks resonate with the entire stripper community. This character is constructed for the stripper herself, not the voyeur, and it’s human down to the crumpled baggy top on her shoulders and trainers on her feet (her costume for the majority of the show). It’s refreshing for women in sex work community, and Nastari seeks to give out as many free tickets to them as she can. “If it can make them feel pride in themselves and the work that they do, or feel loved and a bit of solidarity, that’s the most important thing we can do,” she says.

SHE IS INFLUENCED BY HER FEMALE FRIENDSHIPS

To wider audiences, the most familiar aspect of FYPM is Bea’s female friendships. Like many women, these are the structures that keep her upright when everything else crumbles; the beings that bring her true joy and power. She has her work wife, her work crush, and an overwhelming admiration for the other girls on the floor. In real life, that was how Nastari, too, measured the value of working at the strip club.

“Friendships develop quickly and intensely in that environment,” she says. “I had pure admiration for these women. Some didn’t even have any time for me or weren’t directly friendly, but it was a complete pleasure to watch them be so confident and in-action about their lives. At the strip club, everyone is there to hustle. It requires so many skills to be good at it, and it was these powerful, elusive qualities that impressed me so much. To be around so many clearly powerful women made me feel more powerful, too.” Make no mistake, Nastari lets you know she is wholly in control from the very first second. When she switches into Bea’s seductive, exotic stripper persona Holly, everyone else becomes her prey.

For a year, Nastari ran sex worker-only nights by the name of Sleazy Virtue, aiming to bring women together and build rooted communities. “I’ve never been in such an amazing space. We did workshops, discussion groups and performances for each other. People do this on their own and it’s such a transient place, so creating communities is the most important thing. Being around other sex workers is invaluable because all the stuff you have to explain to other people is a given.” Now in Edinburgh, Nastari will be running weekly breakfasts for sex workers in the city, which she advertises through Instagram.

SHE TAKES DOWN STIGMA

Female sex work marinades in stigma, and there have been infinity proof points playing out in the media this summer. In July, male strippers The Dreamboys embarked on their national tour. It was billed as “the UK’s most popular female night out”, with reality stars like Jake Quickenden queuing-up to do guest appearances for the screeching crowd. There isn’t a sniff of stigma in sight. By contrast, Love Island’s Megan Barton-Hanson (a former stripper) lived-out a portion of her internalised stigma on screen this summer, unable to believe that her partner Wes Nelson’s family would accept her stripper past. Meanwhile, tabloid splashes included, Megan Barton Hanson 'had multiple sugar daddies' while working as stripper before entering villa, and, Wes Nelson stunned at Megan Barton-Hanson’s PORN past.

The sad truth is that female sex workers are vilified in a way that male acts like The Dreamboys aren’t. They lose friends when outed, suffer slut shaming and are thought of in reductive, crass, non-human terms, all of which Nastari has experienced. “Stigma gives people permission to treat others like less,” she says. “Female sex workers really internalise the shame that they absorb from society. A rude joke or an ignorant statement is the butterfly wing which blows across our society and results in the violence against and the death of sex workers eventually.”

So, how does Nastari feel about the groups gunning for a total ban on strip clubs? “I will absolutely not accept that seeing more women doing sex work is the reason that women are objectified,” she says. “Women are objectified by society, and that is reflected in sex work, but it’s not the work itself which is the problem. The Dreamboys is a fucking fun night out. It’s a shame there’s so much stigma against female strippers, because it stops these buildings from being safe, fun, vibrant hubs of sensual nightlife, which are actually highly social environments.”

SHE ISSUES A CALL TO ACTION

Nastari is worried. The global sex worker community is facing its biggest challenge yet, with President Trump’s FOSTA (Fight Online Sex Trafficking Act) and SESTA (Stop Enabling Sex Traffickers Act) beginning to fracture communities and endanger sex workers in the USA by pushing the industry underground. The Independent wrote. “There have already been reports of assaults on sex workers, even deaths, and it has affected sex workers’ rights of association.” The Desiree Alliance sex worker congress was cancelled for fear of putting organisers and attendees at risk. A huge online censorship dissolved communities of sex workers and years worth of client registers formed to keep them safe.

To add salt to the wound, there’s a similar bill being discussed in the UK right now. “To have that happen here is really sad and scary,” says Nastari. “It’s going to directly put the lives of people I know in danger because they’ll end up with no work, or taking work that’s dangerous to them because they can’t check their clients or communicate about being safe. It makes you feel marginalised and attacked, and they haven’t even consulted groups of sex workers. The abysmal thing about it is that it none of these bills help sex trafficking or sex workers.”

Throughout FYPM, she launches a politically-charged assault on stigma through different guises, but it’s during her dance in the final scene that it hits its crescendo and the audience goes wild. To the soundtrack of Cardi B’s “I Like It”, she twists, turns and writhes across the stage before holding up a series of activist placards that illustrate her cause. Sex Work Is Real Work, No Shame, Stigma Kills and My Body My Business hammer home her agenda. Her battle cry? Feminists Spend Money At The Strip Club. Everyone gets on their feet, whooping and cheering.

SHE IS LOOKING TO THE FUTURE

“If we can do a tiny bit to erode some stigma that would be great,” says Nastari. “We are putting our brick on the pile of amazing people that are trying to do the same. The best outcome would be to do a run at a London theatre; there’s a huge community of sex workers in London, so it would be a sign of real acknowledgement to this narrative being important.”

The takeout from FYPM? We are all Bea. “Her admiration for the other strippers – the beautiful things in them is something you rarely see,” says Nastari. But she has crushes that make her pink with embarrassment and friendships inspire her to the core. She hates her work and loves her work. She is as brilliant and as flawed as the rest of us. “The play celebrates these women, even if they don’t like their jobs,” says Nastari. “You shouldn’t have to love your job to get respect as a human.”

Fuck You Pay Me is written and performed by Joana Nastari, and directed by Fringe First Winner Bethany Pitts. It will be showing at Assembly Rooms, Edinburgh from 2 – 26 August.