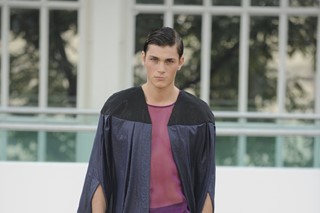 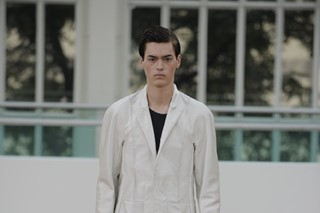 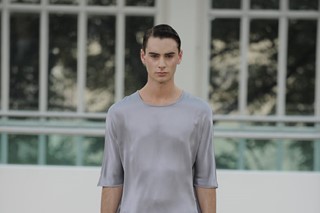 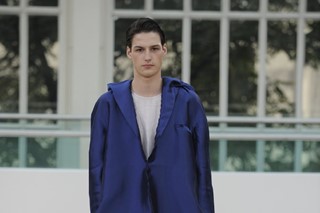 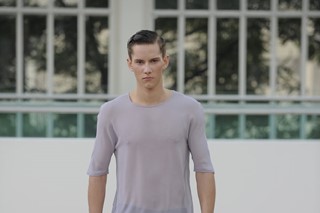 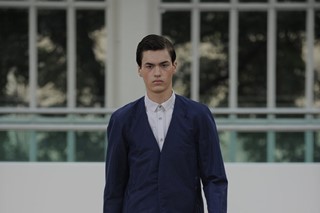 London Fashion Week produced a wave of fresh talent for S/S11, and menswear designer Felipe Rojas Llanos, with his shiny fabrics, structured shapes and a sharp attention to detail, is certainly one newbie to get excited about. Born in Chile and raised in Sweden, Llanos found his feet studying at Central Saint Martins, where he graduated with an MA collection that was snapped up and sold exclusively by Browns.

This season, Llanos has enjoyed his first on-schedule debut, showing as part of the prestigious MAN collective, a show masterminded by Topman and talent scouts Fashion East. His well-received S/S11 collection of transparent tees, voluminous capes and tailored jackets exude a minimalist elegance with just a hint of playful rebellion. Dazed Digital caught up with Felipe to discuss his ideas, inspirations and a childhood obsession with graphic novels.

Dazed Digital: What was it like growing up in Sweden?
Felipe Rojas Llanos: I loved it. I think a lot of my calmness comes from that place. I grew up in Malmö, which is this beautiful city in the south. I had a very different Swedish upbringing being part of a loud Latin family and I think the contrast of these two cultures really left a trace in me that has helped me view things differently. I love Sweden and still visit regularly but eventually it became too small and, besides, I really wanted to move to London.

DD: When did you first become interested in Fashion design? Why did you choose menswear?
Felipe Rojas Llanos: I always played with the idea of designing womenswear, but I remember this one exhibition that I went to at the V&A called Radical Fashion where I first discovered what creative designers really could accomplish. It was an exhibition that showed the talents of Westwood, Alaïa, McQueen, Lang, Yamamoto, Watanabe, Gaultier but it was really Hussein Chalayan with his amazing ability to mix architecture and design and turn it into a borderline of art and fashion that sparked something in me. I just thought there was something in designing for me, too, and when it came to deciding I knew menswear would be more challenging, so I went for it.

DD: Has it been a challenging process getting your label started?
Felipe Rojas Llanos: It is a constant challenge. We are still at a very early stage and it’s hard, but at the end of the day the reward comes from being able to create whatever you want, which is why we do it. To create beautiful things, it’s exciting and I feel so lucky to be able to do this.

DD: What was it like showing with MAN for SS11?
Felipe Rojas Llanos: Amazing. I am a big fan of the Opera and Ballet so to show our first on-schedule collection at the Royal Opera House, was a dream come true. I am grateful to Lulu Kennedy and Topman for seeing something in what we do, and it has been an incredible year.

DD: You appear to have a strong signature style. How would you describe your aesthetic?
Felipe Rojas Llanos: Well, we try to create minimal, beautiful garments with a couture element to them. When I was doing my MA collection at Central Saint Martins I wanted to create patterns that were not common in menswear, so what we design is not something I would say is 'trendy', the clothes are more timeless in the way that you could probably wear them five years from now without feeling they have dated.

DD: Why did you choose The Legion of Superheroes and The Village of the Damned as sources of inspiration for your SS11 collection?
Felipe Rojas Llanos: Graphic novels are something I’m constantly reading and alongside the performing arts, movies are my favourite art form. During the time I was creating my S/S11 collection I was re-reading 'The Legion of Superheroes', and decided to dedicate the collection to one of the female heroines that I have been obsessed with since my childhood. 'Village of the Damned' has this grey tone - schoolboy uniform look that I thought would fit perfectly with what we were doing. The shapes were inspired from some Yves Saint Laurent and Dior dresses from the 1950s.

DD: What else inspires you?
Felipe Rojas Llanos: Everything. You can find inspiration anywhere just by being observant of your surroundings.

DD: What would you be doing if you weren’t designing?
Felipe Rojas Llanos: I’d be an unemployed actor or dancer.

DD: Any hints towards what we can expect for AW11?
Felipe Rojas Llanos: A beautiful show, you don’t want to miss it.