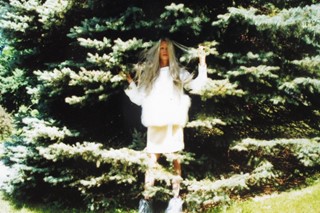 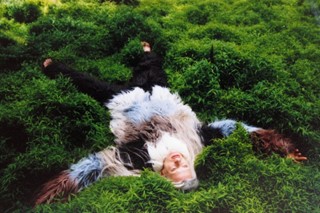 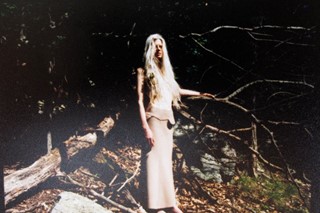 The self described “first weird-looking model”, iconic 90s supermodel Kristen McMenamy brazenly stormed into the fashion world with her distinctive features and bleached eyebrows, helping overturn every tired beauty cliché and making way for a whole new generation of girls who didn’t fit the mould. Notoriously irreverent, Kristen used to stride down runways saying ‘fuck you’ under her breath, and famously steamed past security at the Ritz into Versace’s fitting, on hearing that he thought she was too fat for his show. Kristen stripped down to her heels, demanding “You call this fat?” and was unsurprisingly booked on the spot. Kristen has worked with luminaries ranging from Helmut Newton, Richard Avedon and Juergen Teller to her favourite designer Karl Lagerfeld, who walked her down the aisle at her wedding.

Now 46 and a mother of three, Kristen isn’t going anywhere. She’s Dazed’s cover star this month, in a forest odyssey inspired fashion feature shot by art photographer Tierney Gearon and styled by Dazed Fashion Director Karen Langley. Kristen reveals that it was her eldest daughter who encouraged her to model for Dazed. "My 16 year old daughter fills me in on a lot of stuff. She had an issue of Dazed with The xx on the cover, and that convinced me to do one for you too!” says Kristen. “I thought Dazed was cool, because you deal with culture and it’s not just a fashion magazine. It’s really nice, being able to work on both
sides."
This Dazed exclusive video, created by Tess Jouany, teenage daughter of make-up artist Teresa Pemberton, offers a behind-the-scenes look at the day of the cover shoot.
Read More