SS23 collection “CELEBRATION” broke away from the codes of Virgil Abloh, while honouring his freedom of thought 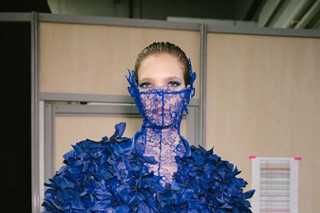 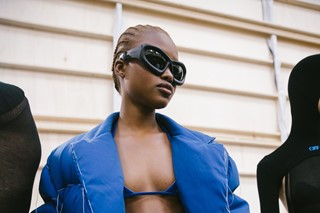 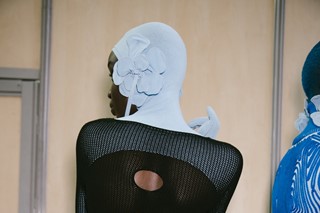 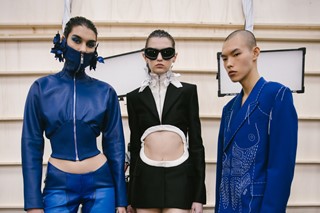 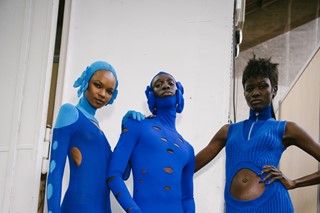 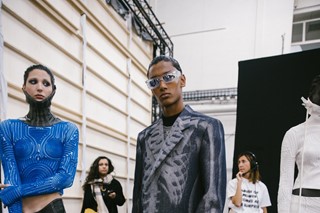 Last season, Off-White’s atelier paid homage to its founder Virgil Abloh with a collection that travelled through some of the late designer’s greatest hits. Not long after, longtime Abloh collaborator and Dazed editor-in-chief IB Kamara was appointed as his successor, taking on a new role within the company that will see him steer the brand’s creative vision into the future. Today’s collection, titled “CELEBRATION”, will be Kamara’s first.

Shrouded in all the usual secrecy, the only clue as to what the SS23 would offer came via a giddy Instagram post, featuring a model doused in blue paint, bouncing in and out of clouds. “A celebration of life, progress, and new work in process,” the invitation read ahead of the show, promising to solidify “pillars that Virgil embodied: togetherness, kindness, freedom of thought, and ultimately, what it is to be human.” As we ready ourselves for the next chapter in Abloh’s legacy, here’s everything that went down at the SS23 Off-White show.

HALF OF PARIS TURNED UP

Off-White shows are often crazy, with thousands of fans of the brand and its mega famous attendees crowding around the entrance trying to get a glimpse of what’s going on inside. This time was even wilder than normal, with screaming kids clambering on top of parked vans for a better vantage point. Walking the blue carpet up to the show space were the likes of Naomi Campbell, Yasin Bey, Halle Bailey, Evan Mock, Rickey Thompson, and Honey Dijon, as well as the iconic Erykah Badu, who’s having a bit of a fashion week momenté right now.

IT REVOLVED AROUND A FORTNITE CUBE

As guests bundled into the venue, an enormous LED, Fortnite-style cube rose from the floor, bathed in an ominous cobalt light. After a couple of minutes, a video was projected onto the structure, with the same Blue Man Group of Y-front wearing models manning a carousel of cloud-strewn doorways – which VIP guests used as some kind of celestial backdrop for their content, naturally. At the sudden lock of a key, models began to pace through open doorways, multiplying before them with no end in sight, until suddenly, the protagonist fell through a cloud, and broke into a new dimension.

THE COLLECTION PUT THE BODY IN BLOOM

Lights submerged and percussion began to crash overhead, giving way to the show’s opening look: a motorcycle jacket and mini-skirt combo, sliced at the midriff to reveal a lace bodysuit underneath – the whole thing practically begging for a Rihanna endorsement. Cropped bomber jackets zipped-up to the mouth, while tailored vests and jackets bore floor-skimming lapels. The collection seemed to trace the anatomy of the human body in a series of trompe l'oeil affectations, with a faded skeleton appearing across denim skirts and suits, knitted polos, sheer white columns, and technical bodycons. But body-mapped bones soon shapeshifted into cyborgian, post-human outlines, emerging on the surface of fatigued suiting throughout the collection.

Another motif this season was a hydrangea – a symbol of gratitude, grace and beauty – which each and every guest was gifted before the show. Their lilypad petals were festooned across overblown jackets, LBDs, and baroque collars, and delicately placed onto nipples, ears, and swimming cap-style hoods – one of which draped into a lace-embroidered trapeze-lined dress. As we’ve seen across SS23, the midriff was very much on show, an erogenous zone exposed under cropped and hacked blazers and careening cut-outs. Needless to say, this collection was all about the colour BLUE – which is perhaps Off-White’s answer to the Valentino pink or Ferragamo’s red. Though it was interspersed with knife-cut, black tailoring, and puffer jackets undone with trailing threads, it was further messaged with the gradual arrival of a head-to-toe painted dance troupe, who contorted their bodies in languid shapes, thronging around that big old cube.

THERE WAS A LIVE PERFORMANCE FROM TSHEGUE

…which only became apparent if you prised your eyes away from the catwalk and looked up – the Parisian duo climbed up onto the top of the cube at the centre of the show to play a special live set.

IT BROKE AWAY FROM VIRGIL’S CLASSICS

Though there were whispers of streetwear and a slight utilitarian accent – particularly on all those wipe-clean bags, which were worn across the front of the body like one of Abloh’s signature harnesses – this collection went beyond the now-familiar codes that Virgil Abloh had set. There were no tulle-jacket hybrids, no Nike link-ups, no 3D cityscapes, and barely anything was put in quotation marks. Since Abloh’s untimely death in the November of 2021, countless exhibitions, posthumous collaborations, and commemorative collections have come to the surface – but perhaps it fell on the shoulders of his own brand to move the conversation forward, to look ahead and allow a new generation of creatives to interpret his legacy.