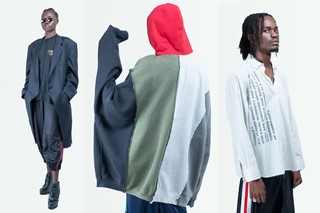 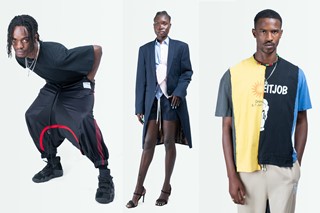 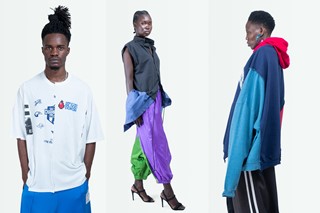 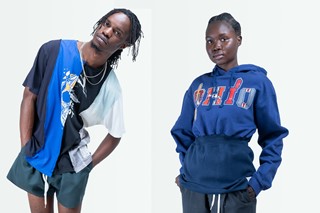 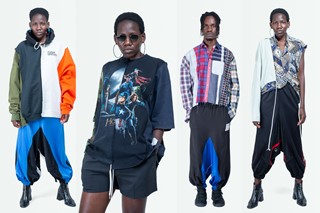 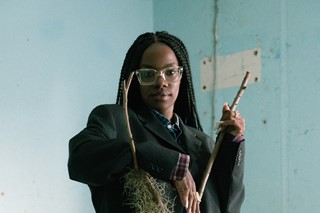 In 2015, Olly Holland, a human rights lawyer working in Nigeria, uploaded a photo of three women walking along a dusty roadside. Laden with trays of bananas, the central figure was dressed in a shrunken blazer and a scoop neck vest boasting ‘GINA’S HEN DO BLACKPOOL 2010’ in neon WordArt. “Proof that all charitable donations go a long way. Please retweet to help and thank Gina,” Holland captioned the now-viral image, which accrued hundreds of retweets before it was eventually deleted.

The assumption that this woman had benefited from some kind of Western altruism was unfounded, though. What Holland had captured was a much knottier second-hand clothing trade, where wealthy nations rely on African countries as waste disposal systems. In Accra, for example, some 15 million used garments pour into the city every week, with an estimated 40 per cent deemed worthless on arrival, flooding landfill sites while decimating local textile businesses. For designer and activist Bobby Kolade, who grew up wearing secondhand clothing “like everyone else” in Kampala, the guise of charity wears thin. “It’s complicated. When I lived in Berlin, I threw my unwanted clothes into clothing collection bins, not really knowing where they would end up,” he says. “But after all the research we did for our podcast Vintage or Violence, I realised how that act of easy disposal is an act of clothing terrorism.”

In Uganda, 80 per cent of clothing purchases are secondhand, and despite producing high-quality raw cotton for the rest of the world, its own textile industry has failed to bounce back from the near collapse of production in the 1970s. “There is no local alternative to the diversity of style and choice that second-hand clothes provide”, Kolade says, which has proved a catalyst for his BUZIGAHILL venture, a new fashion label repurposing pre-owned garments bought in Uganda and selling them back to the Global North. “We have a ten year plan to build small, specialised factories spread out across the country, some for repurposing used garments, some for hand woven textiles, and some for artisanal production,” he explains, detailing his goal of revitalising Ugandan manufacturing at large.

Having interned at Margiela and Balenciaga, Kolade has been forced to “abandon the design processes [he] learnt in Paris” – though his tutelage is reflected back in all the rough-hewn tailoring, spliced sportswear, cut-and-paste graphics, and tactile seams which trace his debut collection, which drops today.  “We don’t work with moodboards and references. Our moodboard is each bale of clothing we unpack, the contents of which informs the design process,” he says, sourcing miscellaneous bundles of stock from clothing importers. “You’re relinquishing control over the general look of the collection so I’ve had to be flexible. One bale was particularly disappointing, though. It was labelled ‘NYLON TRACK PANTS’ but contained 80 per cent hideous jogging tights. We’re still figuring out what to do with them, we can’t return them.”

“The process is more reactionary than directional,” Kolade says, but BUZIGAHILL is hardly derivative, with the designer gesturing towards a set of elongated suit jackets, forged from old trouser legs and silk scarves originating from South Korea. “They look more like a tux, really, but they’re surprisingly very contemporary”. With the sale of those pieces, Kolade and his team will funnel profits into the Aiduke Clothing Research non-profit, “creating a link between artisans and designers so that more brands are using locally produced materials for their collections”. Ultimately, however, he knows that Uganda’s second-hand trade is symptomatic of a more pervasive belief system that dominates international politics.

“The comfort of colonialist consumption needs to be broken, we need radical, systemic changes. If people from a certain demographic believe they have the right to exploit people of a different demographic, then they need to revisit their constitutions,” he says. “My friends at The Or Foundation in Accra say that Big Fashion’s billionaire owners and CEOs should seek therapy to help them confront the mass dehumanisation of our industry brought on by their greedy decisions. And I agree.”