With Francesco Risso of Marni taking to the Collina Strada catwalk, we take a look at all the times a designer has crossed enemy lines

The way we talk about fashion is almost identical to how comic book fans discuss movie franchises. Historically speaking, luxury labels have always existed independent of one another, with each designer presiding over their own universe, much like Marvel or DC. From a young age, we pledge allegiance to a small number of brands and fashion ourselves in their image, tearing down anyone who might encroach on their territory. What is clothing if not merch? What is fashion week if not a month-long Comicon? And what is Fendace, Gucciaga, and Skendi if not fan fiction?

Over the past year, however, fashion’s planetary system has seemingly collapsed in on itself, bursting open blackholes with every hack, swapping, and cross contamination. But what if the borders and boundaries of those worlds were more permeable than we were led to believe? What if designers were not the warring entities that Diet Prada hawks them as? What if they were muses, bedfellows, even lovers? Offline, fashion designers are not only aware of each other but, more often than not, they’ve studied together and forged close-knit cabals. They are friends, which is a bit like collaborating, but in real life.

Take Hillary Taymour of Collina Strada, for example, who asked Francesco Risso of Marni to star in her AW22 show last week. It felt incestuous, silly, and a lot of fun – and while it tends to be celebs making all the suprise appearances these days, there is a time-worn tradition of fashion designers making cameos on each other’s runways, hailing back to when Martin Margiela walked for Jean Paul Gaultier in 1986. There’s something so exhilarating about designers publicly acknowledging each other’s existence – it’s like The Avengers, but not boring. Below, we take a look at all the times designers have crossed (fr)enemy lines.

In 1998 Vivienne Westwood walked for Yohji Yamamoto’s autumn-winter menswear show. She wore a tweed two-piece which had been festooned with acrylic flowers, clown-like trousers so wide she shoved her arms down their sides, and an oversized mob suit topped with a bowler hat. She swaggered in typical Westwood manner, with a pouty snarl and her hands tucked behind her back, leaning back on her shoulders like an old-fashioned police officer. “If you’re a good designer, you appreciate and love the work of another good designer, because they do something you don’t do and that’s what you really like about it,” Westwood told AnOther magazine. “Yohji’s work is a look and a big idea. I love Yohji.”

Last year, in a documentary made by Loïc Prigent, Jean Paul Gaultier revealed that Martin Margiela walked his 1986 Russian Constructivist show. Despite committing to anonymity throughout his career (there are less than a handful of photos of Margiela online) Gaultier decided to unmask the designer 40 years after he emerged on the catwalk. “Should I say who it is?” asks Gaultier. “Is he well known?” replies Prigent. “Yes, but not his face.” As is fashion folklore, Margiela’s first job in Paris was working under Gaultier, who cast members of his studio alongside models for his AW86 show, explaining to Prigent that “they worked with me, so we're enjoying the party.”

alexander mcqueen for comme des garçons homme plus’ fall 1997
—
few days after lee's first show for givenchy as creative director, he was asked by rei to walk for cdg. lee agreed and opened her show. mcqueen loved rei bc she doesn't compromise bc “compromise makes ppl dull.” pic.twitter.com/YHE0xFP15Z

In 1997, having relocated to Paris to take the helm of Givenchy, Alexander McQueen made a surprise appearance as part of Comme des Garçons’ Homme Plus show. There, he followed in the footsteps of John Waters and Jean-Michel Basquiat, donning a loose-knit black sweater, wide-legged plaid trousers, and shearling booties. Much of McQueen’s personal wardrobe was made up of Comme, numbering baggy, striped cotton shirts, raw denim jeans, and unstructured tailoring. That Rei Kawakubo asked the designer to walk was symptomatic of his own cultural cachet and the reverence went both ways: “What’s really impressive about her is that she’s never backed down,” he said, “I believe everyone should be like that.”

When the London designer formerly known as Posh emerged on Maria Grachvogel’s AW00 runway, a collective gasp fell over the audience. The pop star was trundled out twice that evening, once in a lime green vest with matching satin hot pants and another to close the show in a burgundy, corseted gown with flamenco ruffles cascading from the hip. At 25 years old, this was back when Beckham was more “Wannabe” than Junya Watanabe, when she hadn’t so much as stepped foot in an atelier other than to be fitted for a red carpet look. As she swung her arms like a naval officer and clasped her waist before the front row, the crowd were blithely unaware that they were watching a designer in the making.

Before Sterling Ruby, no major artist had ever produced a fashion line, which he debuted at Pitti in 2019. There were 45 looks in total, modelled by a few of Ruby’s friends, like the actress Mackenzie Davis and designer Pieter Mulier. The now-artistic director of Alaïa stepped out in a battered, pink denim co-ord, similar to the kind of thing Ruby had made for Calvin Klein. As Raf Simons’ right and left hand, respectively, the duo had forged a close relationship ever since Simons asked Ruby to collaborate on menswear in 2014.

Set in the bowels of a distribution warehouse on the outskirts of Paris, Glenn Martens’ AW22 show inhabited many characters. There was the spirit of Jean Paul Gaultier, who haunted the cavernous space with a series of trompe l'oeil slips, and then there was the very real presence of stylist Camille Bidault-Waddington and fellow Belgian designer Olivier Theyskins, who both schlepped up and down Y/Project’s 5-minute-long runway. Just before the show started, Theyskens told Vogue: “Glenn proposed it to me. I know him and I love him. We work in the same neighbourhood and we both come from Belgium.” As he began to pluck stray threads from a nearby model’s shoulder, the designer added: “I think Glenn appreciates the freedom of characters.” 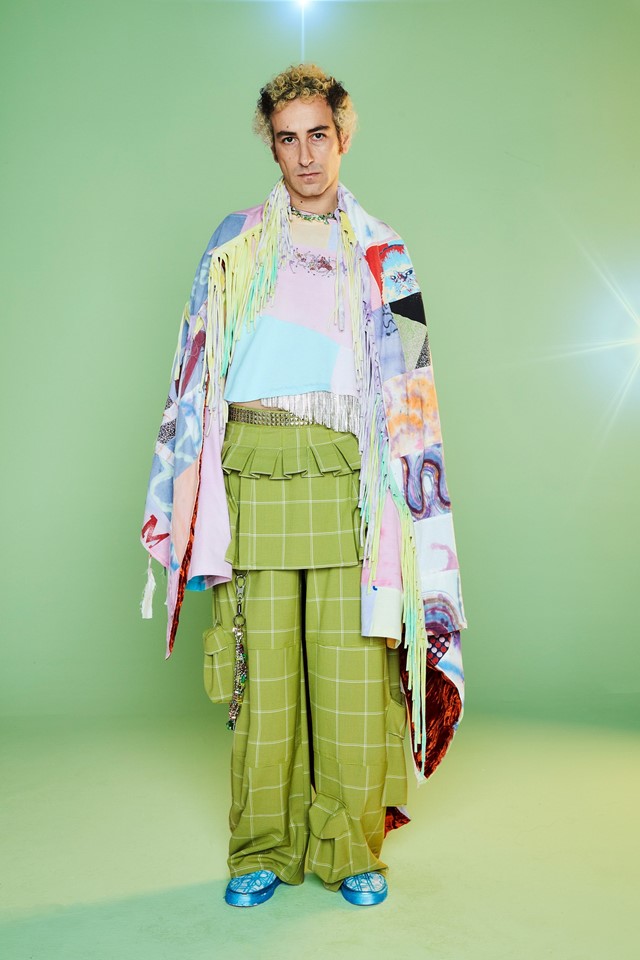 Throughout the pandemic, Hillary Taymour found escape in the ditsy, stupid, and frivolous, debuting collections across videogames, animorphs, and rooftop farm sets. And for her AW22 offering, she enlisted the creative industry’s coolest figureheads to star in an 00s reality TV spoof, The Collinas. With Tommy Dorfman playing the air-headed lead, a supporting cast was made up of Aaron Philip, Chloe Wise, Jazzelle Zanaughtti, and Marni designer Francesco Risso, among others. But perhaps the Marni and Collina Strada worlds were always in orbit of each other, with both labels serving fashion’s community of crafty clowns.