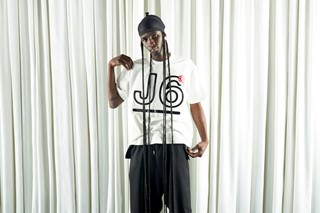 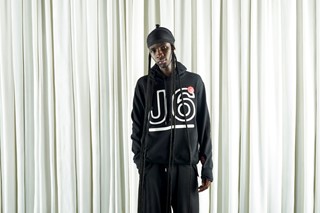 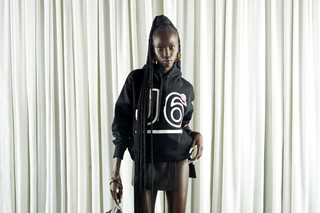 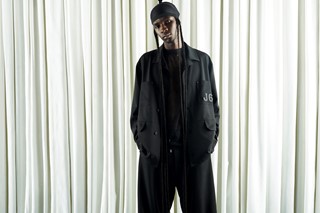 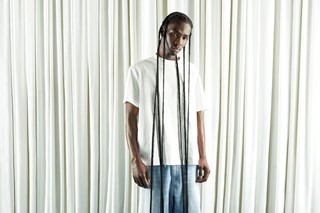 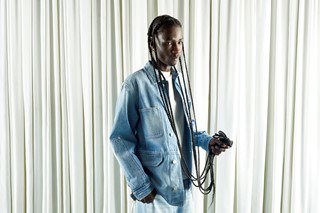 Every so often a video emerges on the timeline of a long-legged woman dropping from the balcony of an auditorium. As she straddles the metal railing, she descends limb-by-limb, contorting her body in slow motion as if she were a stick-insect removing itself from the branches of a tree. Another video sees the same woman wielding a can of air freshener, encircling herself in its smoke like a matador summoning a bull. Her name was Daesja Mizarahi LaPerla Jourdan and not only was she a foundational figure on the New York ballroom scene, she laid the blueprint for James Garland’s vision of cold-blooded style.

“If you look at any of those videos her silhouette was always so model-esque. So 90s Prada. She wore those square toes with the thick block heels, the slim denim, the utilitarian tank,” says the designer, who is now based in Italy. “What I loved about those girls was the way they interpreted fashion and made it more. There’s this one video where a girl is walking ‘label’ and she’s wearing look one from one of Alexander McQueen’s Haute Couture Givenchy collections. I don’t know how she got it, where she got it, if she borrowed it, if she stole it, but it blew my mind.” These women, including Lil’ Kim, Foxy Brown, and the opera singer, Leontyne Price, form the imaginary spokespersons of Garland’s first standalone fashion label – J6. “It’s a matriarchy. These women aren’t damsels in distress, they don’t need to be saved, they’re strong and own it. I’ve always gravitated towards that.”

The brand officially launched today on SSENSE and translates all the oomph of early 00s Brooklyn into the most decadent, Italian fabrications. Everything comes scooped out, unbuttoned, and shrunken, flaunting the body in fluid lines, bold cuts, and crystals. Trailing durags have been reimagined as support structures for bias-cut, backless dresses and turquoise, snakeskin skirts have been sliced at the waist to reveal just a slither of hip bone. Between all the slit skirts and knife-point stilettos, it’s hard to look at the collection without thinking of Tom Ford-era Gucci – but that’s just the point. “You didn't need to have a PhD or understand any obscure fashion references to relate to his work, you just knew it was that. It was glam. You could wear it in a club. You didn't have to have a unibrow to wear it – because, you know, sometimes fashion likes a little unibrow or a curvature on the spine – whereas I just wanted to depict the women and men I grew up looking at.”

“The brand is a love letter to my childhood,” he adds. To say that Garland had an unconventional upbringing is quite the understatement. His mother worked for the Metropolitan Opera and on weekends she would force him to write book reports on Vogue magazine – he remembers his first assignment was the March 2000 issue with Amber Valletta wearing a blood orange version of Jennifer Lopez’s Versace jungle dress. Though he was sent to ballet class and listened to Rodgers and Hammerstein, he watched the seeds of hip hop and R&B sprout through the streets of Brooklyn. He studied at Harvey Milk, which is one of the only LGBTQ+ secondary schools in the world, and from there, he met Shayne Oliver, with whom he later formed Hood By Air.

After HBA went on hiatus – and a short-lived stint as a flight attendant – Garland returned to fashion, designing accessories for Helmut Lang and Diesel under Oliver’s creative direction. But where one designer’s silhouettes are overblown and extreme, another’s are nimble and cling to the body. “When it came to designing my own collection, I knew my aesthetic. I wanted it to be that glamour girl from New York,” he says. That image was honed over the pandemic, which almost knocked the wind out of J6, as Garland spent hours rewatching archival fashion shows and music videos on YouTube. Ultimately, though, that fantasy had to become flesh and all those rappers, music video vixens, and ballroomers have come together as one in Anok Yai – one of our generation’s most sensational models and Garland’s best friend. “She loves to be sexy, she loves to show her body, her aesthetic just aligns with my world.”

Yai now fronts the designer’s debut campaign, cradling a plastic baby, as a poetic stand-in for Garland’s own mother. “She’s so strong and is exactly who she is on the runway,” he says, recalling the first time they met at Duckie Thot’s birthday dinner when it was “love at first sight”. “She was super young and new to the city so I had to walk her through certain things, like how to use a dishwasher. It’s crazy because she has this innate sense of style but she didn’t know that it came from all these people before her. So I, of course, had to show her all my videos from the early 00s.” Yai became the totemic J6 girl but she also inspired the collection itself, like all the Swarovski-strewn denim pieces, which were born from the kinds of bejewelled durags that Garland would make for her fashion week looks. “It reaffirmed that I should be a designer. This is a woman who could get anyone to make clothes for her, but she chose to wear mine.”

Before hanging up, Garland repeats that J6 should be read as a “love letter” to all of the women who have helped to shape his character. His mum, Daesja, Kim, Foxy, Leontyne, Amber, and Anok. And in turn, he forges a thank you made from cupro jersey, viscose rib, and buffed leather. The kind of clothing that changes the feel of being in your own body. Clothing that makes you walk and hold yourself differently. Clothing that transports you to Fort Greene park in Brooklyn, dancing to house music, looking sexy, and bagging a man.