Rimowa gets a Rih-brand, and Dapper Dan gets his fashion flowers 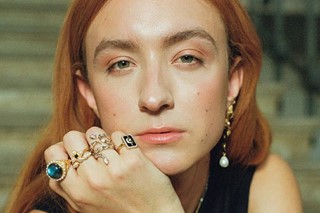 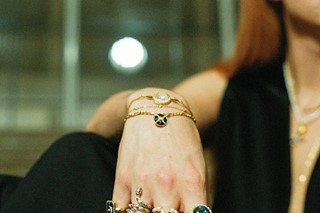 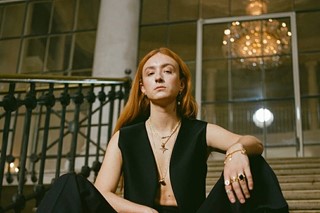 It was just a couple of days ago that British-American designer Harris Reed deified Iman Abdulmajid, quite literally crowning the boundary-breaking supermodel in a radiant, multi-layered crinoline and gold leaf gown for the Met Gala. The dress, which took 400 hours of hand-tacking and hand-embellishing to make, went beyond the night’s Americana theme to symbolise prosperity and new beginnings  – “a ray of light,” as Iman told reporters. Yet those words could just as easily have described the bedazzling rise that Reed has experienced since the model swept onto the red carpet. And now, the emerging designer is apportioning this shine to a new jewellery collaboration, which launched yesterday with Missoma.

“People kept asking me when a Harris Reed jewellery collection was coming,” they say, dialling in from New York. “I’m literally always dripping in jewellery. Even if it’s just a two dollar piece or crazy, faux Georgian items, I wear them with actual 18th century, or early 19th century pieces.” Despite knowing better, Reed never removes their jewellery, even if it makes swimming or showering a struggle. “I shouldn’t say that, it probably ruins the pieces and over time they tarnish, but that just makes them more personal, more beautiful I think”. Although Reed has never sold jewellery before, it’s always been a part of their creative process as a designer, often sketching elaborate ideas to sit alongside their collections – a star pendant here, a serpent ring there – “that embroidered, ornate sensibility is vital to what inspires my work,” they say.

Today’s capsule expands the Harris Reed mythology by way of hefty cocktail rings, celestial, occult-like bracelets, and could-be-antique earrings. “It was about making pieces that can stand alone at a party or a fabulous red carpet piece”, inspired by the designer’s jaunts across the globe – from “amazing swap meets in LA to little vintage markets in Rome when I was an apprentice at Gucci.” It was about creating pieces which stand the test of time even, hence the collection feels as though it could have been found within someone’s lifelong jewellery box. Reed clearly understands the emotional, and grounding, value of jewellery. “For me it’s a cocktail ring that I’ve worn my entire life,” they say, “it’s like falling apart and I never take it off unless it’s for work or something. My mum originally bought when she was pregnant with me in Paris, and one of the cocktail rings is very much inspired”

While much of the collection comes from literal references – Reed’s favourite piece is a hand-shaped necklace taken from the door knockers in Rome – certain iconography finds deeper resonance, too. “The collection started by looking at this specific breed of butterfly which has two genders. And we’ve heard this so much from me but I’m constantly fighting for the beauty fluidity. So that butterfly acted as a staple piece and the shaking hands are a symbol of agreeing to those terms. The swords and the daggers are about fighting for who you are and snakes represent a shedding of skin – whether you’re coming into a new style in your life, or perhaps a new sexuality. Anything that is new.”

The rest of fashion news this week has, of course, been dominated by the Met Gala, where Billie Eilish made Oscar de la Renta terminate its use of fur, Frank Ocean babysat X AE A-XII, and Lewis Hamilton paid for emerging Black designers to attend. For anything else that may have passed you by, click through the gallery below.

Dazed’s current coverstar Rihanna has earned herself another gig this week, fronting luxury luggage label Rimowa’s major campaign. It comes as the LVMH-owned brand announces a sea change in its offering – downsizing its iconic ridged, aluminium suitcases into a coterie of handbag-worthy iterations. The billionaire mogul stars alongside Lebron James, Roger Federer, and Patti Smith, and has been pictured jigsawing suitcases into the back of New York taxis, with metallic pillbox bags strapped across her body, and clasped in her hand. Oh, to be crushed between Rihanna’s fingers!

Though Lagerfeld famously left his entire estate to his pet cat, Choupette, auction house Sotheby’s has somehow managed to wrangle a few items for itself – now staging a sale of some of the late designer’s most prized possessions, including 200 pairs of his trademark “sliving” gloves. Goyard trunks, wine goblets, art-deco furnishings, and some Choupette-china plates make up the rest of the collection. Not to mention iPhone cases and KL figurines, which, allegedly, testify to the designer’s wide-spanning appreciation of the arts. The auction goes live later this year.

Cult concept store and long time design incubator, MACHINE-A, is dropping a capsule with London brand Denim Tears, as part of its ongoing collaboration series. The collection, which consists of Union Jack jeans and crumpled rastafarian t-shirts, is said to have been inspired by the Windrush and centers the Jamaican diaspora. To coincide with the drop, which goes live today (September 17), Khalid Wildman has designed a bespoke installation to house the collection within MACHINE-A’s Soho boutique.

DAPPER DAN GETS HIS FASHION FLOWERS

The CFDA, the Council of Fashion Designers of America, announced the honorees of its 2021 award ceremony, among them Dapper Dan, who will receive the Geoffrey Beene Lifetime Achievement Award. It marks the first time that the governing body has prized a designer who has never staged a runway show. “Thank you to the CFDA for making me the first black designer to win this lifetime achievement award,” he wrote on Instagram. “Harnessing the Dapper Dan brand to Gucci mounted it on a global track, now the whole world knows what Harlem always knew, that the Dapper Dan brand is a thoroughbred brand.”

MONCLER GENIUS IS BACK

On September 25, Moncler will present the next iteration of his genius cohort, beamed digitally across five cities and hosted by Alicia Keys. JW Anderson, Craig Green, and 1017 Alyx 9SM will be making their return, while Gentle Monster is among the project’s newcomers. Coinciding with Milan Fashion Week, log onto mondogenius.moncler.com at 1pm CET to get a glimpse of the blockbuster spectacle.

The latest victim of the Institute of Digital Fashion’s captive, world-bending ploys is London designer Richard Quinn, who has collaborated with premium distillery Royal Salute on a round of collectible whiskeys for London Fashion Week. Having taken a big old swig themselves, the Matrix-looking team behind IoDF have created a VR universe in which anyone, and everyone, can take a trip though Quinn and Royal Salute’s hyperactive dreamscapes. By clicking onto an Instagram filter, users can sweep through a Richard Mosse-esque universe, where colours, time, and space itself have been inverted to hypnotic effect. It’s not just about high fashion hootch, though, IoDF are prodding at the edges of IRL experience. As co-founder Catty says: “it’s paving the way for a brighter future. It’s inclusive and democratised, anyone can attend and it has zero impact on the environment. It’s beyond the restrictions of our physical world, the possibilities are endless. Let’s start a revolution and rethink how fashion is presented.”

SWAMPGOD AND RICK OWENS ARE GETTING DARK WITH BROWNS

Oh, Venice! All chocolate box lagoons, Dolmio gondolas, and Byzantine cathedrals. Home to Vivaldi, Tintoretto, and Shylock. Scratch beneath the floating city’s gilded frescos, however and there lies a gruesome underbelly. Stinking canal systems, rotting real estate, and a crush of year-round tourists outnumbered only by the sheer number of pigeons which plague Piazza San Marco. There are 391 bridges in Venice, and every single one of them is sinking. What lies in the shadows of the city – bubbling beneath the cruise liners and clownish Carnivale masks – is what upcycler-designer Swampgod has spent the past 18 months trying to articulate. Now collaborating with fellow Venetian, Rick Owens, Browns has picked up the duo for an exclusive capsule collection of diced and spliced clothing, forged from Owen’s deadstock. Check it out here.