The London-based designer presented his second collection for the brand’s Genius project, seen via an installation that took a month to create 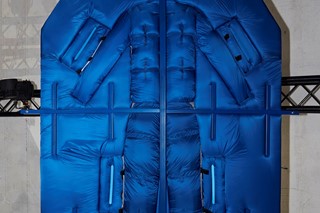 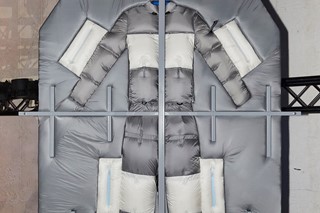 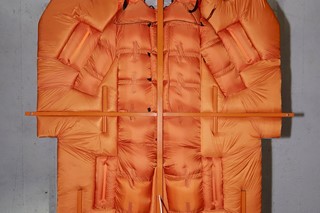 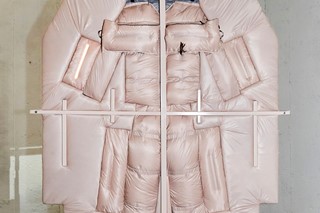 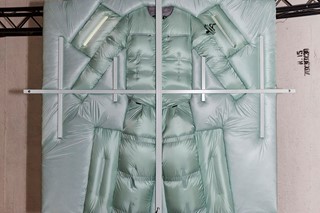 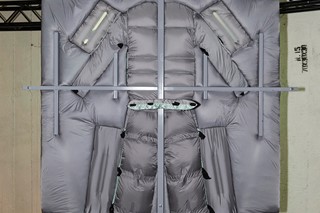 Last year, Moncler founded its Genius project, inviting a group of designers – Simone Rocha and Valentino’s Pierpaolo Piccioli among them – to reinterpret the label’s codes and show them through their own lens. This season saw the designers return for their sophomore collections, joined by Richard Quinn and Matthew Williams of 1017 Alyx 9SM. After making his Genius debut last year, Craig Green also returned.

Known for his unique way of presenting clothing through campaigns – they’ve previously featured giant latex windmills, burning sculptures and a human liferaft – Green presented the new collaboration similarly, via some new giant sculptures. The looks – styles by Dazed’s creative and fashion director Robbie Spencer – were placed on figures he described by the designer as ‘vent men’ – material-covered wooden sculptures that were clamped to the ceiling against blowing fans, leaving it billowing as they rotated. After working on creating the sculptures with London-based set designers Isabel + Helen, the final product wasn’t tested properly until the day of the show. “We were doing all of the set up live there, it took quite a while and we didn’t manage to do a full test until the morning of the show,” Green tells us. “It was very nerve-wracking, but worked in the end.”

Inspired by lightness and practicality, the AW19 looks appear to be heavy – like the oversized meme-ready looks from last time – but can be completely compacted down into small squares. Picking the lightest materials during the fabrication process, Green and his team were able to develop techniques which allow the clothes to be easily worn day-to-day by the wearer.

“Each season, we try to base it around an aspect of Moncler’s DNA or how I see Moncler as a brand. This season, it was all about the idea of lightness,” he told us about his design approach. “I’m always fascinated that with Moncler it always looks so protective and solid, but the garments themselves are often very lightweight and easy to travel with.”

While both his eponymous line and Moncler have some similar codes, Green’s approach to the collaboration differs. With his own label, Green notes that his inspiration can be found in many things, whereas his collaborations with Moncler are, “always based around protection, functionality, and technical outerwear” – celebrating the Italian brand’s sense of adventure.

Green goes on to explain why he frequently uses sculptures as a way of presenting his work for both his own label and Moncler. “It’s about making very functional, approachable garments but also trying to make creative visuals that make people think or dream,” he says. “I think that’s always important in fashion.”