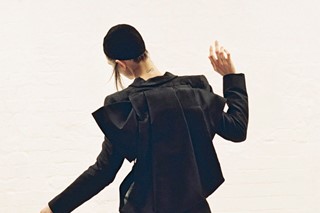 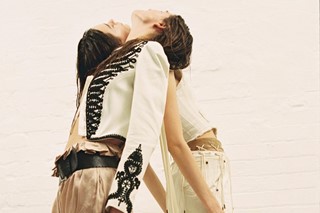 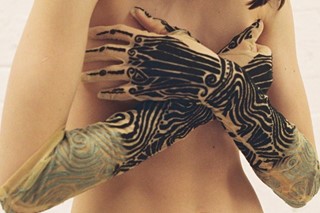 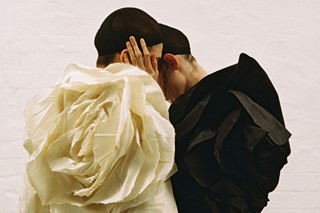 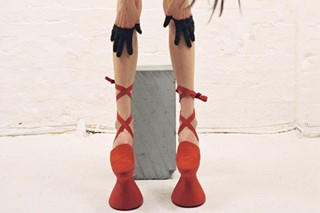 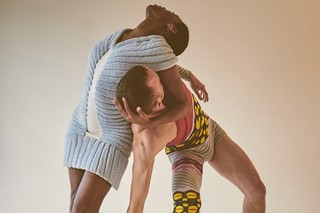 For some people, the fear of throwing things away is almost a disease – but while others hoard things they really should get rid of, designer Jennefer Osterhoudt’s collected items have become one of fashion’s biggest and most fascinating archives. And now, as part of new exhibition Inside Arc, a selection of items from her collection have gone on display at London's Fashion Space Gallery.

Including a number of rare and little-seen pieces, mostly by Alexander McQueen and John Galliano, Inside Arc showcases a series of garments and accessories that Osterhoudt amassed from her time working alongside the designers in Paris in the 90s and early 00s. With her partner in crime, stylist Nick Royal, she has extended the collection with pieces from brands such as Versace and Comme des Garçons, as well as the likes of Fecal Matter and Sorcha O’Raghallaigh.

After a brief stint at New York’s Parsons School, the designer moved to Paris where she started sneaking into fashion shows, including the John Galliano Pirate show in 1992. “Still to this day it’s the most beautiful show I ever saw,” Osterhoudt tells us. “So then I ended up begging him for an internship and I just stayed with him for four years.” Galliano quickly made her head of accessories – a title she also assumed when he took over at Givenchy in 1995 where the pair spent long days and nights working together. “He just made me laugh all the time, he was always joking, he was always dressing up in funny clothes,” she remembers. “He used to wear my high heels and hoover the floor, and then put on a turban and sing.”

While still at Givenchy, Osterhoudt met McQueen who took the reins of the house in 1996 and asked her to stay on as the head of accessories. The atmosphere in the studio was almost the same as with her former mentor – hard work with a soupçon of funny games.

Vintage and rare antiques that Osterhoudt found around Paris also provided a common inspiration for the two designers, with many of these treasures the source of The Arc's vast archive. Also showcased are Haute Couture pieces and garments saved from the bin after fittings. The archive is still growing, though, as designer friends of Osterhoudt and Royal donate their own collections that are then lent to established stylists and designers for photoshoots and campaigns.

Inside Arc gathers only 25 pieces of a testimony that spans over more than two decades but it’s a way to keep the past pretty much alive. “All of this was in Paris in storage for 15 years just sitting there, and I felt like that was a crime because the 90s were so beautiful,” said Osterhoudt. “I’m just so happy that it’s out there being photographed all the time now.”

Here, the designer talks us through some of her favourite items from the exhibition.

Tuxedo/Kimono, John Galliano for Givenchy Haute Couture – The Princess and the Pea, SS96

“That’s a haute couture jacket from Givenchy with the obi [belt] on the back, and I love that one because my dog was actually in that show. Lee [McQueen] loved my dog and he used him as an accessory. It was supposed to be a village and every person played a role – every model was a different person in the village – so one person was a Hollywood star, it was Shirley Mallmann, and then she had to have my dog. So my dog was on television all over France and he was almost famous. And then the couture buyers tried to buy him and I said no.“

“I love this jacket, it’s called the Poodle jacket, and it was incredibly difficult to make – it’s more Haute Couture than ready-to-wear but technically it’s ready-to-wear because John Galliano didn’t have Haute Couture. There’s 400 metres of gathered chiffons to make those ruffles, and it took the technician a week to make it. And usually they’re such good technicians that they can make a beautiful jacket in a day, but that’s so special it took forever. And there was only four or five produced and I bought one. So that’s quite special for me, that piece.”

“This is a beautiful piece, it’s a McQueen from the Dallas Cowgirl Givenchy show. Everything was kind of western themed but all the beads are antique and I found a lot of them from Fried Frères and from the flea market in Paris because we used to buy a lot of things there for trimmings, and buttons. Galliano and McQueen, both of them, loved vintage trimmings and antique things from the flea market. In Paris it’s the best. Clignancourt? I love it.”

“This is really special. When I was working at McQueen, I had my little accessory desk in the middle of the room and I saw them working out this technique, and later it became the Oyster dress. McQueen started to use this technique a lot but this was kind of the first test to find the technique, and again, it was in the garbage so I took it out. I think the first time he used it was the Pirate show in 2003 and that’s when I got it.”

“This is for the McQueen show that happened in a church and it started out with the girls wearing a lavender leather Red Riding Hood cape but it was lilac with lilac thigh-high boots and she had real wolves – she ran through a gothic cathedral with five wolves, and that was the beginning of the show. So for us, we just called it the School show because it was based on school uniforms, but then we called it Mary Poppins, and in the end the show was called Supercalifragilisticexpialidocious officially. And we didn’t know it, but Lee was working with Tim Burton to do this invitation: he had Tim Burton illustrate this little booklet and that was the invitation.”

“This is my treasured horse-teeth necklace. I find one every ten years only, it’s so hard to find them. So the first one I had, John took it and he wore it every single day until every day another tooth fell out, [and] until there were only two teeth left. And then I found another one so I’m ok.”

Inside Arc is now open until July 28 at Fashion Space Gallery.