The AW18 collection tapped into a bygone couture elegance 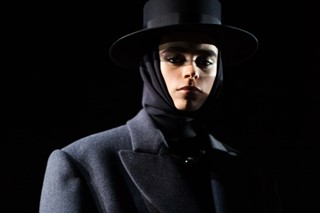 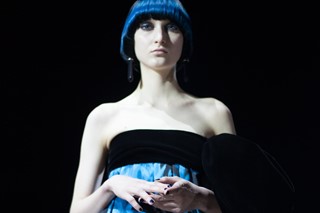 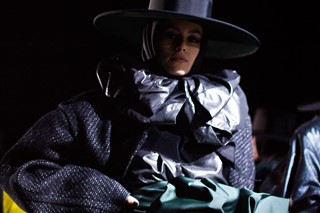 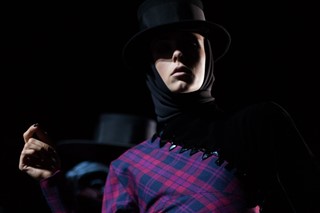 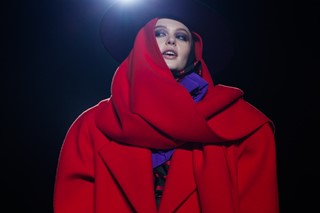 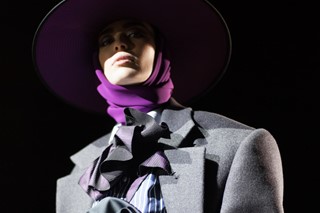 Approaching the Park Armoury before the Marc Jacobs show, one could hear the incensed swell of protestors, whose chants echoed and ricocheted down Lexington Avenue. It’s a familiar sound in New York and an expected one yesterday, a day in which one of the deadliest school shootings in the US (and 18th this year) occurred in Parkland, Florida, reigniting calls for gun control amid Republican prayers in the place of action. We should all be outraged: surely an anti-gun march was well underway. However, upon closer proximity the chants were revealed to be those of PETA activists, protesting the use of fur in Jacobs’ fashion collections. “Disgusting, fur hag!” screamed one demonstrator, covered in fake blood, in the direction of a woman in a faux fur jacket. The evening was off to a theatrical start and it certainly didn’t end there.

Marc Jacobs is one of fashion’s most beloved showmen, and for his AW18 runway he delivered a grand slam of high drama with simplicity and impact. Here’s what went down.

MARC’S MUSES – AND CARDI B – WERE FRONT AND CENTER

As guests filed into the dark space, a narrow strip of runway lit from above, photographers clamored to catch the hob-nobbing taking place in the center of the room. Many of Jacobs’s favorite women, like Sofia Coppola, Christina Ricci, and Karen Elson came to see the show. Jacobs’ boyfriend, Char DeFrancesco, wore matching day-glo leather jackets with a friend, and held court in the middle, vaping and laughing with Lil Kim. Raf Simons was delighted when he realised he was seated next to Debbie Harry and reverently introduced himself, shaking her hand. After everyone had finally taken their seats, Cardi B was escorted the full length of the runway to her spot on the other side of DeFrancesco, a last-minute manoeuver usually reserved for the most famous diva in the room – Kim Kardashian, Lady Gaga, or Kanye West have been subject to this move at other shows in seasons past. When the Bronx-born rapper finally took her seat at New York’s final fashion show, it felt like a coronation: Cardi B officially won the week.

THE SET WAS STRIPPED BACK AND QUIET

Jacobs is known to wax and wane when it comes to show production, opting either for something enormous and dazzling, or something stark and simple, courtesy of the masterful staging director Stefan Beckman. This season, he went for the latter, to stunning effect: two rows of seats lined either side of a narrow runway. As each model passed, they were lit with spotlights from the back and the front, each beam following their strut for the entire length of the runway. The effect was heightened and dramatic, like scenes from a surreal Hollywood noir, each look casting delicately long shadows that cascaded off the wide-brimmed hats and enormous shoulders of the garments.

... BUT THE COLLECTION WAS AT MAXIMUM VOLUME

As for the collection, Jacobs drew on tropes of 1980s extravagance – think Claude Montana, Emanuel Ungaro, and Yves Saint Laurent – and ballooned silhouettes to comic book proportions in deluxe fabrics like double-faced cashmeres, flocked taffetas, radzimir, velvet, and warped-print satins. Leather trousers were drowned in decadent wrap coats. Skirts came with backward trains that formed bustles in the shape of giant rosettes. Collarbones were swaddled in parcels of taffeta. Many looks carried lavishly chubby fur stoles. Even the sportier dresses were lacerated with diagonal seams lined with crystal beads. With linebacker shoulders and nipped waists, either in severe wide-brim black hats or with geometric bobs and pixie bowl cuts, the women appeared powerful and rather sinister, like characters out of Warren Beatty’s Dick Tracy – less Madonna, more Pacino. The overall effect was that of an outsize glamour that called back to a more ostentatious time in fashion – a bygone couture elegance. It was certainly audacious and breathed a last gasp of capital-G Glam into a humdrum New York Fashion Week. Given reports of Jacobs’ current business woes, it felt like an act of defiance more than an acquiescence to Trump Republicanism, and just like the sort of provocation Jacobs does best.