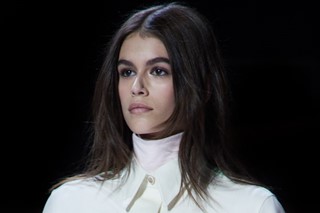 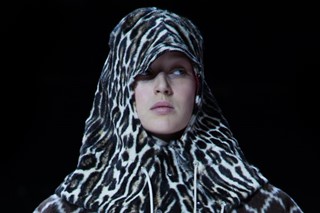 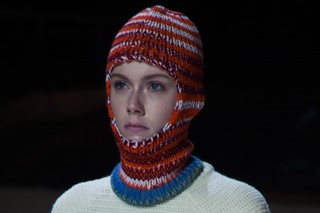 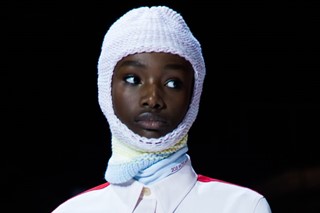 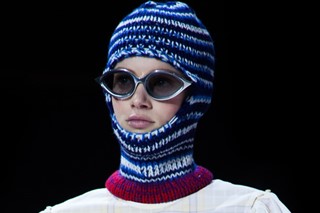 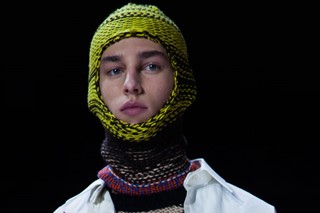 It’s been one year since Raf Simons and his team showed their debut collection for Calvin Klein, and what a year it’s been. When he accepted the job as chief creative officer at the behemothic American brand, he had no idea that America itself would become an unrecognisable landscape of political horrors in less than 12 months – how could he have? Yet his debut collection exhibited a sense of dystopian, deranged glamour that read as an outsider’s impression of this country’s particularly menacing obsession with consumerism and ongoing love affair with denial. Or perhaps that’s just one way to read into what is intended as a sincere embrace of American hagiography. Maybe it’s best to look at things from both sides. In his first three seasons, Simons has channelled tropes of Americana into kaleidoscopic collections that flirt with celluloid hallucinations of national splendor while poking holes in our ideas of what constitutes tradition. At last night’s show, located at the former American Stock Exchange, he went bigger and bolder, building that story into something steroidal and sublime. Here’s what went down.

THE SPACE WAS FILLED WITH POPCORN

When Calvin Klein sent out invitations – silver screenprinted bags of popcorn – we knew we were in for a show. What we didn’t know was that the space would be filled with massive truckloads of popcorn. From corner to corner, the colossal trading room was blanketed in about two feet of bloomed kernels, which showgoers had to wade through in order to find their seats. By the end of the show, everybody was coated in a layer of edible dandruff. When I got home, I was pouring it out of my shoes. The set – a massive reconstruction of the barns seen in this season’s Willy Vanderperre-lensed campaign, covered in Warhol prints and embellished with Sterling Ruby pom pom sculptures – provided Simons with his biggest scale to date. Clearly, this season was all about going big.

In an attempt to connect the settling of America with the 1950s space race and today’s information boon, Simons invoked astronauts with oversized white rubber boots and silver gloves, and mylar-inspired lingerie. Mining the high-vis details from municipal uniforms – think electricians, firefighters, and parolees – he put reflective 3M and safety orange strips that popped out beneath semi-sheer prairie dresses and along the hems of industrial workman’s jackets. Knit balaclavas and sweaters featuring Wile E. Coyote and the Roadrunner offset oversized hazmat boots, and the cowboy-inspired button-downs and slim trousers with racing stripes, of seasons past, came back in supple, shiny finishes that may have been leather but resembled the texture of rubber.

“It was easy to see these revamped American classics as uniforms for the apocalypse – a smash and grab of utility, history, necessity, colors, and pop icons”

He took prairie settlers and astronauts, Laura Ashley and Looney Tunes, and put them into a socially blind blender that managed to elevate blue collar workwear to the stratum of red carpet opulence. The effect was that of a new survivalism: as models trudged through the popcorn fields in boots suitable for a post-nuclear winter, with certain abstract knit patterns resembling frozen glitches from static TVs, it was easy to see these revamped American classics as uniforms for the apocalypse – a smash and grab of utility, history, necessity, colors, and pop icons – the better to remember how we got into this mess to begin with.

WAS IT A META MESSAGE ABOUT HOLLYWOOD?

Echoing the Bowie refrain from his first Calvin Klein collection (“this is not America”), Simons’s show soundtrack, by Michel Gaubert and Ryan Aguilar, spliced together Simon & Garfunkel and The Mamas and the Papas with low, guttural bass tones and spoken vocals that could have skewed either as the monster from Cloverfield or Twin Peaks’s Man From Another Place. Packing the front row with Hollywood’s A-List – stars of Big Little Lies mingled with the cast of Marvel’s The Black Panther, on track to be the biggest opening weekend for a Marvel movie to date. Simons turned the night’s popcorn motif into a rather meta statement on our contemporary fascination with fear – as models came out, clutching bags of movie theater popcorn alongside their swingy Calvin bags, it felt like they were watching us, from the eye of the storm. While Hollywood is certainly a major strand in our American fabric, the message felt much louder and more caustic than that. As we find ourselves barreling down the tunnel of a crisis of conscience, as lies become faith and truth becomes folly, the darkness at the edges of our psyches becomes centralised, and the more we can’t seem to tear our captive eyes away from the chaos. An entertainer became a politician and now politics are entertainment. And Simons, sending out his most radiant and compelling Calvin Klein collection to date, is giving us a dress code to watch the world burn.