The curators of a new exhibition discuss the garage scene, its renaissance and why the freshness of your Moschino was a reflection of your masculinity 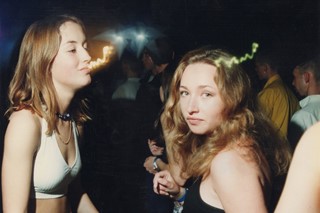 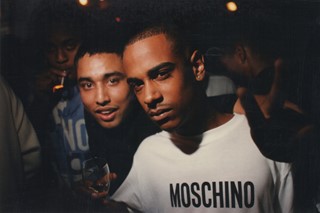 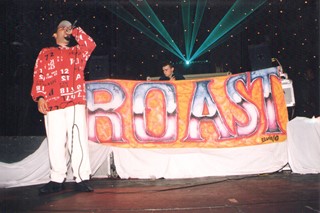 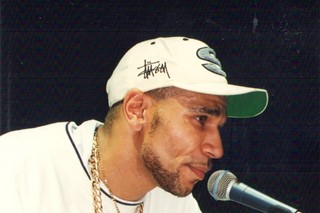 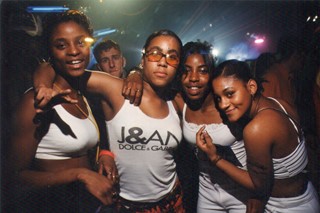 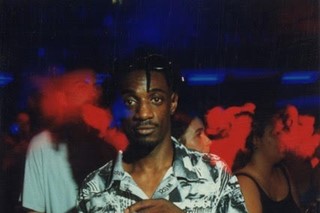 “The 80s for my mob was about football terraces and Sergio Tacchini, Fila and Cerruti. Then the 90s and rave culture came in with its own twist on Italian brands, as Versace and Moschino led the charge. Even those Italian fashion houses weren’t ready for how cool we made ‘em look,” says Goldie of the jungle scene of the late 90s.

His words (as well as those of others who pioneered the genre’s sound – as well as that of garage, a few years later) appear as part of a new exhibition Super Sharp, which opens today at London’s Fashion Space Gallery.

The brainchild of Chase & Status’s Saul Milton and archivist and curator Tory Turk, Super Sharp offers a unique insight into the development of the movement that defined a generation in the late 90s and early 00s. Where jungle was at times dark, heavy and intense, garage’s emergence from its shadow offered something more hopeful and optimistic. “The garage scene brought with it a lot more women,” says Turk. “The music, with those strong but sweet female vocals layered over the beats were quite soulful and glamorous.”

While the sound was of course hugely important, the fashion spawned by the movement was just as integral to the scene, as full looks from Moschino, Iceberg, D&G, and Gucci – usually featuring bold logo motifs and accessorised with a chilled glass of champagne – became de rigeur amongst devoted disciples; Milton himself included.

With a personal archive of more than 1000 original garments, the exhibition is centred around a selection, as he and Turk present an edit of some of their favourites – including a three-piece Moschino suit with logo detailing throughout, bold printed shirts, and a host of blinging accessories. Though Milton has tried out other looks (“I dabbled with Fred Perry, Ben Sherman and trilby hats for a while” he laughs), it’s always his 90s roots he returns to. “My style now is very similar to how it was back then. I love the same designers as I always did, Moschino, Gucci and so on. I’m still in my Classics and a neat tracksuit from Ralph Lauren or Reebok most days. Gold chains, rings, watches – I love it all,” he tells us.

The exhibition is a timely one, too, as garage enjoys an ongoing renaissance amongst a new generation of fans, throwback nights spring up across the UK, and the likes of Wavey Garms struggle to keep up with the demand for OG garments from the genre’s heyday. It’s also but a sneak peak at what’s coming later in the year, when, as part of ongoing series Return II Jungle, Milton will delve back into his archive to put over 1000 pieces on show, as part of a curated edit offering a definitive look at the visual identity of garage.

Before Super Sharp opened, we sat down with Milton and Turk to discuss the exhibition, garage style and the scene; then vs. now.

How did you guys meet?

Tory Turk: Saul and I met in 2014. I did an exhibition on street style, and basically it explored different subcultures and tribal styles; we got a group of creatives from different subcultures to style mannequins. So, for example, Skepta styled the grime mannequin, Cass Pennant the casual mannequin, Chris & Anthony Donnelly the Manchester mannequin and Saul styled the jungle and garage one. Both of his were styled in head-to-toe Moschino, and it was at that point he told me he had an archive of over 1000 pieces from the brand.

That’s quite an archive…

Tory Turk: I know! So I told him I’d love to do an exhibition, and kind of introduced him to the idea of these pieces being an interesting subject matter for one. He loved the idea, and we started talking about it and formulating a plan. That was three years ago.

Saul Milton: We felt like now was a good time to do it, to celebrate 15 years of Chase and Status and look back at that time.

So how many pieces feature in Super Sharp, and how did you narrow it down?

Tory Turk: So there are going to be around 1000 pieces on display later this year, but for this smaller show, that starts this week, we’re just featuring duplicates from Saul’s collection. This part was fairly easy.

What are your favourite pieces from the collection?

Saul Milton: There’s too many to mention, it would be like choosing between your children! One that stands out is the simple Moschino three-piece set with the full-on fade print all over it. It’s so iconic and seeing it takes me straight back to ‘97 and how I felt back then. I actually remember getting my first Moschino shirt and walking into Moondance at Bagley’s wearing it, and realising I wanted to do nothing more than DJ jungle in clubs. It was like an awakening, an epiphany that changed everything.

“The vibe in the jungle club was a lot more boisterous, quite male-dominated. When it came to the garage scene, it was a lot more soulful, there were a lot more women on the scene” – Tory Turk

What was the vibe in the clubs like back then?

Tory Turk: What’s important to note is that the vibe was different in jungle raves to garage raves. The vibe in the jungle club was a lot more boisterous, quite male-dominated. When it came to the garage scene, it was a lot more soulful, there were a lot more women on the scene. There’s actually an entire section of the exhibition called ‘Bravado’, which features about 50 photographs from a photographer called Tristan O’Neill, who took photos in jungle raves for a magazine called Eternity. They show all this boisterous activity that really made up the scene - you really get a flavour of this sweaty environment and the people in it.

Why do you think the garage and jungle scene is enjoying a renaissance at the moment?

Saul Milton: I don’t think jungle, drum & bass and garage ever really went away, we’ve been busier than ever for years. It’s one of those scenes that has its moment in the sun for a bit and then returns to the underground – but it’s always there. What’s really interesting to me though is how the next generation of fans have been searching out garage and jungle from the 90s – the music, the clothes, the style – and putting their own spin on it. We’re living in a time that has quite a lot of similarities to the early-mid 90s; uncertainty about the future, distrust of the government, social unrest etc. In times like these, great music is made, and fashion goes hand in hand with that.

How has the scene changed in the last 20 years?

Tory Turk: This time around is quite different, at least when it comes to clothes because it’s more about seeking out vintage designer garments. If you were buying Moschino or Versace back then, you definitely wouldn’t be seen dead wearing second hand stuff, you’d actually keep the tags on. One thing I think is very similar is the attitude you need to be part of the scene. You have to be pretty brave to wear head-to-toe prints and logos, the look appeals to a certain type of person. So definitely one thing that’s pretty much the same is this attitude and this flamboyancy that was present both then and now.

It’s quite surprising how flamboyant it was, given how male-dominated the scene was back then.

Tory Turk: Yeah, it is. And it was more the guys that would wear the head-to-toe looks. The girls might wear the trousers or a top, but it was usually the men who could afford the outfits. The girls would be wearing the repeat-print garments, but there was a lot more option to be wearing the high street versions, the Kookai stuff, the Morgan stuff. That was more acceptable amongst women. The men had to wear the original Italian designer brands. To be spending such a proportional amount of money on clothes showed dedication and what you’d sacrificed to show you were a member of the tribe.

What does this first exhibition have in store for us?

Tory Turk: So there’s about 20 pieces, a soundtrack that’s been created for the space, and testimonials from people who were there at the time as well. We’re stripping away all the information that’s online about the scene, you know, archive footage and things like that, and making people work a bit harder to visualise what it was like to actually be there. Back then you had to work to find the best raves. This will make you do the same. But it will be worth it!