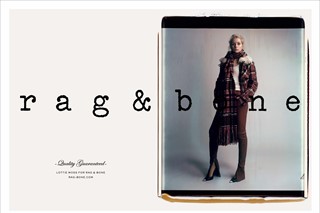 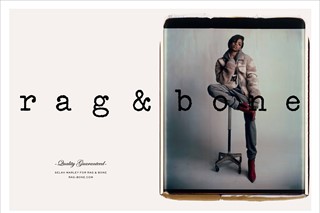 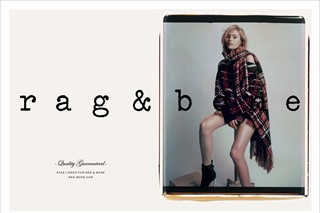 rag & bone is reinventing the traditional ad campaign. A few days ago, the New York brand unveiled more of its ongoing photo project – a series spotlighting talents who embody the brand’s spirit – adding 70 more portraits to the already existing campaigns starring Binx Walton and most recently, The Girl on the Train actress Haley Bennett.

The images were shot again by famous fashion photographer Glen Luchford, teaming up this time with past Dazed 100 image-maker Frank Lebon who created the large 20x24 polaroid portraits. Picked for their part in rag & bone over the years, these photos feature a range of creatives – including top model Amber Valletta, newer faces like Lottie Moss and Selah Marley, and influencers like Man Repeller’s Leandra Medine. Other faces include musician/model Staz Lindes, and American actress Jaimie Alexander.

CEO and founder of rag & bone Marcus Wainwright described the project as a real “labour of love” released in time for the brand’s 15th birthday. Not only a toast to Wainwright’s success over the years, it was a way of “celebrating those who inspire us and allowing them to express their individuality through rag & bone clothing.” Giving each a chance to style themselves, this kind of organic expression of identity is at the heart of Wainwright’s idea of the brand: “It was pretty amazing to see how it all came together. This kind of true collaboration is something inherent to the world of rag & bone; you never know what the result will be, but when we work with such incredible people, it is generally very rewarding.”

In addition to all the portraits, there is also behind-the-scenes action filmed by Buffalo contributor and father to Frank – Mark Lebon. Adding a film dimension to the ongoing rag & bone Photo Project, he collaged Luchford and his son’s campaign photos over film of the rag & bone “friends and family” doing random things like trying to speak Japanese.

Watch the video below and see more campaign images above.