Ava Nirui and Alex Lee create a collection of darkly humorous and subtly politicised Nike shoes, complete with their own fantasy ads 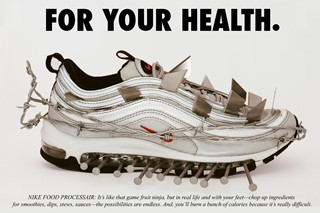 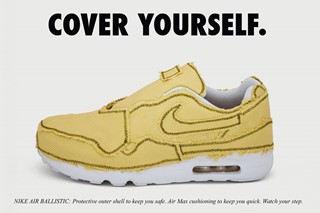 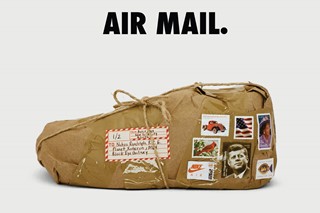 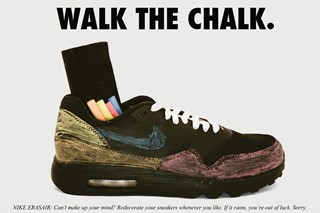 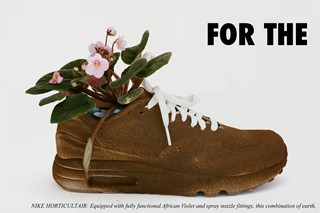 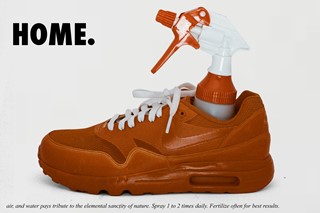 Since her coveted high-fashion iterations of everyday items first began appearing on Instagram last year, Ava Nirui’s work has continually, and often brilliantly, dealt with the interplay between fashion, art and commerce. From inhalers emblazoned with the iconic Louis Vuitton monogram to Prada branded basketballs, her work has typically been unsanctioned by the fashion labels whose iconography she borrows and subsequently subverts.

This week, however, Nirui, along with fellow collaborator Alex Lee, has teamed up with Nike for a New York-based exhibition that sees the duo’s fashion-infused art appear with the full blessing of the sportswear brand. Having previously worked together on a project which saw dolls reimagined in 2016’s most unforgettable fashion pieces, this time Nirui and Lee reimagined a series of Nike’s most iconic sneaker styles, embellishing each one with everything from bulletproof Kevlar to household cleaning products. To accompany each sneaker, the pair have also created mock advertisements, all delivered in Nike’s punchy, iconic style.

Between the eight shoes created for this exhibition, there is a diverse array of influences; there’s an Air Max that acts as a play of words of ‘Air Mail’ (in a style that references fellow New York artist and Nike collaborator Tom Sachs), but also the altogether more sobering Air Max 97, which has been fitted with razor blades, stainless steel nails and barbed wire – unofficially labeled a “self defence” shoe. Fun but not frivolous, when taken as a whole, the series strikes a balance between a world gripped by political and social strife, but also the need for the occasional distraction from it all. As it turns out, a Barbie sat inside a remote-control sneaker on wheels provides just that.

Here, we speak to Nirui and Lee about blending fashion and art, working with Nike and why they put a Barbie inside a gold-painted Air Max 95.

First off, when did you guys start working together?

Ava Nirui: Alex and I have known each other for about three years, and have always shared a similar mindset on fashion. Our first project together was a year ago, where we made Barbie outfits based on runway designs of gender fluid labels. That project kind of fueled our interest in creating ‘imagined products’ or one-off/custom items.

“If you're going to make things, they should probably say something meaningful. Especially now, with what's going on in the US and abroad, it feels irresponsible to have an opportunity like this and not use it to touch on important issues.” – Alex Lee

Can you explain how this project came about and what the process was like for putting it together?

Ava Nirui: I had met with Nike a year or so ago after I started customising Air Force 1's and sharing images of them online. We had talked about doing a project together a few times, but we didn't have an opportunity to until recently when they reached out to me about doing an installation for this year's Air Max Day. When I was asked to work on this project, I really wanted to involve Alex, as he has a very unique point of view and is passionate about ‘messaging’ behind art and fashion. We spoke about what we wanted to get out of this as a whole, and we agreed that race and unity are ideas that are important to touch on. We also loved the idea of incorporating ‘dated technology’ or reverse-innovation in some way, since the theme for the event is innovation. We wanted there to be a balance of lighthearted pieces and sneakers that had some cultural significance or purpose.

Ava, your past work has revolved around re-working iconography within fashion, but typically in an unofficial capacity. How did working with Nike compare to past projects?

Ava Nirui: There are many commonalities between this project and projects I have done in the past, particularly the concept of multiple messages and/or functions. I've always been interested in the concept of repurposing/recycling and recontextualising something to skew its purpose and value. I treat clothes/shoes as art pieces – everything I make is one-of-a-kind and not for sale. Working with Nike was amazing... They were really open to our ideas and embraced our weird/humorous concepts. Steph from Nike, who helped us organise the whole thing, was such an amazing supporter and helped us push our ideas through and make them a reality.

Each shoe varies quite a lot in terms of theme or inspiration. Is there a thread that links each shoe together, or should they simply be considered as stand-alone pieces?

Alex Lee: I think the shoes fit neatly into two distinct groups – some that are clever and fun, for the sake of being clever and fun, and some that are clever but with a greater sense of meaning and purpose. That being said, I think each shoe does stand on its own quite well. Had we made 20 pairs, the story would have been the same – just a bunch of good, unique ideas applied to a bunch of sneakers.

I want to talk about the ‘Air Mail’ shoe. You mentioned that it was inspired by Tom Sachs, who you seem to share a lot of working methods and traits with, particularly in relation to the idea of authenticity. What is it about that theme that holds such an attraction for you?

Ava Nirui: Tom Sachs is a huge inspiration in every sense. His ability to create something out of essentially nothing is astounding and of course, his references are very in line with what we have created for this project. The Air Mail shoe toys with the idea of the unknown. The notion of mystery is really interesting. I think that’s the entire message behind the “Air Mail” concept and I think creating a sense of uncertainty is kind of cool and sadistic in a way. There could actually be anything at all under that brown paper, and no one will ever know... except us.

Alex Lee: For me, I feel that the Air Mail shoe was inspired by Tom Sachs, but only subconsciously. It wasn't until after we had fleshed out the idea that we realised ‘this is very Tom Sachs of us.’ But there's no denying he has affected our ways of thinking, big or small, and has impacted how a lot of people view objects.

There are a lot of political undertones in these various sneakers. Is it hard to separate the current political climate in the US and your work?

Alex Lee: I think it's both hard not to touch on the political climate, but also important to address it whenever you can. We like to do it in ways that are sometimes subtle or less direct, but we still both agree that if you're going to make things, they should probably say something meaningful. Especially now, with what's going on in the US and abroad, it feels irresponsible to have an opportunity like this and not use it to touch on important issues. I strongly believe that art should be a reflection of the times.

Ava Nirui: We don't like to be too direct with our messaging, but rather, open it up to whoever's viewing the piece. Of course, some of our pieces allude to something that may be happening in the world right now, but we don't believe in shoving our opinions down people's throats. All the messaging is super cryptic. If you get it, you get it and if you don't, move on.

And yet, with a lot of these shoes, there’s also an element of humour. How important was that in terms of balancing serious issues with something that’s still, essentially, fun?

Alex Lee: Very important. It's how we work, and how we think. Ava and I share a sense of dark humour – and a commitment to not taking anything too seriously. Something we really kept in mind while working on the project was the balance of seriousness and fun. After all, when you boil it down to its elements, it's a bunch of Nike sneakers. Even when working on the fake ads, we wanted to keep things punchy and fun, like classic Air Max ads. That mix of urgency, lightheartedness, and attitude is essential. It keeps things hopeful.

It’s also really interesting how this exhibition takes into account the idea of advertising and Nike’s history of amazing copywriting. With both you guys being writers, did that aspect come quite naturally?

Alex Lee: That part may have been the most fun for me – channelling the badass, in your face, but still weirdly poetic nature of Nike's old ads. It's exciting to mix product design, photography, and writing, and I think those elements combine to make something even more impactful.

Ava Nirui: I went through a phase of becoming extremely obsessed with old Nike ads and the super cheeky language used. It was so refreshingly blunt and super distinctive. We really wanted to channel that funny/dry verbiage with our ads. There's so much amazing Nike material out there and we had lots to reference.

I found this insane editorial in an early 2000's issue of Dazed called “Nikephiliac” which featured different artist interpretations of Nike culture, and that was extremely fascinating. The brands mean something different to everyone. The cool thing about doing a project for Nike is all the history that you can draw on. Nike have always been such pioneers, and we found their marketing archive to be really inspiring.

Finally, do you have a favourite piece in this collection?

Ava Nirui: I love the Kevlar one, I think it's a totally new concept and there's a cartoonish quality to the appearance that I like. I also love the Barbie in the remote control car. The car is fun to play with and honestly, kind of ridiculous.

Alex Lee: Concept-wise, the Air Mail sneakers. But my favourite in terms of appearance is the Air Foodprocessair. Danger is attractive, I guess, haha.