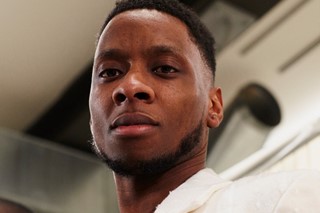 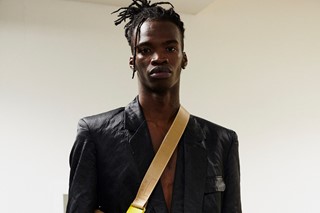 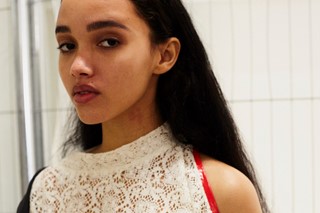 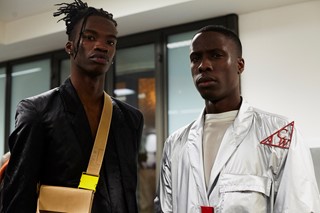 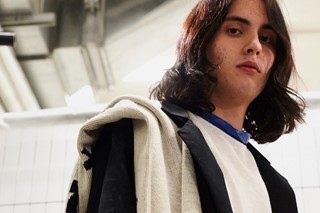 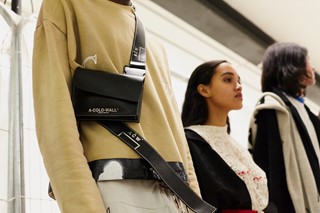 A-COLD-WALL designer Samuel Ross is talking about model agencies. It’s a few days before the young Londoner is set to debut at the capital’s men’s fashion week, and he has been considering casting. “They keep sending me guys that don’t look like they’re from ends!” he complains jokingly, perched on a step in his London studio. It’s a throwaway comment, but one that doubles as a real reminder of Ross’s unusual position: as a black man who has come up through Britain’s council estates, and who is today poised to become one of the most interesting emerging talents working in the famously undiverse, elitist fashion industry.

It may sound like a strong statement, but in just a few short years, Ross has gone from hand-dyeing t-shirts in his mum’s house to flying to New York to install a solo window display for his label at historic retailer Barney’s (as well as turning over a casual six-figure sum through his own e-commerce in the last year alone). Add in his creative direction and consulting work, and his website boasts an intimidating list of influential clients and collaborators – from hugely influential rap artists to sportswear giants like Nike and Adidas, and other successful clothing companies like Hood By Air. He’s achieved this without taking the traditional route to fashion success – instead, he trained as a graphic designer before finding an early mentor in the similarly polymathic Virgil Abloh, going on to work with him on his label Off-White.

This association, as well as a journalistic imperative for snappy language, has quickly seen A-COLD-WALL labelled as a ‘streetwear’ brand. It’s an easy box to put them in – after all, many of the hoodies and graphic t-shirts Ross has created until this point have fit into that category when it comes to silhouettes. Unsurprisingly, the designer isn’t a fan of the term (and, you imagine, all the “urban” connotations it contains when in the mouth of the fashion establishment). “A-COLD-WALL’s not really streetwear, it’s a design project that has toppled into fashion,” he explains, referencing his own academic background. “If you look what streetwear is supposed to be, what it’s based on and where it’s come from, this doesn’t really fit into that.” With hand-dyed fabrics transformed into garments at a factory in Leyton, East London, he’s not exactly printing cheap runs of Gildan t-shirts – and that design project mentality extends over every aspect of the company’s intensely considered output.

In a very literal sense, though, there is an element of the street in the brand’s ethos, which has its foundations in the designer’s upbringing and an acute awareness of the country’s unique class systems. Take the name, which speaks to the feeling of rubbing your hand against a barrier – whether council house pebbledash or palatial marble, it’s a physical manifestation of the walls which divide society. Reflecting this, Ross’s fabrication has been designed to articulate architectural materials (an overcoat in tarpaulin blue, canvas which changes with age like a building might). He also seeks to delve into the social fabrics of the estates which inspired him, where cotton jersey might reference tracksuits, and floral lace feels nostalgic of grandma’s table cloths and net curtains. “Rather than just looking at the construction a council house or estate itself, I’m starting to create these case studies on people that would potentially interact with these environments, these materials,” he surmises.

In the clothes themselves, some of his references are clearly recognisable, while others are intentionally obscure. A recent scarf featured Oskar Schlemmer’s iconic 1922 face emblem, designed for Germany’s influential Bauhaus school of design, but saw the addition of tears. “Look at what the Bauhaus icon is supposed to represent – prosperity and the future,” he says, before drawing a parallel between the movement’s architecture and UK housing estates. “You can look at some of the failures of that establishment in this country – adding two tears to this face synthesises that whole story.” Similarly, the word ‘invisible’ which snaked across the scarf was a subtle interpretation of the ways which black people in the West remain systematically socially neglected, and Ross even considers a use of colour as a way of transmitting information rather than aesthetics.

“The brand’s name speaks to the feeling of rubbing your hand against a barrier – whether council house pebbledash or palatial marble, it’s a physical manifestation of the walls which divide society”

“It’s bringing those small pieces of visual language in to tell a really wide story," says Ross (who, perhaps unsurprisingly, considers a book on semiotics to be an everyday essential). Still, don’t expect his clothes to come with a handbook – “I want people to interpret things for themselves,” he asserts. “This information is all there, but let’s educate the kids that are into ‘streetwear’, but are a little bit further ahead than that.” Despite the lofty conceptualism, A-COLD-WALL occupies a middle ground between being wearable and intellectual, and has picked up a score of influential stockists including Harvey Nichols, SSENSE, KM20 and MACHINE-A. “It’s like half-retail, half-mood board, you know?” he says of his commercially-savvy mentality, admitting himself to be as much an entrepreneur as he is a designer.

Driven by the feeling that he was “trying to fit too much under one name”, a few months ago Ross announced the launch of Polythene Optics, a sister brand to A-C-W. As his main outlet’s reputation and sophistication grows, Polythene will be the go-to for the more lower priced, sportswear inspired graphic basics. This segmentation is something Ross sees as necessary for development, and is driven by an understanding that he’s working to suit different audiences. “The kid who wears the foil utility coat with the split seams and whatnot isn’t gonna wear the heavy graphic t-shirt,” he argues, lifting up a particular silver coat sample from his upcoming collection. “I know that, and I want to cater to both in a really focussed way. One is not above the other, but they are different veins in my opinion.”

Ross is also developing his offering beyond clothing – this summer at Copenhagen’s International Fashion Fair he debuted a piece of furniture, and only last week announced Concrete Objects, a new venture with designer Jobe Burns to create homewares made out of concrete, like an incense stick holder. Unsurprisingly, the inspirations are weighty – Corbusier and Charles and Ray Eames – but there’s a playful sense of experimentation, and you understand that Ross is just someone who lives to create things, to put his stamp on the world. “I’ve got this new theory, design goth,” he declares with the kind of grin you can’t help but join in with. “It’s like listening to Ryuichi Sakamoto and wearing all black and burning incense – it’s so dramatic. I think it’s going to be a thing.”

First off, though, is London Fashion Week: Men’s, which is seeing Ross rise to the challenge of a new stage. He’s pushing himself deliberately out of his comfort zone, not wishing to do the obvious thing or stay on too safe, graphic t-shirt ground. The collection he will debut tonight will mix menswear and womenswear, and feature more expensive, luxurious fabrics, including those we have certain reservations or stereotypes about – like latex and PVC. For him, not doing the obvious is an important move. “I have to test myself,” he reasons. “It would be easy just to print everything and just send it down the runway and people would be like 'Oh great, this is the new, easy-to-wear brand'. I don't wanna do that. This is the first time I've really, really been challenged.” This isn’t Ross attempting to change his work for the tastes of the establishment, though. Instead, he’s using the platform as an occasion to push himself out of his comfort zone. “It’s that feeling of when you're throwing yourself into super deep water,” he smiles. “Fuck it. We'll figure it out!”

“Damien Hirst and Alexander McQueen, those were the last working class heroes in my opinion” – Samuel Ross

Unsurprisingly, the space for his presentation will also be designed by him, and he’ll be debuting music by Cape-Town born musician Petite Noir as well as others. With his number two Ace Harper (who runs his own creative factory, HarperVision) overseeing press, there will be no seating chart either. Instead of the traditional runway show, the event is about creating an atmosphere, about grabbing people’s minds rather than just their attention spans. “My background is design as a whole rather than just fashion, so I care about the soundtrack and the lighting and the materials that are going to interject with the space as much as I do the clothes,” says Ross. He even cares about the temperature of a room – in Copenhagen, he dropped the thermostat five degrees celsius in his space so that people would physically feel a difference in atmosphere when they entered.

So, for A-COLD-WALL’s next step, the stage is just about set. “As much as the brand has been based on my experience growing up and on my youth, it’s also about pushing beyond,” says Ross. “Beyond referencing stigmas, to become a beacon for art and creative exploration, which really hasn't existed from those communities over here in a long time. Damien Hirst and Alexander McQueen – those were the last working class heroes in my opinion.” Judging by the designer’s determination and unquenchable creativity, that might not be true for much longer. 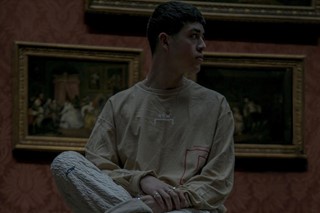 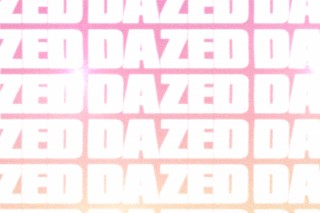 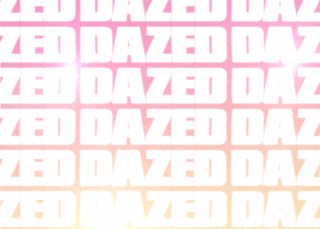 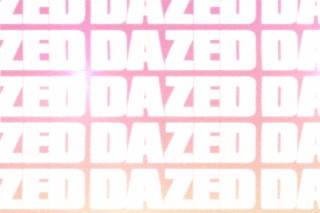 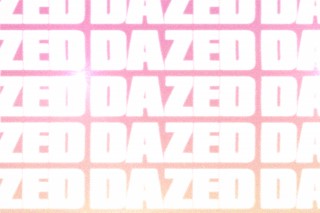 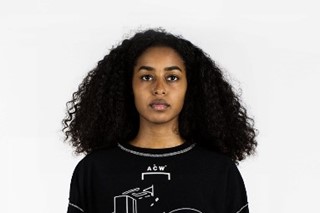