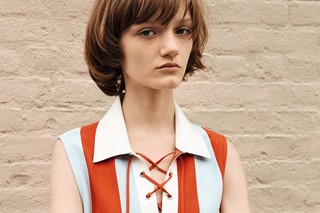 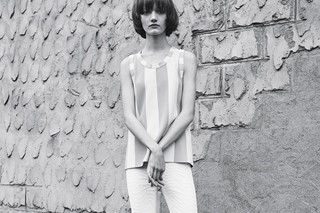 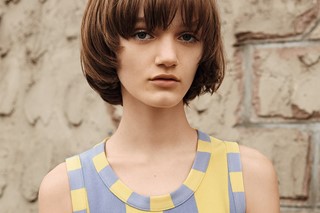 Lately, the game of musical chairs in fashion has been in full swing. As creative directors depart from their positions, fresh designers have been appointed in their stead. From Vetements’ Demna Gvsalia at Balenciaga to Bouchra Jarrar at Lanvin, there’s growing anticipation for how these designers will develop their brands. At the 43-year-old Italian house Iceberg – once a 90s hip hop favourite, which built its reputation on a rebellious marriage of sportswear and knitwear – it’s not just one creative director that’s been installed, but two. Last November, London designer James Long took the helm at the menswear line, while in June, Arthur Arbesser did the same for its womenswear division.

One of Milan’s rising young stars, Vienna-born Arbesser trained at Central Saint Martins before cutting his teeth at Giorgio Armani. Following seven years at the house, in 2013, he launched his own eponymous womenswear label, which last year reached the final shortlist for the LVMH prize. Strongly influenced by art and architecture, the tenets of his label – bold use of colour and patterns, innovative fabrics and wearable shapes – resonate with Iceberg’s own foundations, making Arbesser the perfect fit for the brand. Enlisted in time for the SS16 show season, Arbesser’s debut collection set a strong, opinionated tone, which he’s built upon for Pre-AW16 and AW16.

Three collections in, and the previously little-known Arbesser has already imbued the house with a bold reinterpretation of its DNA. Here, we speak to the creative director about the new direction in which he’s taking the brand.

STAYING TRUE TO ITS HERITAGE

Founded in 1974 as a Milanese luxury sportswear brand, “knits, colour and humour” form the backbone of Iceberg’s brand identity and are the three elements that Arbesser says he’s keen to reinvigorate. Naturally, the first thing he did when he arrived at Iceberg was delve into its archives to study the work of his predecessors, who include the likes of Jean-Charles de Castelbajac, Giambattista Valli and Marc Jacobs. The “colour, pop and energy” that permeates Iceberg’s heritage was boldly channelled into Arbesser’s first collection, marked by psychedelic stripes strewn across wearable mini knitted dresses and an eye-popping, body-hugging all-in-one that nodded to David Bowie’s glam-rock catsuits.

Silvano Gerani and Giuliana Marchini, who kickstarted Iceberg, were avid collectors of Pop Art – Andy Warhol even appeared in the brand’s campaigns of the 80s, and, more recently, artists Olaf Breuning and Rita Ackermann have served as brand ambassadors. Keeping in sync with Iceberg’s love of art, Arbesser has infused each one of his collections with artistic flavours: the Pre-AW16 collection, for example, took cues from Polish installation artist Goshka Macuga, translating her sense of irony and wit into colourful geometric prints and big-pocketed, wide-leg jeans. “I try to keep the fun factor high,” says Arbesser, ensuring that however esoteric his references may be, they’re always distilled through the brand's humorous sensibility.

“I try to keep the fun factor high” – Arthur Arbesser

TAKING ‘MADE IN ITALY’ TO THE NEXT LEVEL

Beyond keeping the “Made in Italy” label, Arbesser is also drawing on Italian culture for inspiration. “I spend quite a lot of time in the factory in Cattolica, so naturally it all feels very Italian! Most importantly it’s an Italian brand that produces everything in Italy, which really still means quality and substance,” says the designer. The AW16 collection nodded to the 60s Italian architectural collective Superstudio, famous for their graphic grid designs. In signature tongue-in-cheek style, Arbesser reinterpreted their patterns in pink faux-fur patchwork trousers and a colourful square print that came in different guises across silk shirts, ribbed dresses and knitted jumpers. Simultaneously, the collection nodded to “90s raves in the clubs of the Italian Riviera Romagnola where Iceberg is from.”

Back in the 90s, Iceberg was a fashion fixture of both the hip hop and jungle scenes. While Jay-Z’s lyrics were scattered with references to the brand (“I dipped in the stash, splurged on a chain / Now I’m Titanic, Iceberg’s the name”), his posse – like Jungle ravers – were donning t-shirts and jumpers knitted with Castelbajac’s Looney Tunes characters. For the Pre-Fall AW16 collection, Arbesser reintroduced Mickey Mouse into the Iceberg repertoire through a cashmere jumper dress and a round-neck jersey. Although Mickey didn’t reappear for AW16, the designer emphasises the collection’s “cartoon-y appeal”, and muses, “It’d be great to bring some of (the affiliation with hip hop culture) back.”