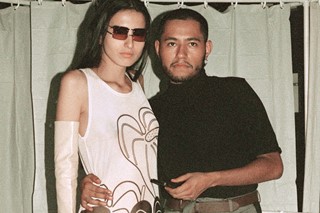 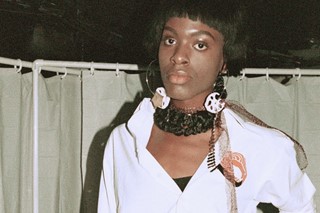 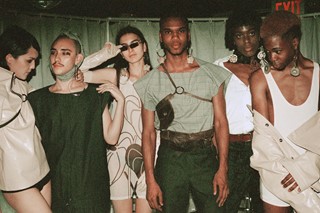 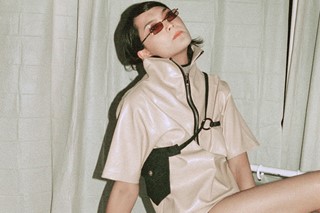 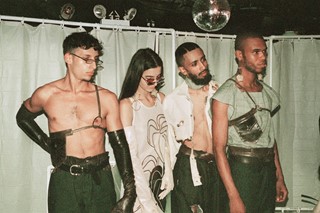 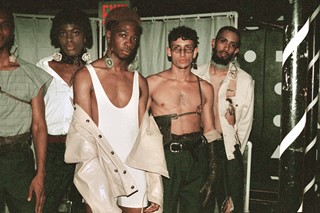 Tired journalists who still view New York Fashion Week as some sort of commercial wrecking ball for creativity just aren’t looking in the right places. Buried underneath the Givenchys and Wangs of SS16 were the fledgling young designers intent on making a real statement. 24-year-old Gogo Graham used a trans-only cast for her presentation. Then there’s 20-year-old Canadian Shan Huq, who glorifies total averageness. Also Canadian? 18-year-old Vejas Kruszewski, whose SS16 collection reworked leather and cotton basics with sensual peepholes as a comment on inhibition.

While these kids shun gap years to try and break into the industry before getting their wisdom teeth, there is one young American import whose transition to “serious fashion designer” was wholly unconventional. 23-year-old Victor Barragan started hawking garms from his online shop on Big Cartel. One of his T-shirts, a crying Leonardo DiCaprio with MS-DOS folders pouring out of his eyes as tears, became a huge seller and was a catalyst for him to take up design full-time. “It started as a stupid dream and now the brand is paying my rent, holidays and everything else,” he told us only eight months ago. “It’s part of my life now!”

Ytinifnininfinity (infinity spelled backwards then forwards) was born. And Barragan made the move from Mexico to New York to live out the American dream. In reality, though, he took his web-famous designs and developed them, effectively making the leap from the URL to a presentation on the NYFW schedule. Sure, you may not have heard of Barragan or Ytinifninfinity, but when you’re fast-tracked to fashion week with a 10,000 strong Instagram following and plenty more fans on Tumblr, you don’t have to hustle so much to get seen by the right people.

Of course, not everyone who turned up totally understood the concept. Show goers were confronted with a mix of models wearing J-Lo-sized hoops, backed by the futuristic sounds of Zakmatic. “They were pretty confused at the beginning after the music started,” Barragan confides. “When they opened the door, the audience was faced with distortion sounds in the back of a supermarket, and this deep voice talking about how big companies control the hormones in our food and what we eat everyday.”

The idea of making a comment on what we eat began with some Instagram experimentation, which then translated into accessories made out of aubergines. “I started working with food a while ago, creating still lifes, using diverse elements – like gold, diamonds and piercings,” he says. “My work on Instagram has a sense of humor; it’s always something weird but not creepy. I had this idea to make organic accessories that could feel like they were alive.”

The cast who showcased these hoops and veggies weren’t your Wonderbread regulars, either. With the help of street casting agency Lorde Inc, Barragan sourced his models from – where else? – Instagram. The diverse cast includes Insta-lebrities like @fern.ando; @mmvision33; @vagina.envy; @aurelhaizeodogbo; @marcelogutierrez; and @dirtyisrael. With them, he simply wanted to echo “exactly how life is in NYC”. Their collaboration came off swimmingly – and thank God, because “we didn’t have time for a fitting before the show so everything was sorted just a couple of minutes before.”

Underneath the veneer of subverting conventions of how a collection usually comes together, Barragan just wants people to take his work seriously. “As a fiction character Ytinifninfinity doesn’t have a gender and the clothes don’t either anymore. She’s an alter ego of Victor Barragan.” That his aubergine clutches won’t be flying off shelves anytime soon doesn’t worry him. He’s focused on the larger picture – one in which internet culture takes centre stage and anyone with an original idea can make it a reality.