Why break the bank when you can do it yourself? Four DIY designers weigh in

Taken from the winter issue of Dazed:

Logomania is having an identity crisis. The trad-and true status symbol is a shell of its former self. These days it’s all about the branding, minus the brand: the ultimate anti-status statement. The logo is familiar, but wait… is that Tupac Shakur’s name in place of the Tommy Hilfiger flag?

Far away from the catwalk in the hot climes of LA and Mexico, an up-and-coming generation of ™ devotees are establishing a new pecking order. “You look around and you’re tired of the lame clothes everyone wears,” says 22-year-old Victor Barragan, whose label YtinifninfinitY took him from the IRL sprawl of Mexico City to a Tumblr-ready audience of hungry buyers. “You wanna look different, you wanna look special! That’s why you create your own shit – you wanna show how you feel!” 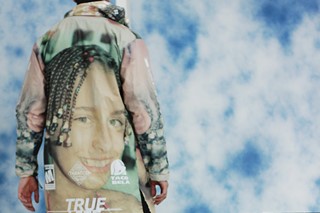 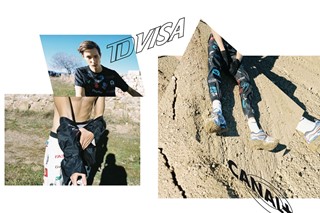 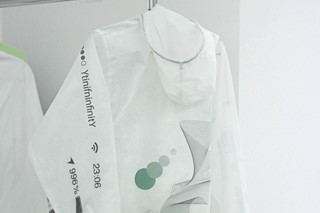 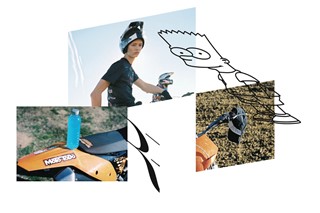 Designers like Barragan, Seth Bogart and Peggy Noland at Wacky Wacko, and Gareth Wrighton of pop-culture corner store ebaE are all about twisting the nipple of brand culture and re-appropriating its meaning to create something truly unruly. Theirs is a reservoir of garments that mines the loyalty of MTV’s True Life fans, acerbically slaps the painted-nails emoji on a snapback and warps Miley Cyrus’s name to fit the Harley Davidson logo. Burger King becomes Bikini Kill. A pair of flip-flops are amusingly elevated with a heel.

For Barragan, it’s been a pretty quick rise. His Tumblr was a base for his reblog-ready garms to gain some traction, and they did. “It started as a stupid dream and now the brand is paying my rent, holidays and everything else,” he says. “It’s part of my life now!” Even though his clothes appear to scoff at the monogram-infested world of fashion, it’s really a fond tribute. “I’m in love with logomania. I get really obsessed with consumer products and corporate manipulation. I mix them with references to my childhood: Napster, Kazaa, AOL, video games…” he trails off, listing no-longer-relevant web 1.0 brands that have found new life on the front of his and others’ T-shirts. In his world, any brand is fair use – infringement not intended, of course. So where did the idea to commandeer logos originate? “The first time I saw something similar was with Raf Simons, from the early 2000s, which went viral online (Simons’ SS03 Consumed collection took familiar logos, cut them up and turned them into fabric prints and body makeup). I guess not many people can afford stuff by the expensive brands they love, and that’s really sad.”

This sentiment is echoed by Peggy Noland, who occasionally designs for Bogart’s LA-based label Wacky Wacko (the Bands vs Brands Tee, Exsqueeze Me Tee, Candy Crush Tee and Patches Tee). “I wanted so badly to have the brands that other kids in school had,” she sighs. She had to resort to Tipp-Ex to fake a wobbly Nike logo in order to hang with the cool kids. “I remember the nervousness of getting on the bus for the first time with my fake Nike bag, tricking myself into thinking I was smarter than the system, and hoping that my obviously handmade brand was good enough to pass.” She would even buy pairs of Abercrombie & Fitch jeans, unsew the label and resew it in to different pairs of Walmart jeans to make it look like she had multiple styles of the same jeans. What she did then she does now, only on an exponentially larger scale. “Even if I wasn’t subverting other (larger) companies’ logos, I would be participating in branding my own label – so I am really no different on that end. The difference, beyond the obvious, is that I am creating regardless of what sells and not letting that dictate what I make.”

What seems to underlie all of these creators’ visions is accessibility. It’s fun to look at fashion, but not so much if your overdraft is maxed out. Theirs is a whole other kind of high street. “With DIY culture it has always been about being innovative with the everyday things around you,” says ebaE’s Gareth Wrighton. “We live in a world where everything accessible to us is branded in some way, so I think naturally that will seep into what you make.”

“I love the idea of not being able to afford something and just making your own version or buying a cheap knock-off instead,” adds Bogart. He’s doing something right, as just this year he brought his punk ethos to a print for Saint Laurent. The crossover into high fashion is complete, but is the fake finally trumping the real? “Often I feel like a cheap imitation aesthetically looks better to me than the real, out-of-reach thing,” says Bogart. “It’s amazing that brands create a whole illusion of exclusivity and luxury and then you can go get the $5 version of a $30,000 thing and feel the same way but have a cool little secret.” 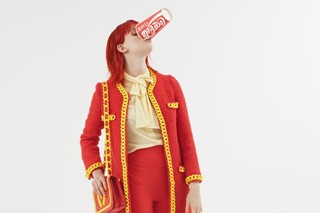 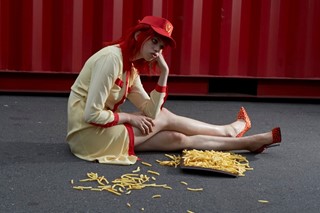 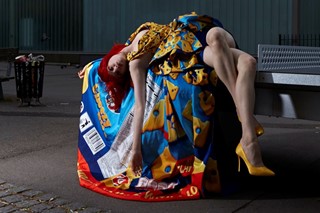 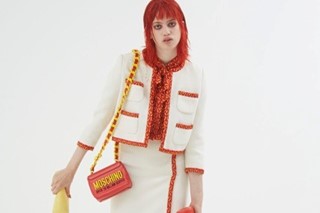 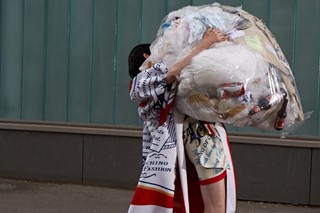 There’s no illusion here. What you see is what you get, and business is booming. With the customer who can’t shell out for Moschino McDonald’s, it makes sense for people like Bogart and Wrighton to take part in fashion the only way they can: by designing for themselves. There is no underlying motive; no agenda to open fissures in the impenetrable world of international branding or taunt an impending lawsuit. Ask why they do it, and they’ll tell you it’s “so I can wear it myself” (Bogart) or “because it’s really fun” (Barragan).

“The idea of taking a brand that already exists and making a really poor-looking version of it, with acrylic or puffy paint, is really aesthetically pleasing to my eyes and also funny,” says Bogart. “I think fashion should be funny. Seriously!” And let’s face it, fashion fades, but the logo is eternal.