Including a fashion show, fragrance launch, and Kate Moss and Marc Jacobs hanging out with drag queens 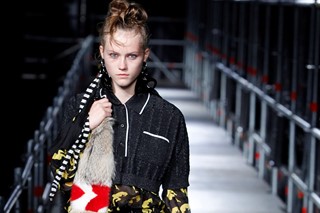 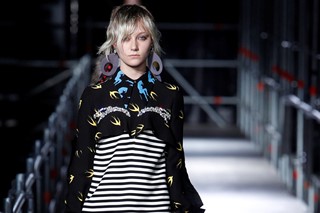 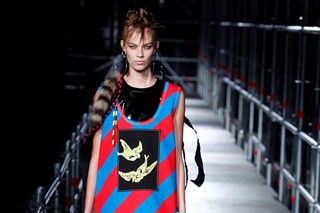 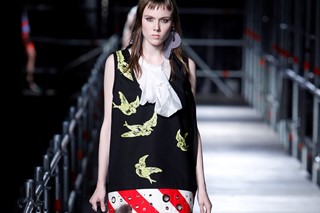 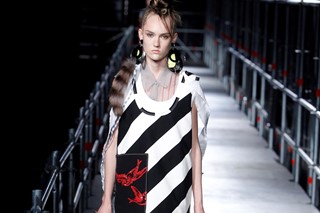 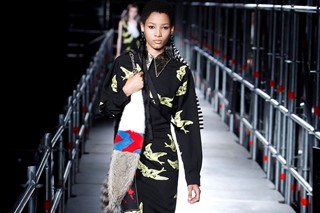 This weekend, Miu Miu kicked off couture week with a triple threat fragrance launch, Resort show and party, building their own club in Paris for one night only. This is everything you need to know – from the models to the music.

Considering France’s modernist architectural history, constructing an industrial nightclub in the circular, Art Deco walls of Paris’s Palais d'Iéna might seem like a strange choice. But then again, if there was one word to take away from Miu Miu’s offerings this weekend, it was contradiction. The Miu Miu Club, a spectacular space where silver scaffolding, neon strip lights and hanging curtains of thick, construction site plastic sprung up in the centre of Auguste Perret’s historic building, saw the sweeping, distinctly 1930s staircase lit with Argento-esque red and blue lights, sofas and stools transformed with tactile, fuzzy carpet and specially designed Miu Miu Club matchbooks litter the smoking area.

“I’ve got the power!” So blasted the hook from Snap!’s 1990 chart smash in Frédéric Sanchez’s show mix, and you really did believe it of the gang that emerged in the new Croisière collection. Walking on a runway built around the edges of the space and literally elevated above the audience, they marched purposefully in reimagined archive prints, PVC layers, graphic slashes of black and yellow that implied danger and trailing foxtails. The club-ready blue and red stripes of the clothes were echoed as a motif in the space, while patched across jackets, skirts and dresses was the same Miu Miu Club print that appeared on disco-flyer style invitations. For the finale, the troupe charged down the centre of the dance floor, making their way through the cheering crowd.

For an occasion like this, you bring out the big guns. Casting director Ashley Brokaw hit a home run with a team of top girls – Mica Arganaraz kicked off proceedings followed shortly after by Brit superstar Edie Campbell, making a surprising debut for the house. Also spotted: Prada AW15 campaign girl Lineisy Montero, Balmain army member Ysaunny Brito, Saint Laurent star Kiki Willems, and other heavyweights including Lindsey Wixson, Lexi Boling, Binx Walton, and Hanne Gaby Odiele, who was kicking it in a pair of baby pink cat-decorated cowboy boots. Borrowing the Miu Miu Club t-shirts worn by the waiters, after the show the models scattered into the party to let their hair down (metaphorically speaking for some, who chose to keep their punky up-dos as they hit the dance floor).

It wasn’t just the young blood models that put in an appearance; a gang of Supers (the kind you only need to refer to by first name) were out in full force, including Kate Moss in a dress from Prada’s hot-off-the-runway Resort collection, shown just two weeks ago in Milan, Naomi Campbell and Amber Valletta. Fragrance face Stacy Martin led the gang of actresses in attendance, from the legends (Maggie Gyllenhaal) to the rising stars (Dazed 100’s Kiernan Shipka, Elizabeth Olsen). Also spotted: Miuccia herself making her way through the crowds, Marc Jacobs hanging out with the queens of Drag Race, and industry icons like editor Grace Coddington, make-up legend Pat McGrath and hair artist Guido Palau.

This is what it was all for. After 22 years, the time was finally right for Miu Miu to release their first fragrance, a scent inspired by the rule-breaking women the house epitomises (specifically, the “intelligently frivolous, fearlessly fun, seriously lighthearted, feminine feminists”). First announced back in May, Nymphomanic actress Stacy Martin is the perfume’s face, appearing in the just-revealed Steven Meisel-lensed campaign with a super-sized quilted bottle (the colours of which were echoed throughout the club) and even, in one shot, facing off with a kitten.