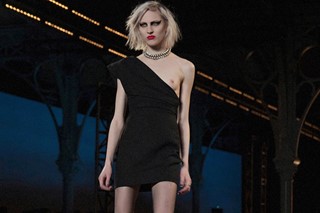 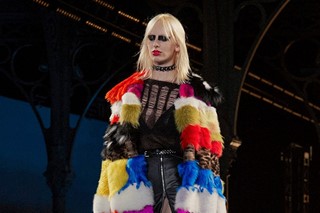 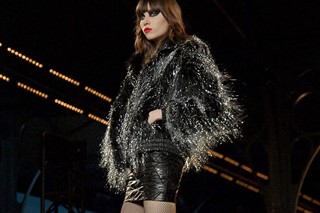 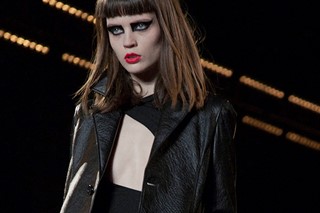 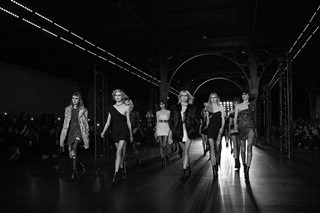 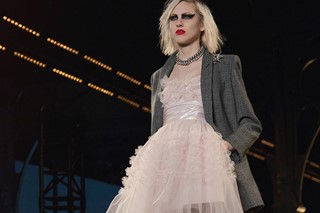 “Not your toys, silly boys” screeched the lyrics at last night’s Saint Laurent show. Taken from the new track “Pretty Boy” by Danish punk three-piece The Felines, it served as more than just heart-palpitating backdrop noise – it captured the angsty and fearless female spirit that reverberated through the collection.

Despite the abundance of sparkle, the collection was about throwing ‘the feminine’ off kilter – fishnet tights were shredded, slashed leather trousers revealed flesh and make-up was pushed to extremes, with thick superhero mask liner and blood red lips. Showing that the designer is au fait with #freethenipple, a model sauntered in a breast-baring asymmetric dress with that ‘don’t give a fuck’ attitude Hedi Slimane has nailed at Saint Laurent. A peroxide blonde Lili Sumner marched down the elevated, caged runway in a show-stealing patchwork fur coat, leather mini skirt zipped to the inner thigh and a black knit top run through with ladders.

“He drew the dirtiest thing he could think of”:

Artist Jim Shaw provided the images for this season’s printed manifesto. Renowned for his ongoing Thrift Store Paintings series (which sees him re-appropriate amateur artworks found in America’s culture scrap yard) earlier this month he told Dazed: “I seem to sniff out the apocalyptic in the world, while also being a cheery optimist.” It was a sentiment that echoed through the pages of Slimane’s selection of his artworks, with their focus on the underworld of Americana. They subverted classic comic strip and pulp fiction style, covered in the words “Destroy All Monsters” – the name of the punk band he founded with the late artist Mike Kelley.

The soundtrack to Saint Laurent AW15: