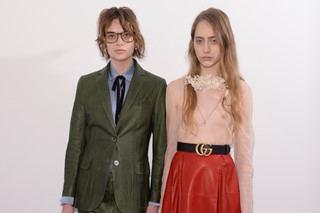 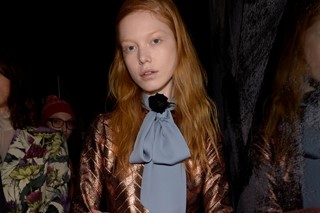 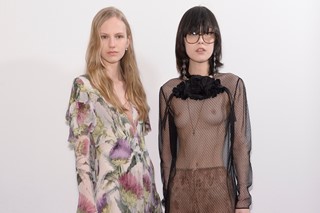 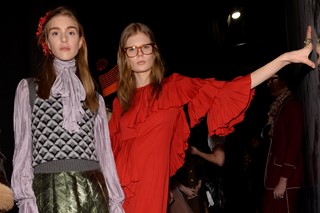 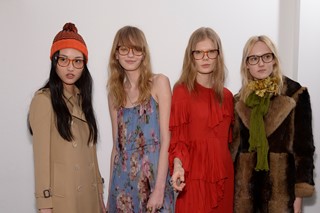 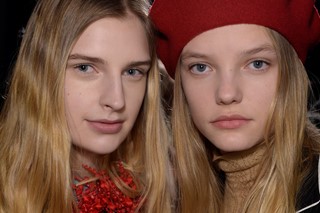 In a moody Milanese subway station, complete with red walls, harsh lighting and white tiles, newly appointed creative director Alessandro Michele took a brave leap forward with his first womenswear collection for Gucci. His woman was slightly awkward, madcap and nuanced in a way she had never been before, with a modern dandy to accompany her. Together they clothed themselves with remnants of the past and pieced them together in a way that felt like it was the here and the now.

The press notes began and ended with obscure existential quotes about the “contemporary” – in fashion speak, it’s what feels new and fresh. “Those who are truly contemporary are those who neither perfectly coincide with their time nor adapt to its demands,” was the Giorgio Agamben quote of reference. Michele was similarly ambiguous about this bespectacled, beret-wearing girl who might pick her way through Colefax & Fowler-esque florals, Georgian bird motifs, 70s-tinged metallic pleats and lurex knits, in a similar vein to the menswear show. “She’s in love,” he said after the show. “She feels the romanticism. She’s very contemporary through something that came from the past.” Mining the past to get to some unknown future is nothing new and has been used to great effect by the creative directing elite like Nicolas Ghesquière at Louis Vuitton or Raf Simons at Dior. It's no coincidence that Kering's crown jewel should also benefit from this historical redux, as Michele ushers in a new era at Gucci.

Suffice to say, Michele was a surprising choice, but certainly one that will give Gucci a distinct fashion identity. According to the New York Times, Anna Wintour was quoted as saying she found him “eccentric.” That eccentric vibe is what made the show all the more unexpected, and made editors welcome him with open arms as they came streaming backstage to congratulate and meet the man himself. You finally sensed there was the heart and passion in Michele and his team to make the Gucci girl a tangible one. She wore fluffy house slippers – an extreme take on the Gucci loafer – as though she was slothing around a bohemian house. Her hair was mussed up, and her blouses billowed about without looking too preened. You could grasp her character and feel like you’d want to emulate her. That’s fashion gold, and fashion is exactly what this new Gucci rising is centred around. It was an evocative eccentricity that paved the way for a more youthful and subversive Gucci to emerge.

The soundtrack to Gucci AW15: