Rei sees red: anger, love, heat, sexuality – all the associations of the colour are celebrated in a passionate collection that rages against the surface level 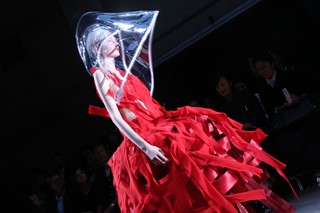 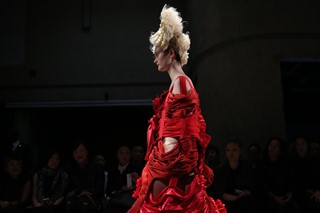 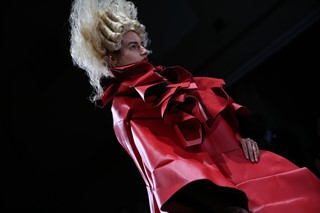 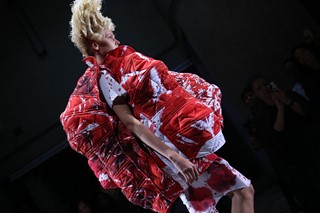 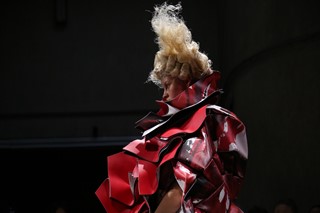 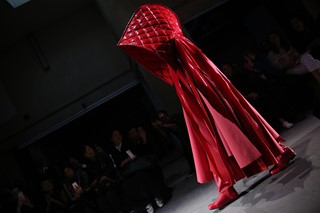 The mean reds – as termed by Truman Capote’s Holly Golightly – struck Rei Kawakubo, as she vented out equal measures of rage and passion at Comme des Garçons. They’re two extreme emotions we’re sorely lacking in the current fashion landscape, and when rendered in explosive silhouettes that roared and ripped through you to majestic metal track “Soused” by the experimental musician Scott Walker and Sunn O))), your heart (in itself a red bleeding thing) beat just that bit faster. Heat, sexuality, anger, love, joy, roses, blood boiling and open wounds – the associations with this one true shade of red – ran through our minds as Kawakubo explored the colour with shredded and tiered satin, cut-up leather and patent and acute shapes jutting in and out of the body. Each ensemble was an impassioned plea for us to look, feel and react. And we did, with once again the loudest applause lingering long after the final model had exited this derelict warehouse space in the East side of Paris.

The hair was bleach blonde Marie Antoinette gone mad, with a row of curls teased so that it stood on the ends into two wild bunches. The lips were red, of course. In two instances, the entire head was obscured by an oversized hood – one in quilted red patent belonging to Little Red Riding Hood, one in solid foreboding black as if it was the Grim Reaper. A more surreal apparition belonged to the final look, where the head was encased in a double layered protective plastic bubble hat – a concluding moment of clarity perhaps to the bloodshed, chaos and manic lust.

Rage against the machine:

In a season dominated by surface level prettiness and placid beauty, trust Kawakubo to rage against the machine and buck the season with one dramatic smear of red. Is she shaking us by the shoulders and asking us to FEEL – be it pain or joy? The collection certainly felt like it, as the Comme body was engulfed by either uplifting frills (and thrills) and open rosettes or on the other hands, twisted bandages and blood splattered sleeves. As a gesture, it was the jolt to the season that we were waiting for: a collection that yelled "Wake up and smell the banality!"