Perhaps on a merry-go-round himself, Marc Jacobs presented a carousel of confectionary and candied goods 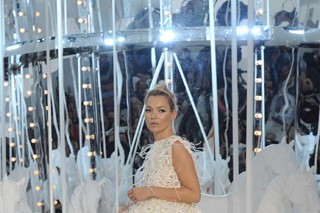 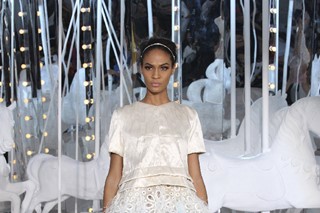 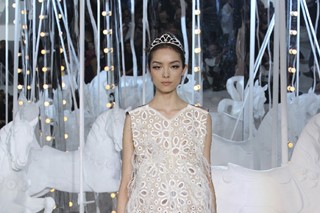 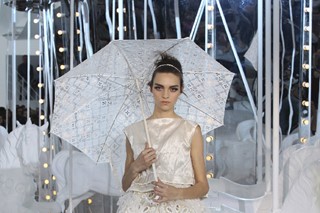 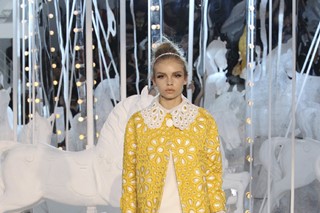 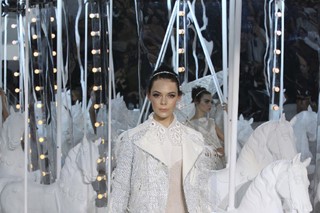 One can read too deep into the merry go round that was unveiled at Louis Vuitton's S/S12 show to gasps all round the room and what it means in fashion's recent turmoil in sending designers in and out of houses in quick rotation. It's tempting to read it as a farewell gesture on Marc Jacobs' part in lieu of his supposed departure to go to Christian Dior. This hasn't been announced and verified yet so let's just look at it on face value. It's a giant working carousel in a giant white tent in the Cour Carrée du Louvre with all forty-eight models perched on each horse ready to spin and walk. This is LVMH might and sky-is-the-limit budget staring at you.

The lavish setup did not however distract you from the clothes which were again, another show of strength on Louis Vuitton's part. His notes referenced craftsmanship and construction and that was hammered in home at every instance possible. Jacobs didn't stray from what has been a prevailing theme this season - the questioning and pondering of sweetness and hyper girlish femininity in a woman and their strengths. Jacobs gave the final word on that trend with this collection. Every possible source of saccharine sweetness that Jacobs could pummel into the collection was present and correct. The miles of broiderie anglaise in shades of sweet gelato and enlarged collars like girlhood's badge of honour. The patterns of all that broiderie angalise also punched holes into the outerwear.  Stiff organza layered over ostrich covered dresses to dim down the feathers and create a pristine sweet wrapper effect. The bags were similarly candied and pushed at every instance possible.

There were signs though that all this sugar wasn't just sweet for sweet's sake and there was a latent strength beneath it all that made you think Jacobs was perhaps alluding to something slightly more sinister. Leather made to look like srunched up paper, in flared out bell skirts and jackets, a continuation of those rounded shapes of last season's Night Porter collection, was one. Biker jackets gilded in pastel blue and ivory crocodile were another. The oversized flowers dotting the organza dresses and the feathers cascading down from empire line dresses that almost made some of the girls look pregnant were the final touch to make you question whether all this sweetness was just pure ostentation with nothing darker bubbling beneath it all.

Kate Moss' repeat appearance in the finale was the final cherry on top of this extravagant cake and left the audience wondering whether the merry-go-round would finally come to a stop and let one particular person off so that he might go on to the next ride of his life.