Living by the motto that beauty is the freedom to be fabulously ugly, Vlad uses their art to vent their trauma – in a fun way 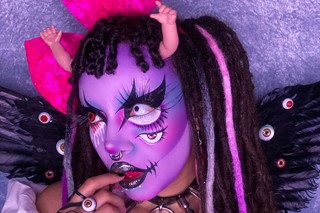 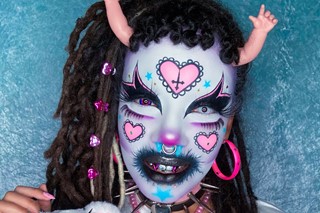 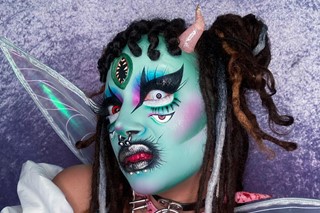 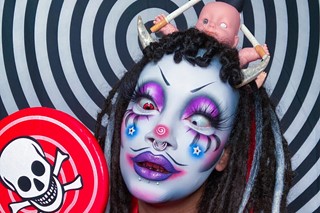 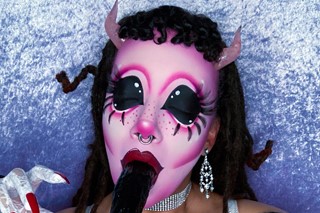 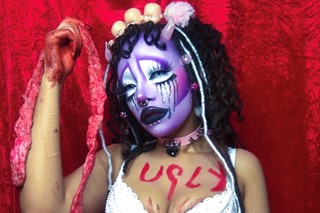 The Dazed Beauty Community is our ever-expanding encyclopaedia of creatives and emerging talent from across the world who are redefining the way we think about beauty. From supermodels to digital artists to make-up prodigies transforming themselves in their bedrooms, these are the beauty influencers of tomorrow who embody everything Dazed Beauty is about. Discover them here.

“Spooky, cute and spiky” are the three words Vlad Von Kitsch would use to describe their aesthetic. It’s pretty spot on. The Grimsby-born, Brighton-based drag artist is fast carving out a name for themselves with their trademark gorelesque (a mix of gore and burlesque) beauty looks that combine his deep passion for horror movies, drag and alternative music. These looks have seen him win this year’s Brighton Big Drag Pageant and feature in a pride piece for British Vogue last year.

Von Kitsch’s work draws from a rich collection of references, including films, literature and folklore, as well as traditional clown make-up and the corpse paint worn by the black metal artists they loved as a teenager. The result is an eclectic series of sweet-but-scary looks that act as an important form of therapy through self-expression.

“My performances often involve a lot of fake blood, stripping and grotesque sexuality wrapped up in a physically comedic package,” describes Von Kitsch who says their art allows them to present commentary on their experiences with mental illness, sexuality and oppression – and to vent their trauma in a fun way. “I am neurodivergent and can struggle to communicate big feelings, so getting half naked and pulling my guts out sometimes says way more than I could express with just words,” they say.

For Kitsch, beauty is the “freedom to be fabulously ugly,” a philosophy that underlies his hope that the beauty industry will continue to see more freedom of expression and embracing of flaws. Read on for a glimpse into Kitsch’s fantastical world, featuring their affinity to Frankenstein’s monster, their love for Grace Jones and the beauty products of their dreams (a skin cream that can make boobs appear or disappear? We’re sold).

Can you tell us a bit about yourself?

Vlad Von Kitsch: I am a Nigerian-British non-binary creative with a deep passion for horror movies, drag and alternative music. I grew up in tiny towns which always felt very restricting and hostile towards people like me, my hometown was extremely white and didn’t have much of a queer scene or even an alternative scene to speak of. Making the move to Brighton has allowed me to find my little community and a platform for my creativity I so badly needed.

What is it you do and why do you do it?

Vlad Von Kitsch: I am a make-up artist and gorelesque-drag performance artist. My visual aesthetic is heavily inspired by horror film and literature, folklore, traditional clown make-up and the corpse paint worn by the black metal artists I loved as a teenager. My performances often involve a lot of fake blood, stripping and grotesque sexuality wrapped up in a physically comedic package.

Like many others, humour is an important coping mechanism for me, and my art allows me to present commentary on my experiences with mental illness, sexuality and oppression and to vent my trauma in a fun way. I am neurodivergent and can struggle to communicate big feelings, getting half naked and pulling my guts out sometimes says way more than I could express with just words. I see the colourful characters I create with make-up as little parts of me, and when I paint my face I get to leave the real world behind and become that character for a few hours, it’s like a form of therapy.

How did you get into it?

Vlad Von Kitsch: I started really experimenting with make-up, fashion and self-portraiture when I was studying fine art in sixth form. I was struggling a lot with my gender and body image issues and having a sense of control over my appearance helped me feel less powerless about it all. I’d come into college wearing increasingly more flamboyant looks and eventually, my art teacher suggested incorporating that into my coursework since it had become an extension of my visual art practice, and my skills and concepts continued to evolve from there.

I learned make-up techniques from watching YouTube. Back then there weren’t many artists doing the kinds of looks I was interested in and I couldn’t afford high-quality products so it took a lot of trial and error to learn to execute my vision, as much as I cringe looking back of some of my early looks I do think having to take that DIY punk approach made me a better, more resourceful artist in the long run.

Which fictional character do you most relate to?

Vlad Von Kitsch: Frankenstein’s monster – I, too, am an abomination with daddy issues that longs for the company of other monsters.

Who is your beauty icon?

Vlad Von Kitsch: Grace Jones is definitely one of my biggest idols and her strip routine look in the 1986 film Vamp is the first that springs to mind. She’s wearing little more than head-to-toe body paint by Keith Haring, clown white on the face with bright red lips and heavy black liner. I’d never seen a vampire portrayed in this way, it has this uncanny, clown/club kid quality. All at once, she looks sexy and glamorous and slightly terrifying in a hypnotic way. The influence this had on me is probably quite evident in my work.

What does beauty mean to you?

Vlad Von Kitsch: Beauty to me is the freedom to be fabulously ugly.

Are you optimistic about the future?

Vlad Von Kitsch: I’m generally not an optimistic person, but I have learned that life is full of surprises. I can find comfort in the notion that maybe it’s all meaningless. We never know what the future holds, I didn’t expect to even be alive at 27 so I take things one day at a time and just try to keep doing the things that bring me joy.

What is the future of beauty?

Vlad Von Kitsch: I have no idea what the future of beauty is but I hope to see more freedom of expression and acceptance of petty ‘flaws’. There has been so much positive change in that direction in just the ten years I’ve been doing make-up, so while I don’t expect oppressive beauty standards to be completely dismantled anytime soon I think it’s possible that we can get to a place where the beauty world is less exclusive and cookie-cutter.

As a warning to the other members of the resistance, your head is to be mounted above the gates of the city. How would you do your make-up that morning?

Vlad Von Kitsch: Pastel lilac base with heavy blush, a huge prosthetic mouth sculpted into a permanent fanged smile, and ‘thank you’ written in cursive on my forehead in black glitter

It’s the year 2100. You’re the owner of the largest beauty tech company in the world, what five products or treatments will you dedicate your resources trying to invent?

Vlad Von Kitsch: A skin cream that makes boobs disappear within five minutes, and a companion product that makes them reappear.

A bald cap that can compress hair of any length and thickness to the point that it is completely invisible.

A mask device that instantly sucks all the make-up off your face.

Setting spray that makes make-up last for several days at a time.

A lipstick that is truly smudge/water/oil proof that doesn’t go crunchy or dry out your lips - this one is less fantastical. I'm just forever disappointed that it doesn’t exist already.