We went to El Segundo for James Franco’s clothes, a lock of Marilyn Monroe’s hair and one of the most important props in movie history 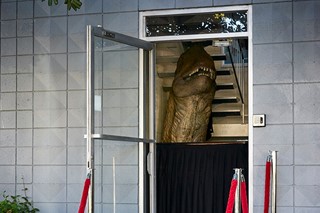 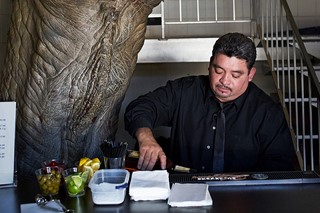 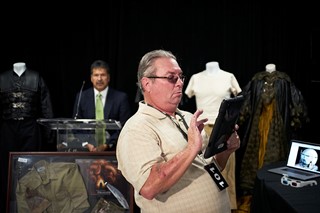 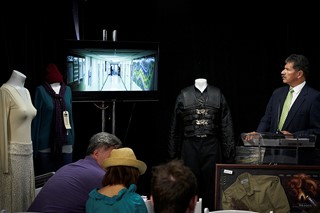 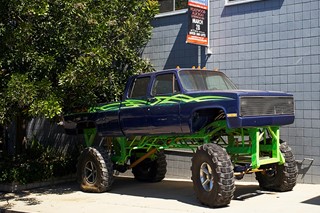 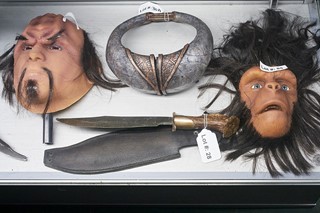 El Segundo is a coastal community just to the south of LAX airport, whose proximity makes it a perfect place for corporations like Raytheon, Boeing and Northrop Grumman to build aerospace and defense facilities. Standing among the oversized office buildings, factories and warehouses of El Segundo can make one feel like an ant.

The small city is certainly no tourist destination – even residents of Los Angeles might never find reason to travel there – but it’s also the home of Premiere Props, a warehouse chock-full of movie memorabilia waiting to be auctioned off. We got word of Premiere Props’ Hollywood Auction Extravaganza XVII, so we drove out early in the morning to see what exactly a movie prop auction is like. Spoiler alert: it was weird.

Premiere Props isn’t Sotheby’s: that much is apparent from the moment we step into the warehouse. Throughout the building, black curtains have been hung from ceiling to floor to hide clutter, but the debris that pokes through is surreal. An already sold, basketball-scene mannequin double of Michael J Fox from Teen Wolf faces the wall next to the copy machine like a punished wolfling. A box stacked high up in the lofted storage area reads “Indiana Joenes and the Tempel of Doom” (sic).

In the back room area, a preview of the auction’s secondary items lies in chaotic disorder inside a display case. This is where things get really weird. Mundane objects jostle with important fragments of film history: a random jewel box from the set of the TV show Friends sits cramped next to a dragon maquette by legendary effects designer Ray Harryhausen from The 7th Voyage of Sinbad (1958). Plastic bagels from Seinfeld rub up against a 105H shell MI mortar round projectile from the insignificant Johnny Depp vehicle Transcendence (2014).

Behind the display case, even more items are piled in mail bins and plastic containers. A friendly woman named Kim, who helps out during the auctions, pulls out a framed lock of Marilyn Monroe’s hair, obtained by her hair stylist in 1961. You can even buy James Franco’s Gucci sweater from This Is The End (2013) or a bottle opener from Weekend at Bernie’s (1989). Neither rhyme nor reason factors into the items for sale at the auction beyond the fact that these items have been near a film or television set, and have made their way to Premiere Props. In all, 526 lots are up for auction, causing one of the employees to sigh, “We’ll be here until 2am.”

In the preview area, a middle-aged man wearing a taupe polo shirt named Tim offers me advice on how to flip items from a movie auction. “Start out small,” he says. “I bought a dress worn by Gwyneth Paltrow here for $100 and sold it for $750. Then you can move on to the big-ticket items.” Tim constantly glances at an iPad, and knows almost everything about movie props. “I like to screen check things,” he says. “It gives it provenance.” By ‘screen check’, he means find the exact object on the screen in the movie or TV show. He points to a metal coathanger purportedly from 60s sitcom The Munsters that has a starting price of $50. “I would watch the show for scenes of the entranceway,” he says. “That’s where I’d find something like that.”

“I bought a dress worn by Gwyneth Paltrow here for $100 and sold it for $750. Then you can move on to the big-ticket items” – Tim, auction-goer and Paltrow enthusiast

Tim’s partner, sat nearby, mutters to herself, “Mmm-mm-mm.” She stops in front of a case that has several magazines in it (including a rare copy of the satirical rag Spy from 1993 featuring a photo montage of Hillary Clinton in bondage gear on the cover). She scans the case, and then the auction catalogue. “Do you have the other TV Guide? It says in here there’s the one with the baby on it,” she says to the woman behind the counter. The woman produced the TV guide.

“That’s the first TV Guide ever,” says Tim. “It’s very sought after. And you know whose baby that is? Lucy’s. That’s Desi, Jr.”

The two of them seem to be on the hunt for baby-themed items, and they look almost frantic tracking down a baby carriage from the recent Tim Burton film Big Eyes (2014), about pop artist Margaret Keane. “Where is that pram?” Tim mutters under his breath.

Dan Levin is the man behind Premiere Props. He calls himself a “curator”, but his official title is the executive vice president. He is a smallish, plastic-looking man who talks quickly and smoothly. (He doesn’t have the greatest reputation online – a few folks have called out the auction house for non-payment, and one former propmaster was even arrested by El Segundo Police in a dispute over his items, which he has detailed in online forums.)

I ask Levin who the big memorabilia collectors are. “A lot of them don’t like to be announced – it’s a hushed circle,” he explains. “People like Steven Spielberg and Tom Hanks, we know they’re collectors, but the real collectors like to stay out of the spotlight.”

Some of the items, though, are little more than meaningless trinkets from the movies. James Franco’s sweater from This Is the End, for example. Who on earth would want this stuff? “OK, ‘I’m a James Franco fan, I want to buy his wardrobe,’” he says. “(Or) they’re Johnny Depp fans – they’re not buying it for Transcendence. You’ve got the diehard fan that will buy Justin Bieber’s wallet, and then you have the fan of Independence Day, because that’s their favorite movie of all time, and they just want to own a piece of it, they don’t care what it is.”

“Sometimes they’ll get stuff for Halloween. I’ve heard someone say, ‘Don’t tell anyone, but I wore Mel Gibson’s costume from We Were Soldiers’” – Dan Levin, executive vice president at Premiere Props

He laughs when I ask him if people wear the wardrobes. “Sometimes they’ll get stuff for Halloween,” he says. “I’ve heard someone say, ‘Don’t tell anyone, but I wore Mel Gibson’s costume from We Were Soldiers.’”

As I flip through the catalogue, I mention that some of the items are downright weird. “The weirdest thing we’ve ever sold is Larry Hagman’s motorhome from Dallas,” he says. “Hagman went to Burning Man in it, and then he used it on the Dallas show as a dressing room. The collector that bought it saw us on the news, and he was a big Burning Man fan, and a Larry Hagman fan, but wasn’t a Dallas fan. He came the next day and drove it away.”

Just before the auction goes live at 11am, tensions are running high. A heated but hushed argument takes place between Levin and a biker-looking fellow. The workers nervously set out bagels and cream cheese. The anxiety, it turns out, is for good reason: Premiere Props is about to sell what is far and away their biggest-ever ticket item.

The live stream is about to start up, and the auction house has hired Leo Quinones as the live stream’s host – he’ll be telling the online bidding audience about the significance of each item, a bit like a late-night shopping pitchman. (Quinones also chairs events at all the casinos in the desert, and is quick to mention his 83,000 Twitter followers.) He sits in a faux director’s chair in front of a camera, mumbling factoids about the lots to himself, getting prepped for the cameras to turn on and beam him live over the internet.

Next to him is Gene Kozicki, a ginger-bearded effects guy who worked on films like Titanic and Garfield 2.

The story goes, according to Kozicki, that after Stanley Kubrick’s 2001: A Space Odyssey wrapped in 1968 in London, all the props were stashed in a storage unit on the MGM British lot. By 1970, MGM needed room in storage, so they destroyed all the 2001 props. However, this one space shuttle prop, the Aries 1B trans-lunar space shuttle, created over three years by the visual effects team, somehow survived, and was in the possession of a teacher, who had kept it in his classroom. The inside electronics had been gutted, but the ship – just less than a metre tall, and three meters in diameter – was dusty but intact.

The item sits on a wobbly table. Levin asks a few people to be careful as they walked by it. A few people filter into the room. “Have a good auction,” says the auctioneer, a man with a moustache and soul patch who has the whole auctioneer patter down from his year-long stint in real estate auction.

The auction begins with some rock’n’roll lots – a sheet of autograph paper with all four Beatles signatures on it that sells for $1,500. Then, a lenticular postcard from Japan with Richard Avedon’s Beatles photos behind a woman who, if you turn the postcard, becomes nude. That doesn’t sell. A pillowcase that Michael Jackson has signed, “I love you forever, I must sleep now. Love, Michael Jackson,” and thrown out the window of the George V Hotel in Paris.

But it’s all in anticipation of the Aries 1B. The lot is estimated to go for $80,000–$100,000, but it soon becomes clear it will whistle past that. Levin is on the phone shouting out numbers. Tim, sitting in a folding chair behind me: “Jeez.” The number climbs past $200,000, before settling on $280,000. All told, with fees included, the Aries 1B sells for $344,000. Levin looks over at me, and mouths the words, “It’s going to the perfect spot.” Tim speculates that MGM bought it, or maybe Disney, who had a large collection of Star Wars items.

The buyer turns out to be the Academy of Motion Picture Arts and Sciences, and the purchase is big news, as the prop will be a centrepiece when the Academy cuts the tape on its museum in 2017. “We’re excited to add such an iconic piece of movie history to our collection,” an Academy representative writes in a statement the next day. “We look forward to sharing the 2001 Aries 1B trans-lunar space shuttle with the public once the Academy Museum opens.” Everyone writes about it, from The Hollywood Reporter to The LA Times, but none of them were in that little room with a dozen folding chairs, the walls covered in black curtains.

It’s a major moment in film history, but back in the auction room, everyone is already moving on. There are more than 500 more lots to get through. The auctioneer starts bidding on Brad Pitt’s knife from Quentin Tarantino’s Inglourious Basterds (2009), which I heard Levin refer to as “Glorious Basterds” just moments before. Soon, they’re down to Seinfeld’s plastic bagels, the starting bid at $50, deep in the heart of El Segundo.